The drivers battling to change Formula 1 need the backing of the FIA, F1 itself, and us 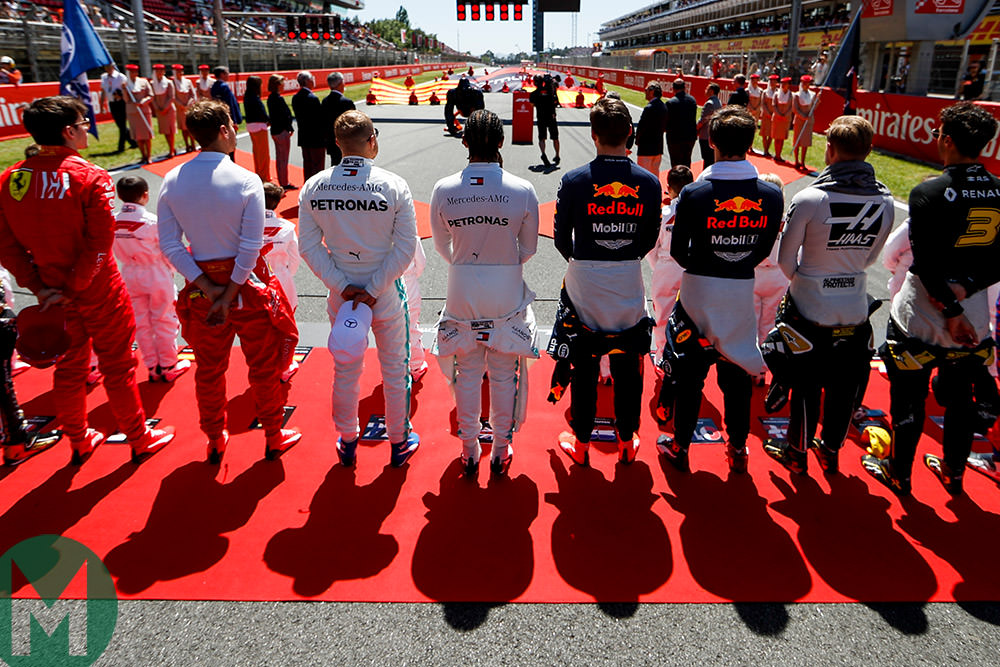 The F1 drivers line up before the 2019 Spanish Grand Prix Photo: Motorsport Images

Lewis Hamilton would not normally be as expressive about his feelings of the sport’s future as he was after the French Formula 1 Grand Prix. He was talking as the postponement of the 2021 regulations from around now until October had apparently opened a late opportunity for change. But although it’s unlikely in the extreme we’re going to see anything unexpected – the current hybrids and an all-new aerodynamic package and low-profile Pirellis – his critical voice as the highest profile driver will reverberate.

“It’s really important for people to realise it’s not the drivers’ fault,” he said after the dull race at Ricard. “This is a constant cycle of Formula 1 for years and years and years, even before I got to Formula 1, and it’s because the way Bernie had it set up and the decisions they were making back then, it’s still the same. Until that management structure changes, it will continue to be the same, in my opinion.”

He’d been to an FIA World Motor Sport Council meeting – along with Nico Hülkenberg and Alex Wurz – representing the Grand Prix Drivers’ Association. “I was really happy to be a part of it,” Hamilton said. “We were allowed to comment on anything…. I gave my opinion of three key points: weight, aero and tyres.”

He’s pretty adamant that the direction F1 has gone regarding weight is wrong. The hybrid cars require so much hardware – battery, intercoolers, electrical motors, plumbing etc – that they are up to 200kg heavier than F1 cars of 20 years ago. Seeing the current Mercedes alongside, say, a 1970s Brabham is to be shocked at how much the cars have grown. The Mercedes W10 has a wheelbase about the same as a long wheelbase Ford Transit. That sheer bulk is partly to accommodate the intense technology of the hybrids, partly to generate aerodynamic performance. But it makes for cars that are truck-like through slow corners and – more importantly – are the heaviest, torquiest and most aerodynamically powerful F1 cars of all time.

Then we put them on control tyres that, unsurprisingly, cannot really cope. So we can have thick-gauge tyres that blister and have to be driven two-three seconds off the pace or thin-gauge ones that many teams cannot get working properly. That may not be a Pirelli thing, but may simply be what happens when you try to put that much load through any tyre of that size.

Which tells us that the whole concept of the car is wrong. F1 has tied itself in knots through:

In sporting regulations it has done much the same thing through:

These knots are slowly strangling the life out of F1. The new regulations show great promise in simulation regarding the aerodynamics. But there’s a general feeling – expressed by Hamilton and thereby carrying some real power – that they otherwise are nowhere near radical enough.

At the very least F1 needs most of the sporting penalty system ripped up and thrown away, replaced by a tough referee, one not afraid to use a black flag where appropriate. It needs a light and simple engine so the cars can be small and manoeuvrable, allowing the tyres to work. It needs a tyre war to help give competitive variation and better mechanical grip.

2019 Austrian Grand Prix preview: has Bottas run out of porridge?

The timing of a Hamilton-led campaign to get the drivers – who have traditionally been sealed out of such discussions – involved comes in this tiny window of opportunity created by the postponement of the regulations from now until October. It might be the only way to get F1 out of the stalemate it’s landed in because of the restrictive alliance between the manufacturers, FIA, teams and Liberty.

A wild public support of the drivers’ position on this might be the only thing that could make F1 stop and think again, at the 59th minute of the 11th hour.