The Lewis Hamilton–Max Verstappen Silverstone row shows little sign of abating, with the FIA announcing a review of British GP first lap incident after being petitioned by Red Bull.

Representatives from both Red Bull and Mercedes are now required to attend a video hearing on Thursday to once more look at the incident, on which debate has raged as to whose fault it was, whether Hamilton’s resultant 10sec penalty was justified and how severe it should/should not have been.

Hamilton was initially given a 10sec time penalty for his part in the accident, in which he drew up alongside the Red Bull heading into Copse, before his front left wheel connected with Verstappen’s right rear, sending the Red Bull crashing out of the race. 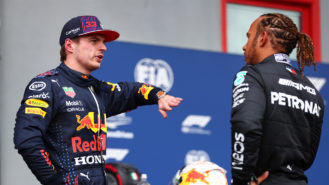 An incensed Red Bull team boss Christian Horner accused Hamilton of “dirty driving”, whilst the head of its young driver programme Helmut Marko called for Hamilton to be banned, before Verstappen then accused the British driver and his team for being disrespectful after it celebrated whilst the Dutchman was still in hospital.

Horner then later said that the accident had “massive ramifications in a budget cap era” after Red Bull claimed that the crash had cost the team $1.8m (£1.3m).

“It is no secret that we felt at the time, and still feel, that Hamilton was given a light penalty for this type of incident,” he went on to say. “Given the severity of the incident and the lenient penalty, we are reviewing all data and have the right to request a review. We are therefore still looking at the evidence and considering all of our sporting options.”

The FIA race director Michael Masi explained its penalty afterwards, but Red Bull appear determined to secure a harsher penalty for Hamilton, who now lies eight points behind Verstappen in the Drivers’ Championship.

“I think one of the big parts has been a mainstay for many, many years, and this came through discussions prior to my time between all teams, FIA and F1 and team principals,” Masi said. “(The teams) were all quite adamant that you should not consider the consequences in an incident, so when they’re judging incidents, they judge the incident itself and the merits of the incident, not what happened after as a consequence.

A virtual video reconstruction has also since been published, shedding further light on the key points of the incident.

The Crashalong footage highlights that whilst Hamilton didn’t take the ideal line into the corner, missing the apex, it also notes that both drivers were heading into the corner faster than they should have been on full fuel tanks – braking later, in fact, than Verstappen’s Q3 lap.