Christian Horner recently confirmed that it was highly likely Red Bull would be retaining Sergio Perez into next season, praising him for his contribution to the team. “He has brought us what we hoped for,” said Horner. “We saw him in Baku, where he won and gained excellent points in the constructors an on other occasions, such as in France, where he played as a true team player. We are very happy with the work he is doing.”

It’s not just Horner either. Pretty much the whole team has taken to him, appreciate the new knowledge he has brought them, with particular regards to tyre usage. That and his extensive experience of the Mercedes PU cannot have gone amiss. His performances have got the team out of having to consider the development of one of its own young drivers and just allowed it to concentrate on trying to win a championship with Max Verstappen, with Perez providing valuable on-track support when he can. It was his presence always in Lewis Hamilton’s pit stop window which prevented Mercedes trying to switch to a two-stop in France, for example, further guaranteeing Verstappen’s win.

Baku showed his contribution to fullest effect, where he was perfectly placed to pick up the pieces after Verstappen’s retirement to win the race and where his combative on-track attitude was a major contributor to Hamilton’s non-scoring. Prior to that he’d overcut his way past Hamilton at the pit stops too.

The team like him as its number two. But he doesn’t want to be a number two.

But that was the stand-out, not the norm, and there is a very big distinction between how satisfied the team is and how satisfied he is with his performances. He is still a long way off the qualifying pace of Verstappen and currently lies only fifth in the championship, two places behind Lando Norris who drives a significantly slower car. He has not really closed down the qualifying deficit to Verstappen since the start of the season and at 0.517% average it’s a big gap, translating into 0.41sec of missing lap time. That’s about as far adrift as Alex Albon was in his rookie part-season with the team in 2019 (albeit closer than Albon managed last year). It’s a significantly bigger deficit than the beleaguered Daniel Ricciardo currently has to Norris at McLaren (0.27sec). It’s not even close to the same ballpark as Valtteri Bottas’s 0.15sec deficit to Hamilton.

Those qualifying gaps are vitally important, not just as a reference, but when they put him behind slower cars on the grid. By the time he has found his way past Norris’s McLaren or Charles Leclerc’s Ferrari, his race has been badly compromised. 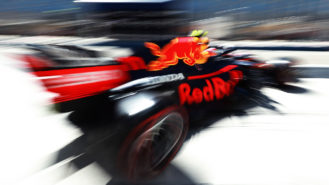 We need to be a little careful with the qualifying numbers because such has been Red Bull’s rate of development Perez has several times been one spec behind Verstappen. This was the case in France, Styria and Austria. But the tweaks to the diffuser and wings won’t account for anything like 0.4sec.

It’s a demanding car and there probably is something to the theory that part of its speed comes from a level of instability that Verstappen can exploit but which just slows Perez. After his initial brave statement at the start of the year that he was just going to go with Verstappen’s set up because that’s what the car likes, he has now begun to go back on as he desperately tries to find those missing tenths. But you can see every time he is asked a friendly and encouraging question about his progress, he is conflicted when he answers.

The team likes him as its number two. But he doesn’t want to be a number two. But he cannot give them any reason not to be. Which is fine with them, less so for him. This is such a tricky situation for him, because it’s the fastest car he’s ever had, the foundation for a level of success he’s not previously enjoyed – yet it’s the furthest off a team-mate’s pace he’s ever been.

We can debate how much of that is the brilliance of Verstappen (probably a lot), how much the traits of a car not suiting him (some), but it doesn’t alter the conflicted position he finds himself in. As he began trying to adapt the car more around himself around the time of the Austria races, the gap did begin to close a little, but it was back up again at Silverstone. Hungary we cannot fairly judge as what was set to be his final Q3 lap was timed out by the traffic shenanigans ahead of him. There’s no obvious reason to suppose he’s going to eradicate that gap in the second half of the season and – rather like Ricciardo at McLaren – he must surely hope that the 2022 generation of car, with aerodynamics totally unrelated to the current one can give him a clean-break re-set. Will it do so or will we once again see how a good driver puts into perspective the difference a great one makes?