Could Vettel vs Ricciardo II take place at Ferrari? 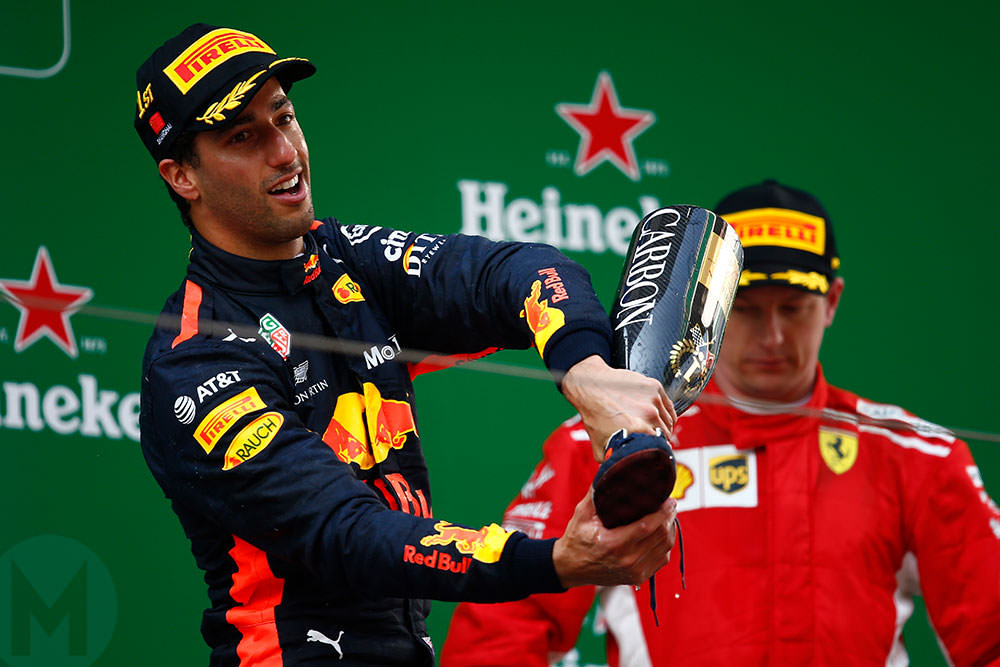 The Shanghai Formula 1 paddock was buzzing with the rumour that Daniel Ricciardo had signed an option to join Ferrari from next season onwards. Given that Sebastian Vettel is in just the first of a three-year deal there and Kimi Räikkönen’s contract runs only until the end of this season, if the option were taken up it would re-unite the 2014 Red Bull Vettel-Ricciardo line-up. There are several intriguing questions arising from this, but there was a certain irony that as this rumour began to swirl around, Ricciardo should take a brilliant victory in a race that had looked Ferrari’s for the taking after Vettel and Räikkönen had sewn up the front row by a comfortable margin.

There are many different types of contractual options, but this one is said to be on both sides up to a defined date (believed to be June 30). Up until that time, neither party can officially negotiate with another. Because the driver is effectively locking himself out of the market for that time, discussions for his post-2018 services are contractually ‘owned’ by the team (in this case Ferrari). As such, he will be paid a fee. Between now and then he and Ferrari can negotiate about a future contract. This is all conventional F1 practice.

Those privy to such matters at Red Bull are adamant that he has definitely signed something, somewhere but it’s not with them and it’s not with Mercedes. Logically, therefore, it must be Ferrari. The question becomes, does he follow up with a full Ferrari deal – or in the event he cannot agree terms with Ferrari, just keep the fee and subsequently extend with Red Bull (or switch to Mercedes)? Red Bull is said to be pushing for an answer by the end of the Monaco Grand Prix weekend (i.e. before the June 30 Ferrari option deadline). He cannot do any deal with Red Bull before that deadline, regardless of how much they may want him to.

As to whether he would agree to Ferrari’s terms, there are several considerations, quite aside from the money. But on that subject, at 29 years old this would have to be the big money deal that made his career. Not that he has been poorly paid at Red Bull, but those deals were set within an overall long-term contract (with the option on the team’s side) and so he could never leverage another team’s interest in him to up the money. There were certain measures of competitiveness the team was required to meet so as not to open a defined small window in time where he could go elsewhere (much as Vettel had in place and which allowed him to leave one year early to take up Ferrari’s offer for 2015). But this time around Ricciardo is properly free to negotiate for the first time in his F1 career.

The next stipulation Ricciardo would be seeking from Ferrari would presumably be equal status with Vettel. We don’t know if the contract Vettel signed last year contained the number one clause his previous contract was said (by someone very much in a position to know) to feature. There were indications that Vettel did not get exactly what he was originally asking for last year – a one-year rather than a multi-year deal, for example. There is surely no way Ricciardo would countenance going there as anything other than equal number one.

His stock is super-high at the moment and now is the perfect time for him to be pressing that home in his negotiations. If it happens, it offers the watching world a fascinating chance to see Vettel-Ricciardo II, the re-match. First time around, Ricciardo arrived in the quadruple world champion’s team and out-performed him. Not overwhelmingly, but convincingly. Was that just a trait of that particular car? Of Vettel’s mindset after a long hard slog of taking those consecutive titles? For those unconvinced it really was as it appeared – that Ricciardo was simply better – the re-match would surely be welcome.

Christian Horner is more than keen to retain his man. Helmut Marko seems to be more ambivalent. For F1 in general, Ricciardo in a competitive Ferrari alongside Vettel would be a sensational story.