The seasons of Ferrari and Mercedes – and by default of Red Bull too – could well be defined by how effective their Barcelona upgrades this weekend are.

Under the new regulations, porpoising and the cost cap are the twin devils ready to trip up any top team season campaign. The car-bouncing ground effect phenomenon which has so derailed Mercedes so far is there lying in wait for all teams.

The concern is that more downforce often comes with more porpoising – and the Ferrari is already troubled by the phenomenon. Developing the car before the porpoising is completely understood risks taking it out of its sweet spot – and spending valuable cost-capped resource in doing so! There’s an element of 3D chess in the development process for the top teams this year, as the twin challenges of porpoising and cost cuts is coming at them simultaneously but from opposing directions.

Ferrari is perhaps in the most nervy situation, leading the championship but with Red Bull coming back at them with a car that’s been faster in the last two races. Red Bull has done this by aggressively developing what was a later-gestation car than the Ferrari and which therefore suffered a more patchy and glitchy start. Ferrari by contrast arrived with an effective car it understood very well, with a nice wide sweet spot, a driveable balance and solid reliability. It suffers a bit of porpoising, notably more than the Red Bull, but at the sort of very high speeds only seen at the end of the longest straights and which stops as soon as the driver hits the brakes.

The temptation, especially with the cost cap restrictions, would have been to just keep ploughing the same furrow, relying on the car’s intrinsic quality to keep it in play and hope Red Bull’s development tails off soon.

But there’s no other alternative. A team cannot just sit still as its rival first of all erodes your initial advantage and subsequently reverses it. Ferrari’s response with its heavily updated car and whether it can halt or reverse Red Bull’s recent gains could define whether we have the close title fight that these first few races have promised.

For Mercedes the situation is not so much fear of turning a good thing bad as hope of the opposite. The upgrade is physically extensive, the floor quite different to before. But how well have the car’s underlying problems been understood? There’s a theoretical rocketship in the ‘zero sidepod’ W13 but that simulated performance hasn’t yet come close to being replicated in the real world. Is it forever unachievable, with a concept just fundamentally wrong? Or is there a big chunk of performance there just waiting to be teased out with the right tweak?

Meantime, Red Bull and Max Verstappen have the ability to blitz an entire weekend with a car relatively immune from porpoising yet still producing very good downforce, the elusive combination chased by the others. Put such a car in the hands of Verstappen and he can take the field apart. But it’s sometimes a little fragile.

Furthermore, with all the performance the team has put on the RB18 already, how much can be left, given the imposed cost constraint? “There’s plenty left in the tank,” assured Verstappen to F1 yesterday. Which potentially sounds a little ominous for the others and the complexion of the season could very well be one of Red Bull domination after a shaky start. But not if either – or both – sets of developments on the Ferrari and Mercedes hit paydirt. Today at Barcelona is when we begin to find out. 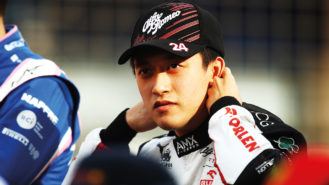