I have known Derek Bell for about 25 years. Which is the about the same period of time you’ll feel you’ve known him approximately ten minutes after meeting him for the very first time. Derek is just like that. Is now, was then, always has been.

When you meet him for the first time his eyes will fix on yours, friendly, sincere and focussed not somewhere in the middle distance in the hope of finding someone more interesting, but clearly and singly on you. And here comes the killer line. It’s nothing you’ve not heard thousands of times before, but in this context it’s completely unexpected.

‘How are you?’ It’s such a simple gambit but delivered so it beats your hastily prepared introductory ‘Hello I’m…’ patter by at least three lengths, it has a knock-out effect. You know as well as you know the sky is blue that you are going to like this bloke; this bloke to whom you have yet to utter a single syllable, this bloke who, implausible as it is, seems at least as interested in you as you are in him. This former Ferrari F1 driver, double World Sportscar Champion and five times winner of Le Mans.

But what is really implausible is that today, Derek Bell hits 80. Still racing, he looks ludicrously fit and well, the last 20 years of ageing being something he appears able to have opted out of entirely. 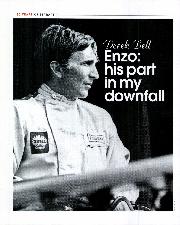 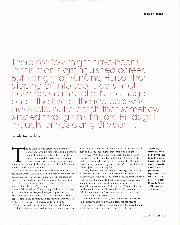 Partly because he spends half his life on the other side of the Atlantic, I’ve not sat down with Derek for a couple of years, but when last we did, in a pub during a Goodwood Revival weekend, I can remember an evening spent listening to stories that literally made me cry with laughter and which are entirely unrepeatable here. He was the life and soul, making a handful of journalists feel like his best friends. It’s why when he stopped earning a living racing for car manufacturers, he started another being an ambassador for them instead. Because who’d not want their interests represented to customers and the media by Derek Bell?

And yet I have always detected a slight vulnerability there too, an occasional need to explain why he was not even more successful than he was. Is it perhaps because those achievements for which he is most famous – all those victories in long distance sports car races – let’s not forget his three Daytona 24-hour victories either – only happened with the help of team-mates? If so let’s not forget those two World Sports Car Championships. And this: throughout Porsche’s involvement as a factory team in the halcyon era of Group C racing, just one driver was it retained from its point of entry in 1982 to its withdrawal after Le Mans in 1988: Derek Reginald Bell.

Memories of Derek? As a driver, Le Mans 1995 where he shared the yellow Harrods McLaren F1 GTR with Andy Wallace and his son Justin. It is well known that they should have won, and but for a failing transmission would have won, but he still rated standing on the podium with his boy as his greatest moment in motor racing.

What is perhaps less well known is just what a difficult car that McLaren was to drive with almost no downforce, especially in the wet, and this was one of the wettest Le Mans of all. And I remember in that filthy night the freakishly talented JJ Lehto in the works-owned Ueno Clinic F1 GTR reeling in Justin. Years later a charmingly embarrassed JJ told me there were laps he was half a minute quicker than anyone else on the circuit that night. Faced with losing their lead, the Harrods team pitted Justin, installed Dad behind the wheel and sent him out. And suddenly the rapidly dwindling gap shrank no more. At the time JJ Lehto was 29 and had been an F1 driver for the previous six seasons. Derek was 53. 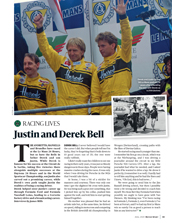 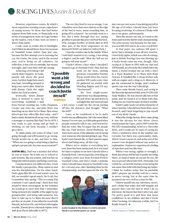 The Andrettis, Mansells and Brundles have raced at the Le Mans 24 Hours, but so have the Bells in father Derek and son Justin. While Derek is famous for his…

As a person? A strange one, but one that to me seemed to encapsulate the best of Bell in a single moment. It was five years ago, and we were on a not very famous race track somewhere out in the middle of the California desert. And, strangely enough, we were in an enormous SUV, for this was the launch of the Bentley Bentayga and Derek had been an ambassador for the brand ever since its return to Le Mans at the turn of the century.

We were three up, chatting about this and that, probably not thinking too much about the not very relevant business of lapping race tracks in 2.4-tonne off-roaders, when one of us said something funny and we all started to laugh. We were doing about 110mph at the time and it is fair to say that perhaps as a result of the gale of giggles in the cockpit, Derek did not enter the quick curve with quite the degree of precision achieved on previous laps. The car slewed and we were suddenly sideways at vast speed in this massive motor. It took us all by surprise. In an instant all the opposite lock was on, the car was straightened out and we were on our way. He didn’t even lift; I doubt he even stopped laughing.

And that’s Derek. I think there is this perception that if you are to make it in this business you ultimately have to be a bit of a shit, or at least have that within you. And perhaps you do if you want to become the Formula 1 World Champion. And if Derek’s failure to scale the very highest heights of his sport is a result of him missing that critical quality, I say all credit to him. Because as I have said many times before, I don’t really care what you achieve in the car if you’re a pain in the arse outside of it. And Derek was never that. Blindingly quick when he needed to be, faultlessly reliable the rest of the time and always there with a smile, a joke and an outstretched hand making yet another fan feel they’ve known him forever. That’s my kind of racing driver. Happy birthday Derek, I hope we catch up soon.