Alex Lynn was as surprised as anyone when he lost his Sebring 12 Hours team-mate Kevin Magnussen to Formula 1 in the run-up to the Florida classic last weekend.

As the Dane returned to Haas for a glorious F1 comeback at the Bahrain Grand Prix, qualifying an amazing seventh and finishing an almost unbelievable fifth, a great story in the Middle East also had a happy ending for Lynn. On  the other side of the Atlantic he, Earl Bamber and Magnussen’s replacement Neel Jani scored a landmark win for Chip Ganassi Racing’s (CGR) Cadillac squad.

“I found out the same day the world found out,” says Lynn, now back home in the UK and reflecting on a remarkable couple of weeks. “I got an email from Mike Hull at CGR that was only addressed to me and Earl, saying ‘can I have a call with you two in the morning?’ OK, but strange that Kevin isn’t cc’ed. The next morning I saw the Sky Sports headlines with a question mark: is Kevin Magnussen heading back to Haas? So I guess that’s what our phone call is going to be about then!”

Magnussen’s sophomore season in sports car racing proved short-lived. The 29-year-old made a predictably strong code switch last season after Haas dropped him at the end of 2020 and seemed at peace that F1 was now in his past. A dual campaign with Ganassi in IMSA and – once it gets going – with Peugeot’s stunning 9X8 Hypercar looked the perfect way to wean himself off F1. But the surprise recall, to replace exiled Russian Nikita Mazepin, was just too good to resist and has of course been more than justified by that incredible performance in Bahrain, as Lynn readily acknowledges.

“For all of us our first racing dreams were F1,” says the former Williams development driver. “I don’t think you can deny somebody that chance. Kevin is fantastic. We only did one race together” – the Daytona 24 Hours in January – “but I was also at Road Atlanta last year to watch the team when he was driving. A super-cool guy and a fast team-mate, and a real fighter and scrapper. Certainly in IMSA those qualities go a long way. And he goes pretty well in F1 too.” 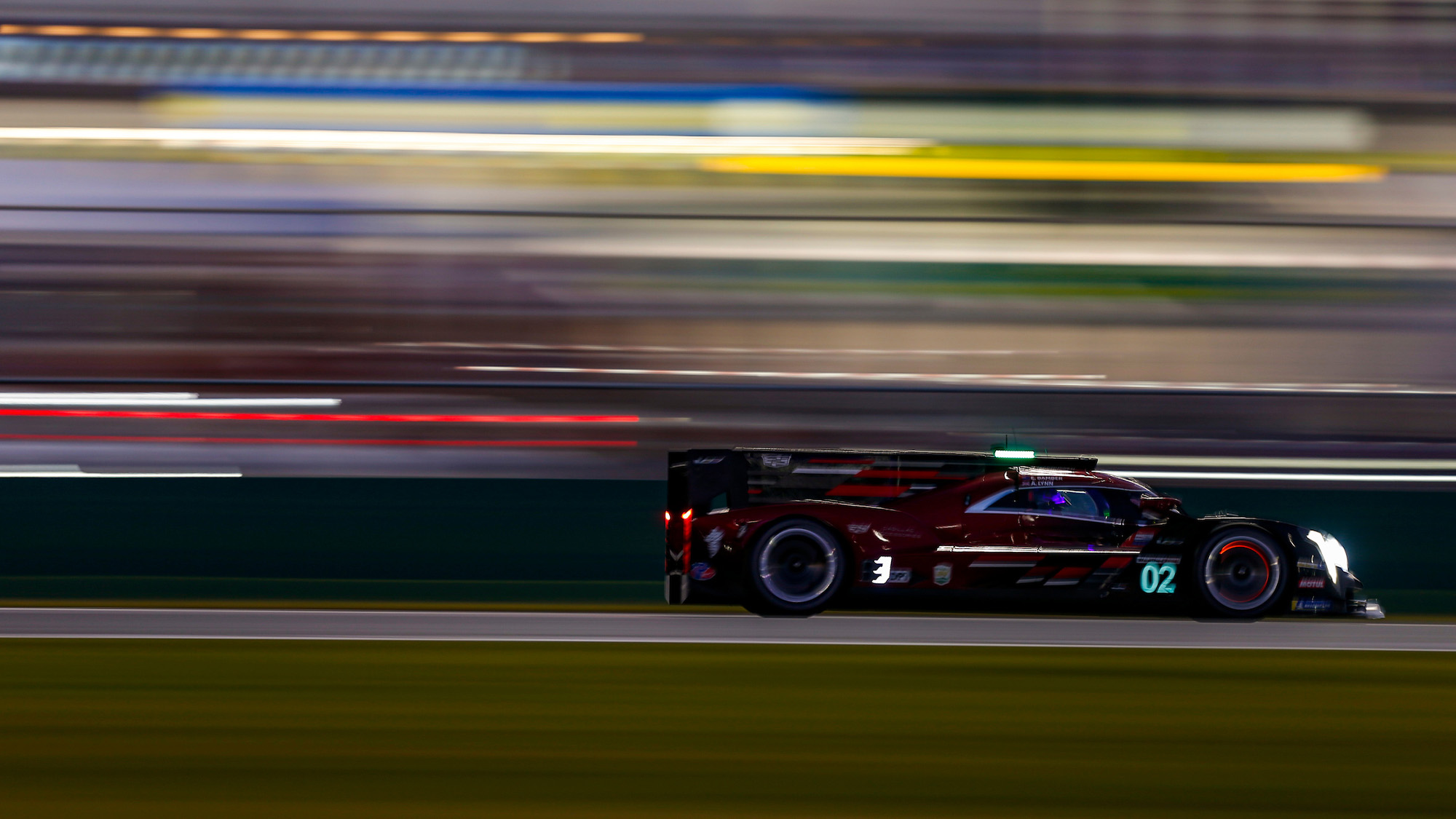 Lynn drove with Magnussen at this year’s Daytona 24 Hours

Lynn adds something else: “It’s a mark of the guy that one of the first texts I had when I got back to my phone after the race was from him. That was really cool.”

At the same time Hull told Lynn and Bamber of Magnussen’s departure they also learnt 2016 Le Mans 24 Hours winner and World Endurance Champion Neel Jani was being drafted in to fill the void. “Having someone of Neel’s calibre was perfect,” was Lynn’s verdict. “He’s a talented driver and also to come in very last minute, the one thing it takes is a lot of professionalism – and that’s exactly what Neel embodies.”

Lynn had raced against Jani in Formula E and knows all too well what the Swiss driver has been through after losing his seat. Porsche dropped him from its line-up after just one year, but as a seasoned pro he’s bounced back strongly, winning races in WEC’s Pro GTE category and finished second in the GT class last year at Sebring. Jumping into the Cadillac DPi-V.R was never going to be too much of a tall order for someone of his calibre.

“We don’t have a huge amount of practice, but he was straight up to speed,” says Lynn. “The Cadillac is a lovely car to drive, but also it’s a car that makes a lot of sense for a racing driver. The harder you drive it the more it rewards you in lap time. It’s not a confusing car.” 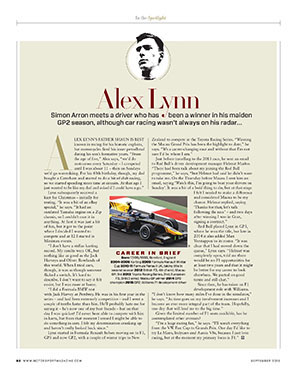 Simon Arron meets a driver who has been a winner in his maiden GP2 season, although car racing wasn’t always on his radar… Alex Lynn’s father Shaun is best known…

Lynn qualified the No2 Caddy in fourth position, behind the sister No1 entry as Sebastien Bourdais broke the lap record to secure pole position. “We felt really confident,” says Alex. “The car was giving us a good feeling all weekend, and to be honest we thought if everything was to go well our main competition on pure speed was going to be the No1 car, our team-mates. Unfortunately for them they were in trouble on the first lap.”

Bourdais pitted with transmission trauma, leaving the car he shared with Renger van der Zande and Ryan Hunter-Reay completely out of contention. It wasn’t all plain sailing for Lynn either as he picked up a drive-through penalty for overtaking under yellow flags. But the No2 recovered to take the fight to the Wayne Taylor Racing Acuras and as the sun set on a blisteringly hot day the Ganassi car began to exert its authority. It all looked good as Lynn handed over to Kiwi two-time Le Mans winner Bamber to bring it home – who then by his own admission “made a meal” of his final stint. This one almost slipped through their fingers after Bamber dropped the ball not once, but twice.

“Our lead was around 30 seconds when I came in,” says Lynn. “We were saving a lot of fuel because we had a nice big lead. You know what it’s like in IMSA – if there was to be a yellow it was important to have a quick stop strategy-wise, so at that point we were just nursing our lead and our fuel to make sure we were on the right side of a pitstop if needed. Everything was very relaxed, then very quickly it turned out not to be!” 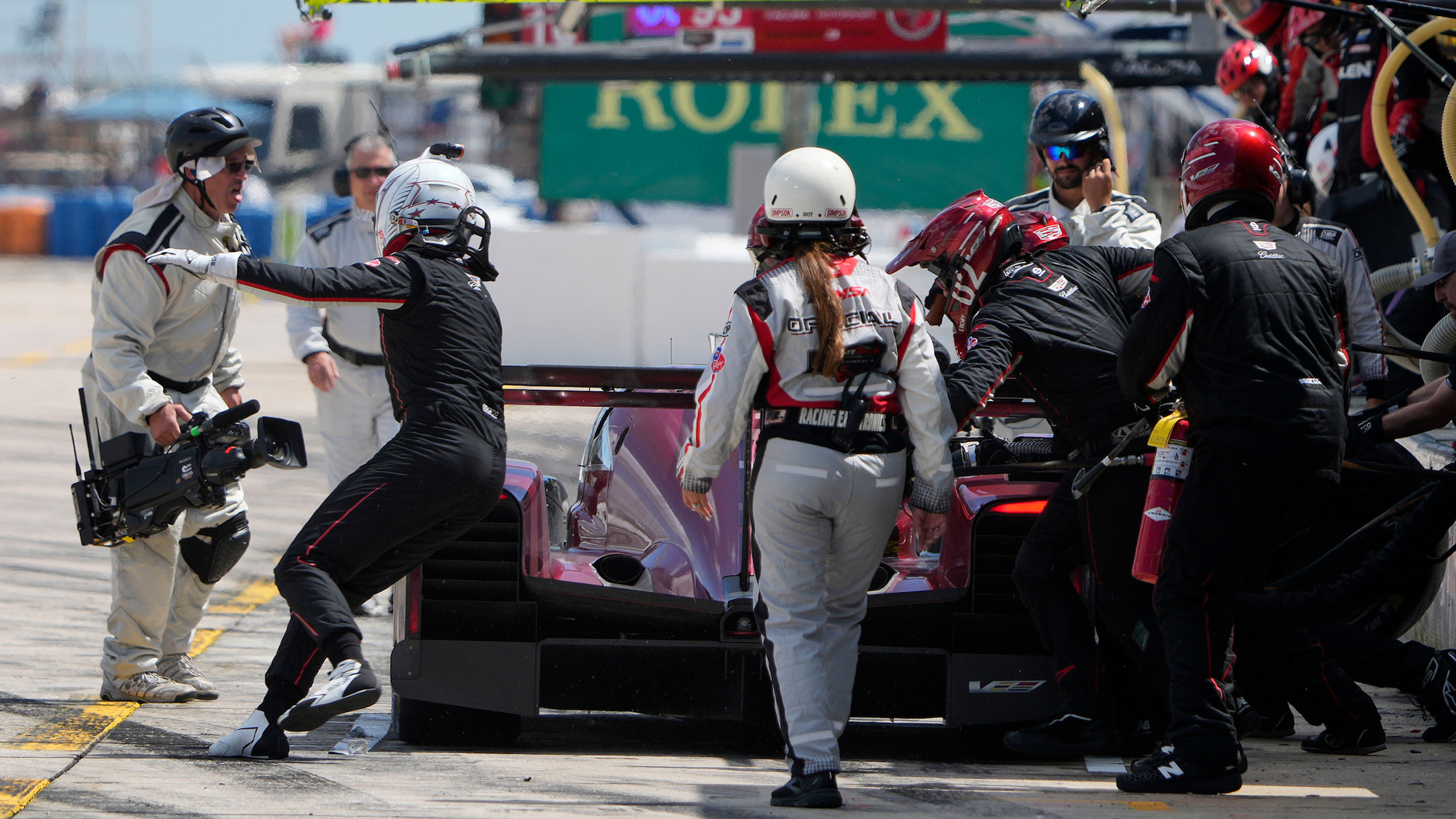 Bamber races in for his stint

Bamber’s first faux pas was to clip an LMP3 into a spin and earn himself a penalty, dropping him behind the JDC-Miller Motorsports Caddy of Richard Westbrook, the Briton sharing with two of last year’s winners Loïc Duval and Tristan Vautier. Bamber was quick to atone, catching and passing Westbrook with just under an hour to run – only to clip a Ferrari GTD on the same lap he’d taken back the lead! Again, he got his head down, made up a 6.5sec deficit on Westbrook and hit the front for good with 45 minutes left on the clock. The Porsche 919 Hybrid veteran had made his team-mates sweat, but ultimately delivered.

“It was good that Earl was on such fantastic form all weekend, to make up for his mistakes,” says Lynn. “To be honest, I always felt he’d make up for it because I know how talented and blisteringly fast he is as a team-mate, and I think for the first time he really showed me. Wow, he duly did make amends. Super-impressive.”

Typically of Sebring, which finished at midnight on Saturday, celebrations were… modest. “As I always find when you win in endurance racing you’re just so tired, emotionally and physically done, I just wanted to find my bed,” says Lynn. “I celebrated with my dad, brother and girlfriend with a McDonalds in the motorhome.” 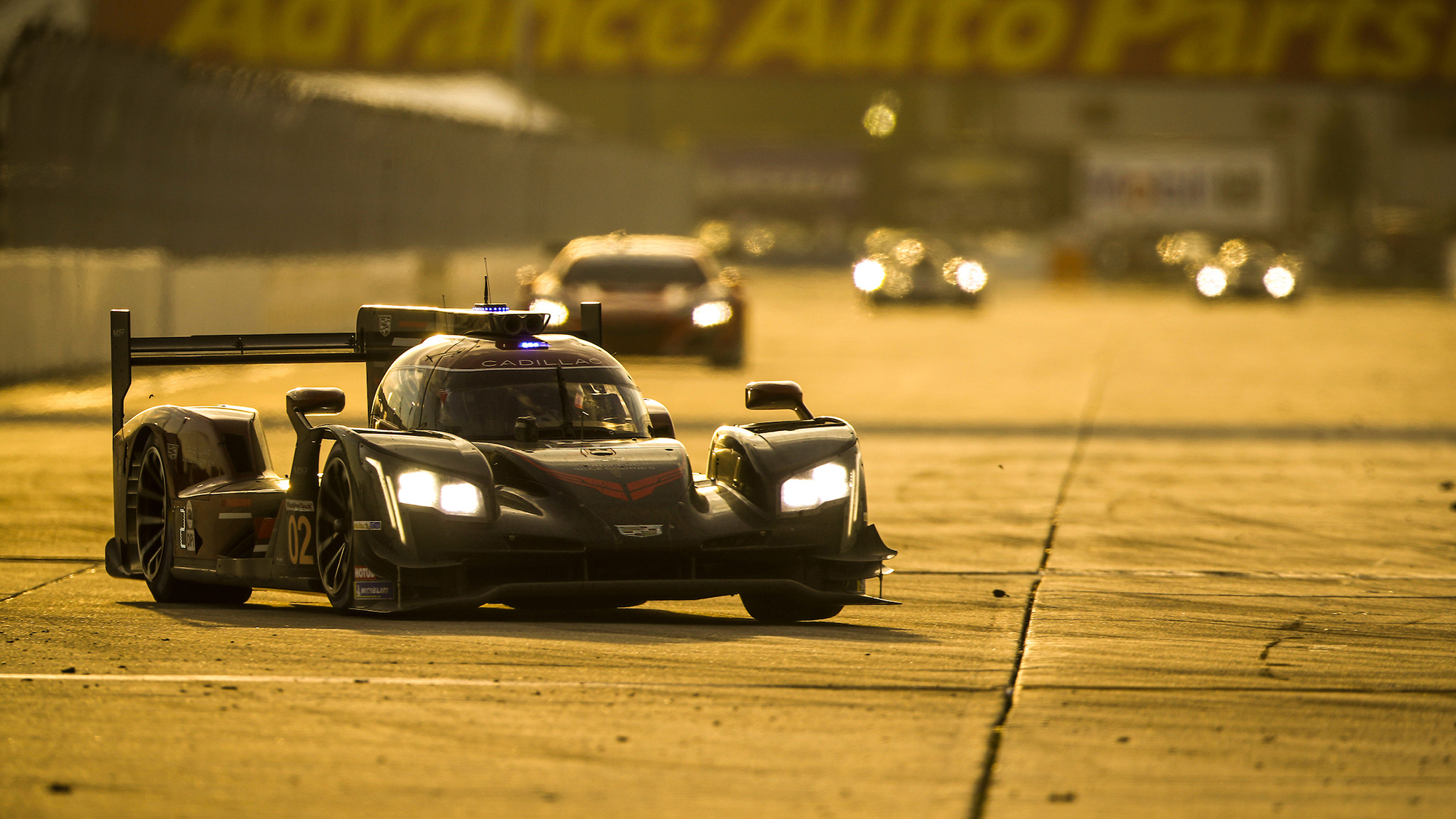 En route to the win… and a McDonald’s victory feast

A few days later he can reflect with satisfaction on a job well done – and a 100 per cent win record in the 12 Hours: two starts, two victories following his debut success shared with Jordan and Ricky Taylor when their father Wayne was running Cadillacs back in 2017. “I just keep on thinking what it means for everyone in the bigger picture,” he says. “It’s so nice to get a result and give everyone a lift and the confidence that we wanted going into the championship. Now it comes down to just me and Earl, no more long-distance races for a while, so we can focus on each other and I think that will be key.”

He also acknowledges this is a big win for Jani, who at 38 might well have boosted his chances of landing a return to sports car racing’s top tier as teams on both sides of the Atlantic gear up for the dual LMDh/Hypercar era. “Neel has already won pretty much everything in sports car racing, so where he goes next I’m not sure,” says Alex. “But where the landscape for sports car racing is he can really use this, and he’s a class act. It’s always the right time for a big win, but for him particularly this was really great timing.”

Lynn, 28, hasn’t joined Ganassi for a one-year fling. Now perhaps he’ll be lining up with or against Jani in an LMDh contender. “I’d be really happy to see that happen for him,” he says.

As for Magnussen, his new life in sports cars is on ice, but it’s hard to imagine he won’t be welcomed back to the long-form code with open arms when he’s done with F1. But when that will be after that sensational Bahrain performance is anyone’s guess.