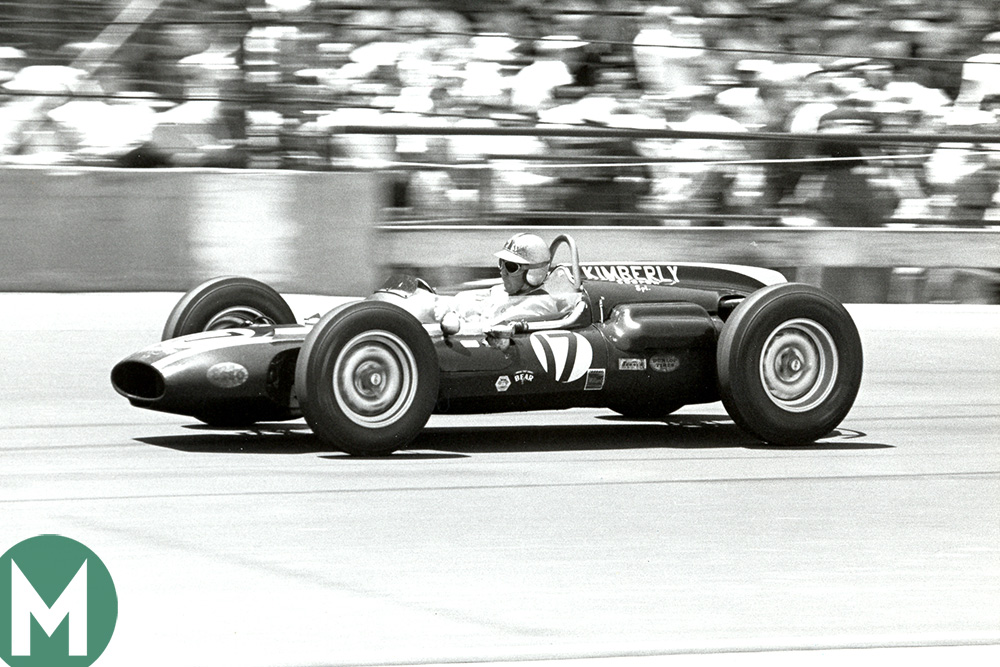 On auction during Monterey Car Week will be two different, but historically significant, Indianapolis 500 racers: the 1961 Cooper-Climax T54 and the 2012 Alexander Rossi-driven Dallara DW12 Honda IndyCar.

The rear-engined Cooper-Climax T54 was a pioneer. Until its appearance at the Brickyard, nearly every Indy 500 challenger since 1911 had the engine mounted in front of the driver.

John Cooper’s similarly mounted T51 impressed driver Rodger Ward at Sebring’s 1959 US Grand Prix, particularly due to its cornering capabilities. So, by 1960, Ward convinced his acquaintance to bring a rear-engined car to the Indianapolis Motor Speedway. To test it would be two-time Formula 1 champion Jack Brabham, and sponsor Jim Kimberly was successfully persuaded to fund the build of T54.

Within four months, the T54 was brought to the Brickyard and christened the ‘Kimberly Cooper Special’.

Brabham’s British invasion didn’t win over everybody, however, as Shaun Campbell writes in ‘Not in my Brickyard’.

‘When Jack Brabham brought a Cooper-Climax to the Brickyard in 1961, AJ Foyt, who won the 500 for the first time that year, said it looked like “a bunch of pipes lashed up with chicken wire,” adding, “I wouldn’t drive one of them no matter what.”’

So, 50 years after the first Indy 500 was held, Brabham was set to upset tradition. The 2.7-litre engine was down on power compared to the front-mounted Offenhausers of the Cooper’s competitors, but Brabham still managed to qualify 13th.

The Americans tore past on the straights and benefited from reduced tyre wear, but Brabham held on for ninth, even running as high as third. Within five years, rear-mounted engines became even more common; by 1969 they were the norm.

This one was driven again by Pedro Rodríguez at the 1963 Indy 500, with a works six-cylinder Aston Martin engine bolted in, but it failed to qualify. It reappeared in a sprint car race in 1977 and the car was later restored back to its ‘Kimberly Cooper’ specification.

Skip forward another half a century to the 100th running of the Indy 500. Hype surrounding the event was delivered in the inimitable American fashion, with Hulman George family (of IndyCar’s parent company) giving the call to start engines in unison, and AJ Foyt himself signalling the field to begin its rolling start.

Having missed out on a Formula 1 drive, Rossi was back in the States and the then 24-year-old was an unfamiliar face to Indy fans. With odds of 66-1 to win the race, he was a long shot.

James Hinchcliffe and Ryan Hunter-Reay were exchanging places at the front, joined by Townsend Bell, Josef Newgarden, Tony Kanaan, Carlos Munoz and Hélio Castroneves. “The result was entirely unpredictable for most of the distance,” wrote Gordon Kirby.

“But Hunter-Reay was the man to beat. He led 52 laps and was always at the sharp-end of the leading bunch until team-mate Townsend Bell messed up in the pits, crashing into Ryan and damaging both cars. Bell got away with less damage and lost only one lap but Hunter-Reay was two laps down when he resumed.

“At the end of the race Hunter-Reay showed his class as Andretti’s team leader by allowing Rossi to run in his draft and make it to the chequered flag. Ryan is a gentleman as well as a fierce racer, some of the spoiled brats in Formula 1 and MotoGP could learn a lot from him.”

A late restart had given Rossi, running ninth, his shot. He decided to forego a pitstop and emerged half a lap in the lead, and on the verge of picking up an Indy 500 win as a rookie.

“I have no idea how we pulled that off,” Rossi said in victory lane.

“We struggled a little bit on the pitstops but Bryan [Herta, crew chief] came up with an unbelievable strategy. I can’t believe we’ve done this. Ryan [Hunter-Reay] was unbelievable in helping me get to the finish. It’s an amazing result for Andretti Autosport. I’ll cherish the fact that at one point we were 33rd and we rolled the dice and came through and made it happen.

“We ran out of fuel in Turn 4 on the last lap. We were clutching it and coasting down the back straight. We knew it was going to be tight.”