A sixth title was almost inevitable halfway through the year, as Lewis Hamilton put together his best season to date to claim the 2019 Formula 1 Drivers’ Championship 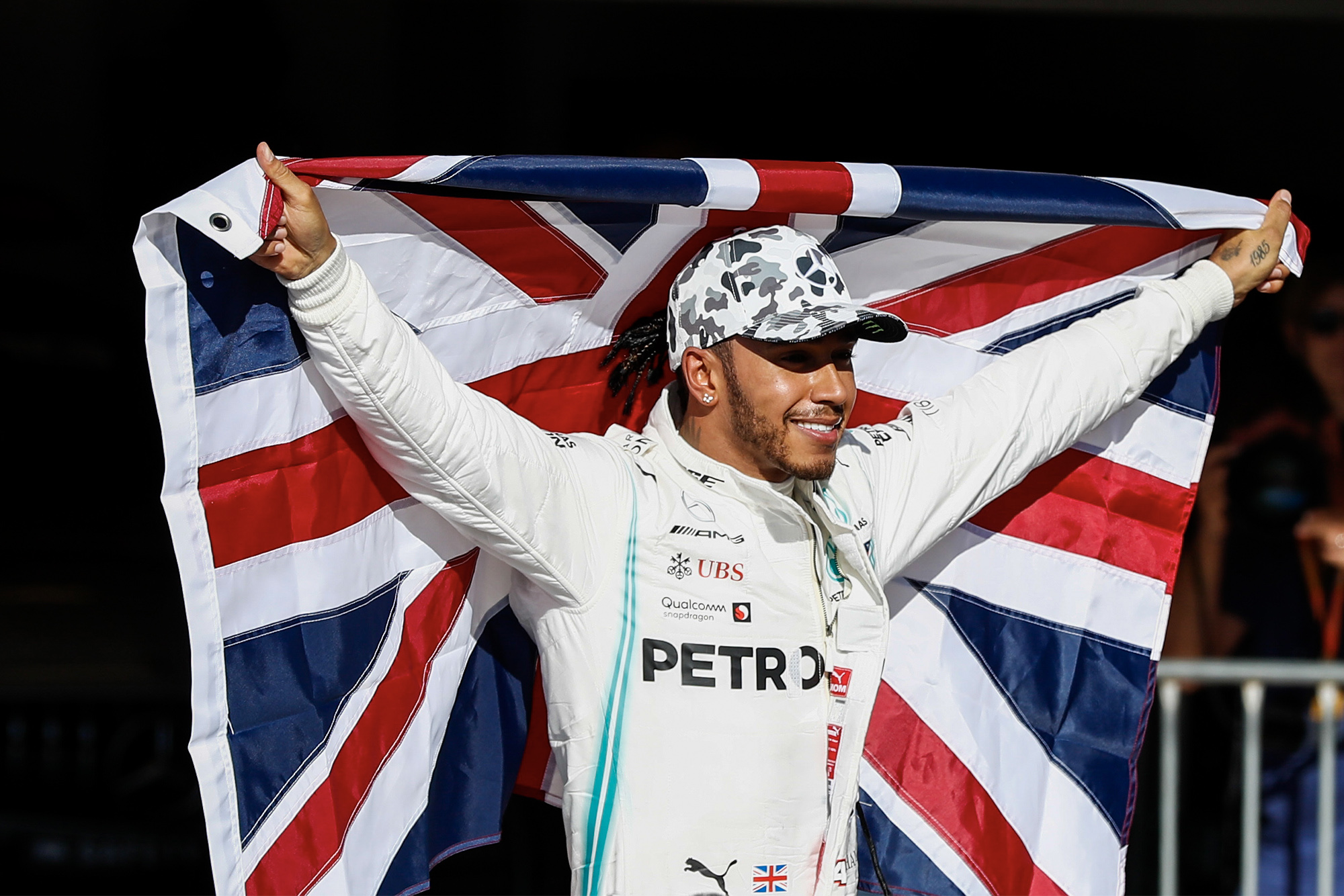 Lewis Hamilton’s 2019 season may have been his strongest ever. Seeing off the threat of his team-mate after a strong start to the year, and the resurgent Ferraris following the summer break, Hamilton quickly built a points advantage nobody could catch.

Barring a brief blip in Germany during treacherous conditions, his season has been unblemished, building his championship case early in the year, rather than his typical second half of the season storm.

He took 10 victories on his way to clinching the title, demonstrating his vast repertoire of racing technique, as he varied his approach to suit the circumstances.

Hamilton put up a gritty defence from Max Verstappen in Monaco; managed his tyres impeccably at Silverstone and Mexico; and made a storming comeback in Hungary to deny Verstappen once more. We’ve not seen a more complete season from him before.

His Formula 1 record now stands at 83 race victories and six world championship titles, as he closes in quickly on the high-water mark left by Michael Schumacher, which many thought unreachable.

With his ability seeming to grow from strength to strength with each passing season, the question is just how far can Hamilton go?

But this is the story of how he took his sixth Formula 1 World Championship: the 2019 season, race by race. 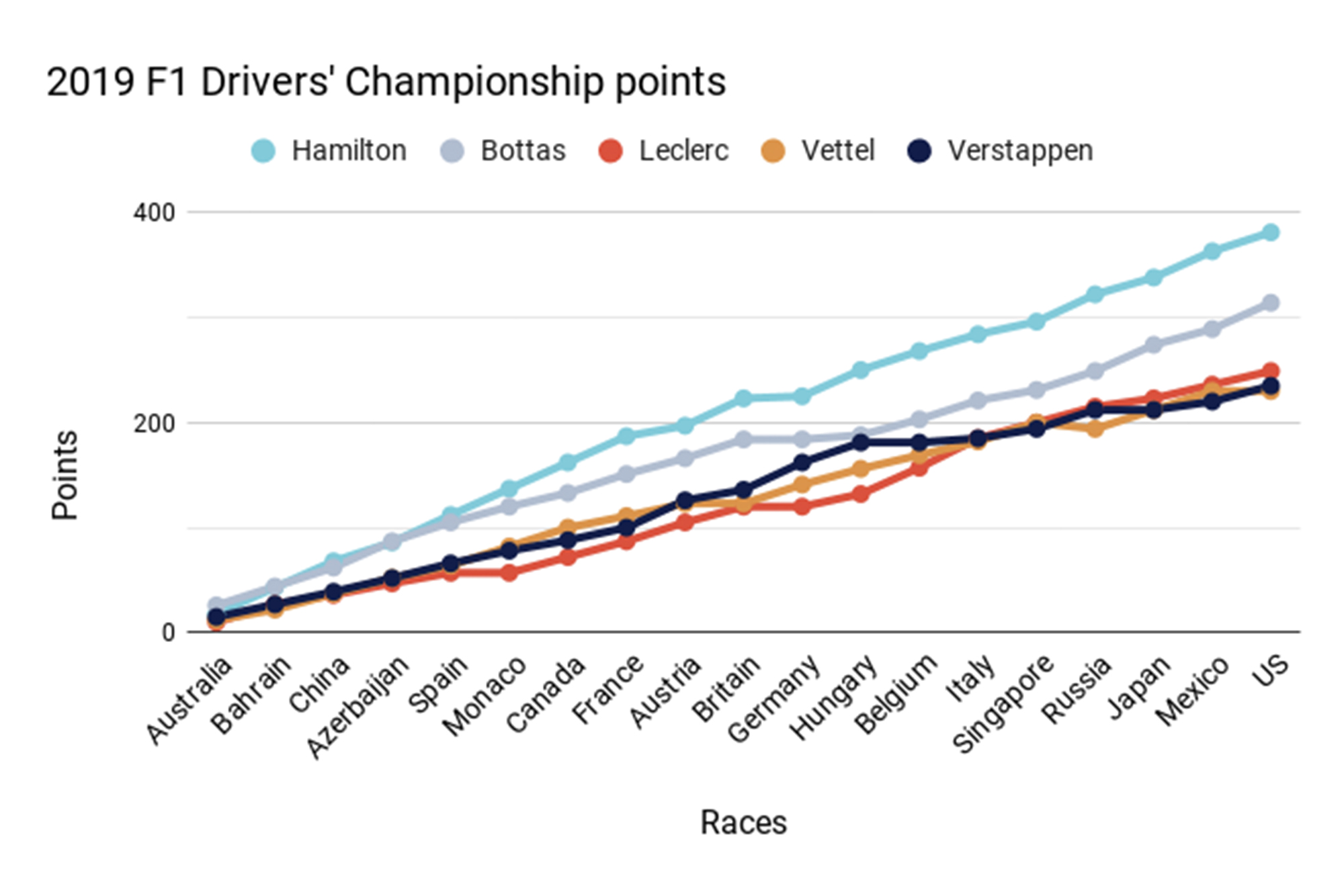 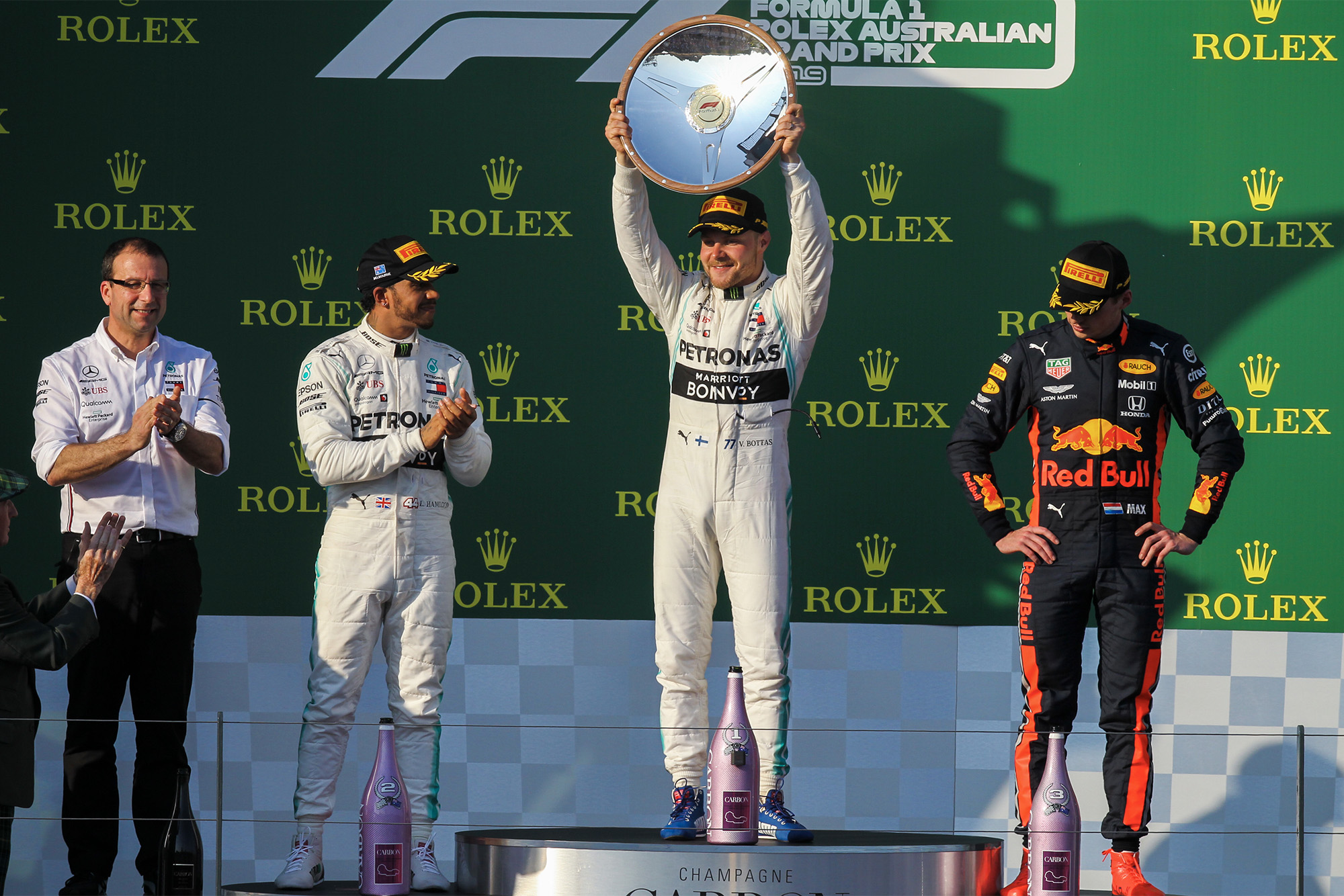 Bottas took the opening race in Australia by some margin Photo: Motorsport Images

Hamilton’s title defence begins with a dominant win by Valtteri Bottas, who finished 20 seconds ahead of his team-mate. Hamilton had sustained floor damage, but the margin of victory appeared to herald a new Mercedes intra-team battle for the title between Hamilton and ‘Bottas 2.0’. 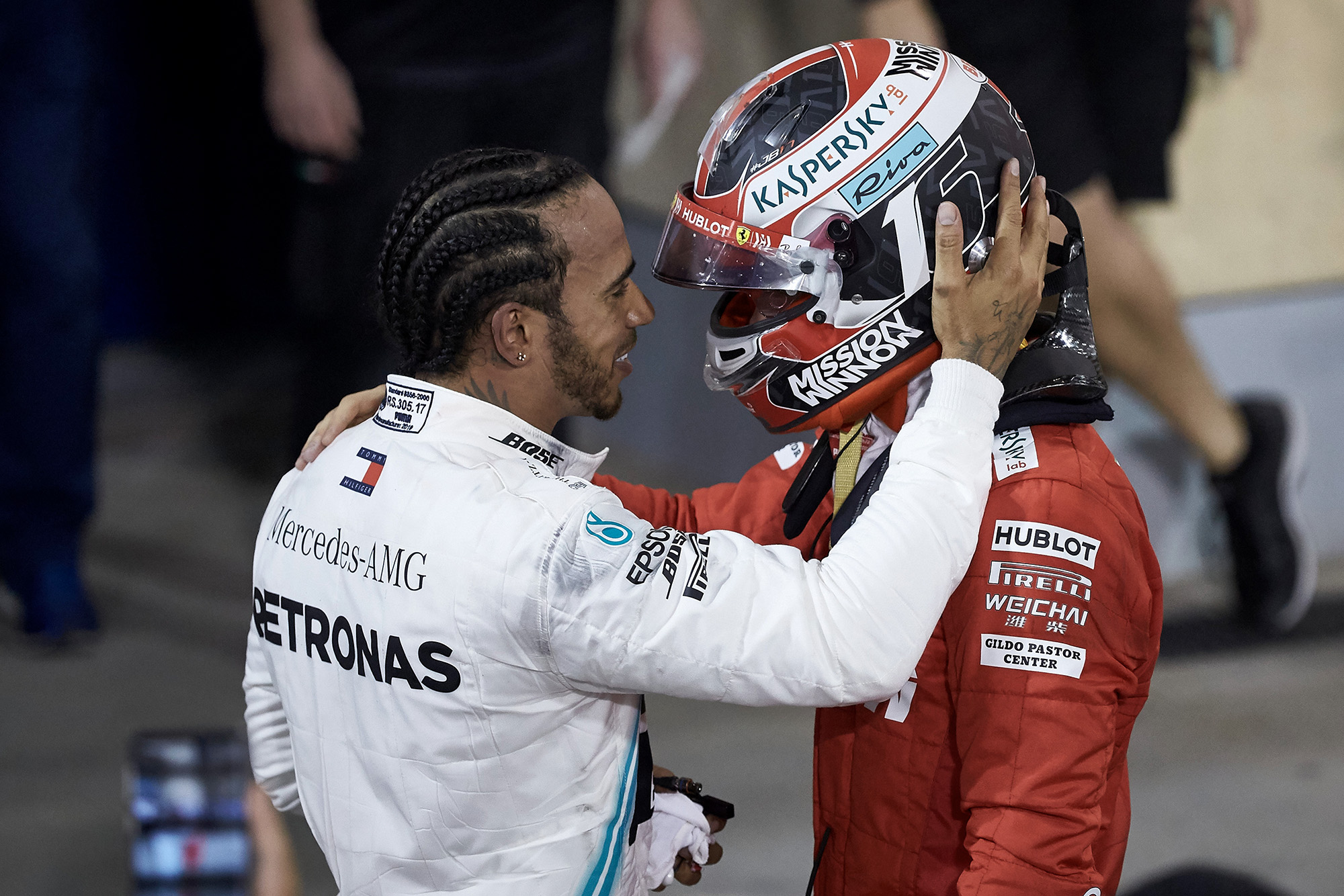 Lewis Hamilton was there to pick up the spoils in the desert when an on-form Charles Leclerc and Ferrari looked certain to win, only for engine issues to rob the Monégasque of power and the lead.

Sebastian Vettel was nowhere near the podium after Hamilton pressured him into a spin, and the vibrations from his flat-spotted tyres detached his front wing. 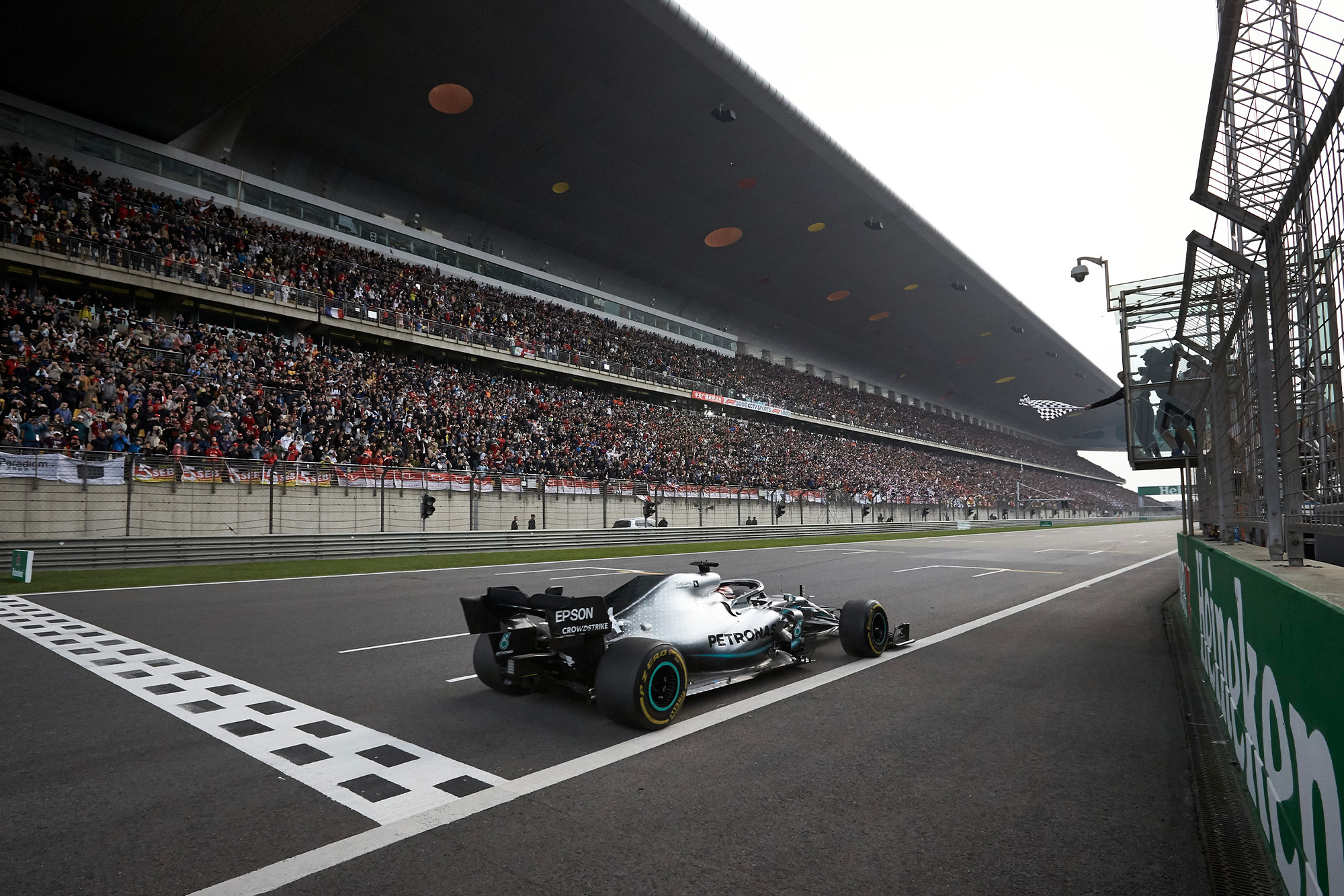 Hamilton took a straight-forward victory at Formula 1’s 1000th race, leading home a third-straight Mercedes one-two. Hamilton took the lead of the championship for the first time from his team-mate. 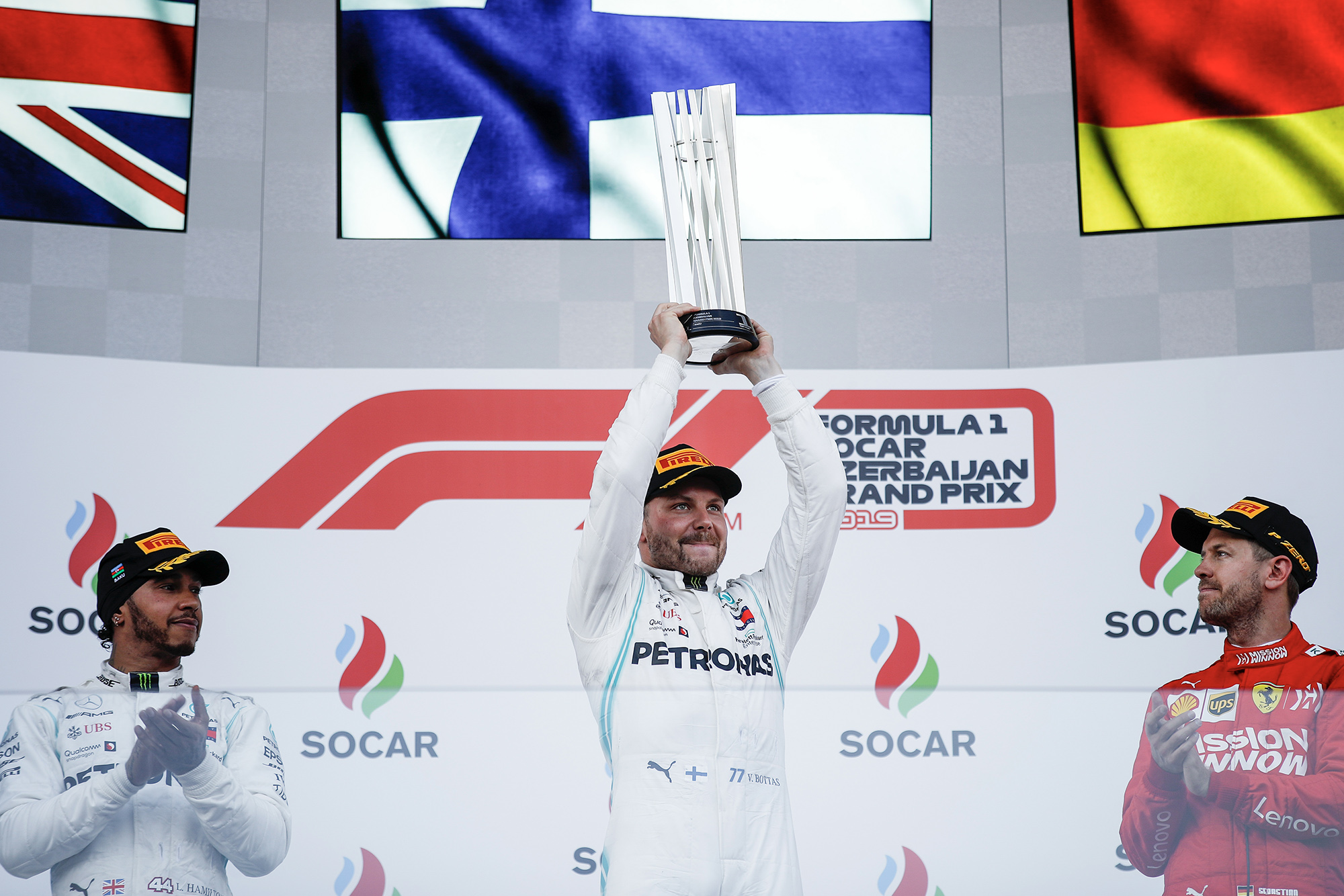 Bottas finally gets his win in Baku Photo: Motorsport Images

A penultimate lap puncture had robbed Bottas of a win in Baku in 2018, but there was no misfortune for him this year, as he took the lead after a brief duel with Hamilton at the start, and crossed the line first, ahead of his team-mate. Behind him, Ferrari rued a missed chance of victory; Leclerc demonstrated race-winning pace, but had ruined his race with a qualifying crash. 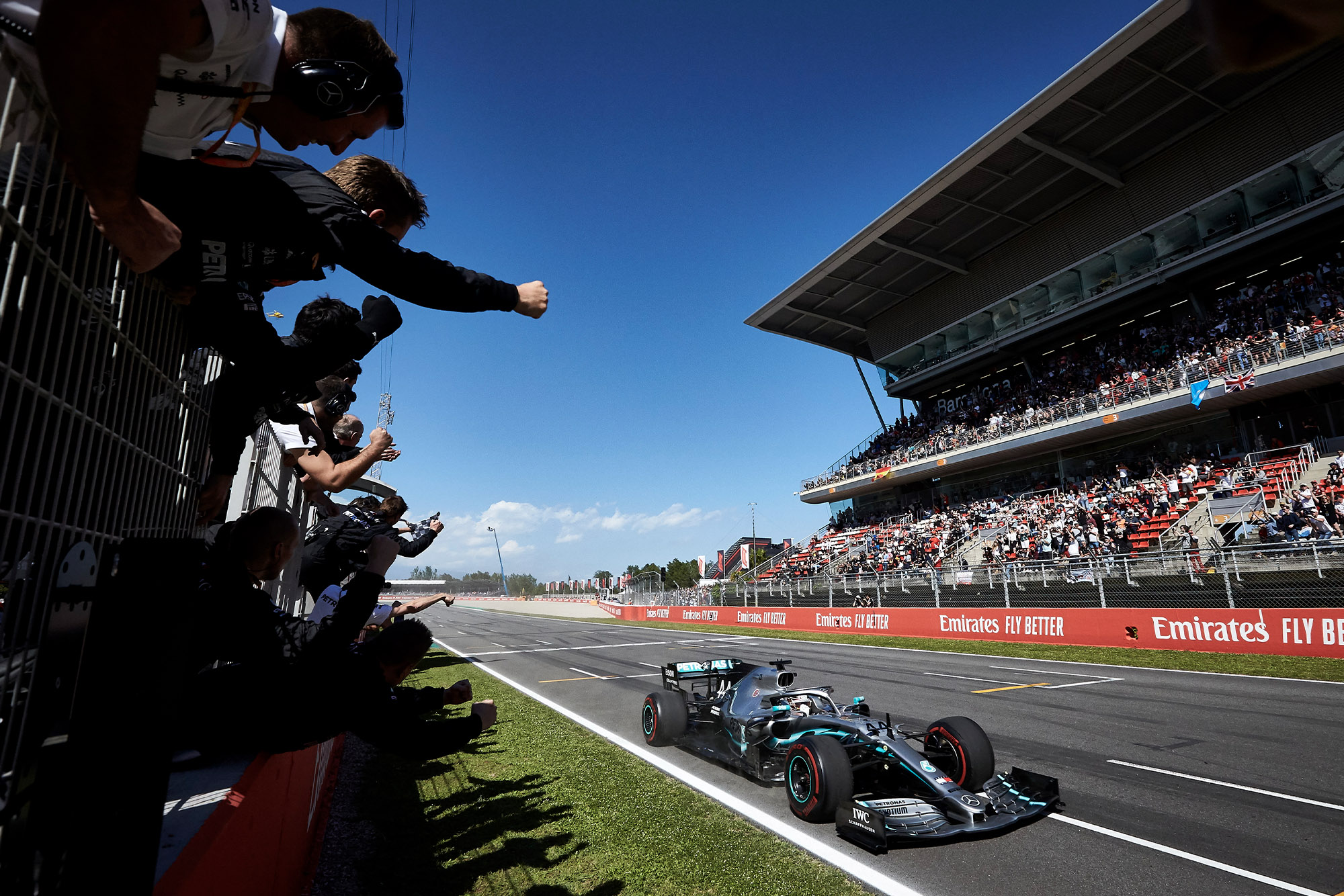 Mercedes dominated the competition at the venue Ferrari had looked comfortably fastest at in testing. A fifth one-two finish in a row for the Silver Arrows, with Hamilton taking the win, and the streak looked like it would continue for a long while yet. Hamilton reassumed the lead of the title race and would not lose it for the rest of the year. 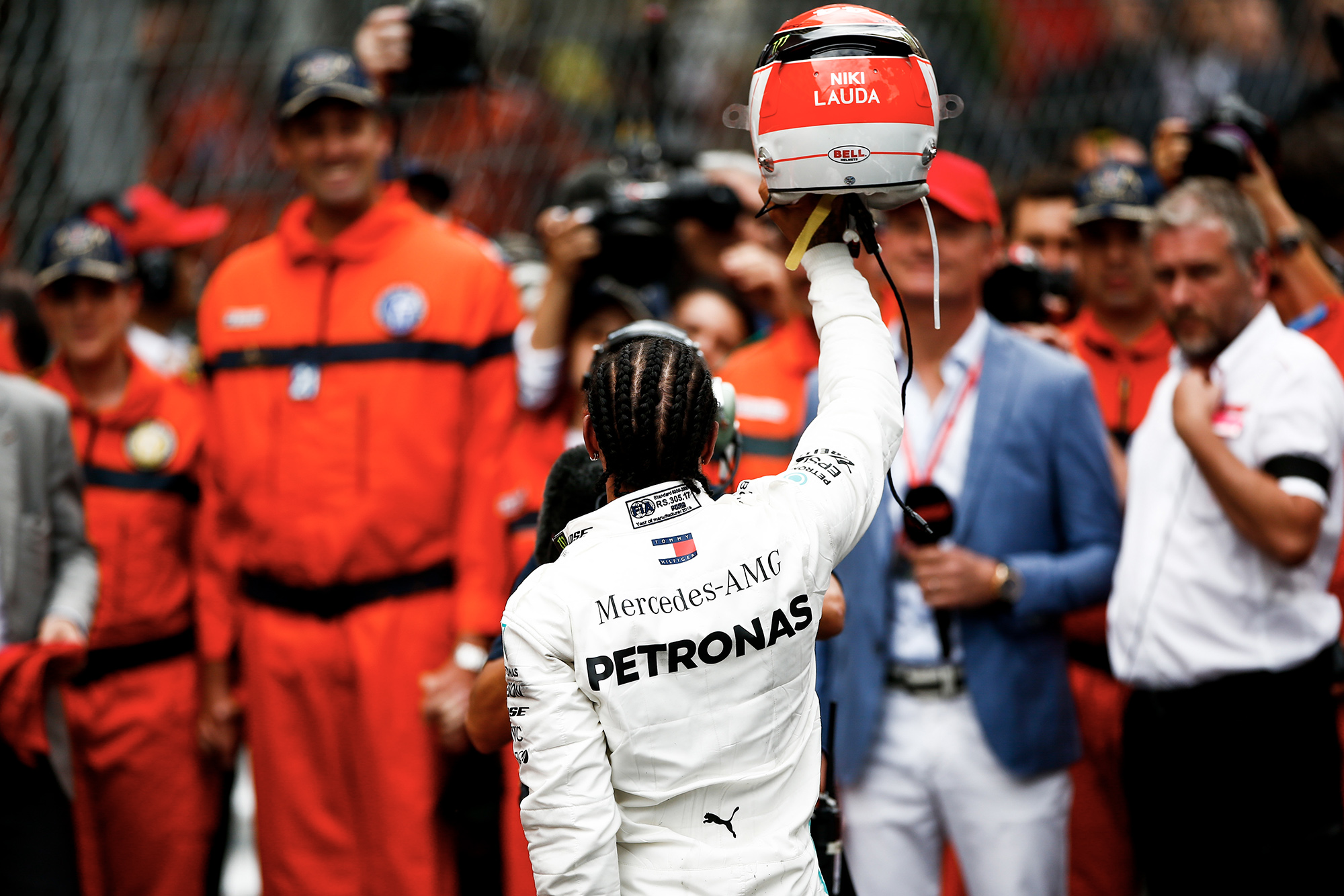 A Monaco Grand Prix victory Niki Lauda would have been proud of Photo: Motorsport Images

Verstappen hounded Hamilton for the final third of the race on fresher tyres but was unable to muscle his way past the Mercedes on the tight Monaco streets for victory. Hamilton dedicated his win to Niki Lauda, who had passed away in the week before the race. 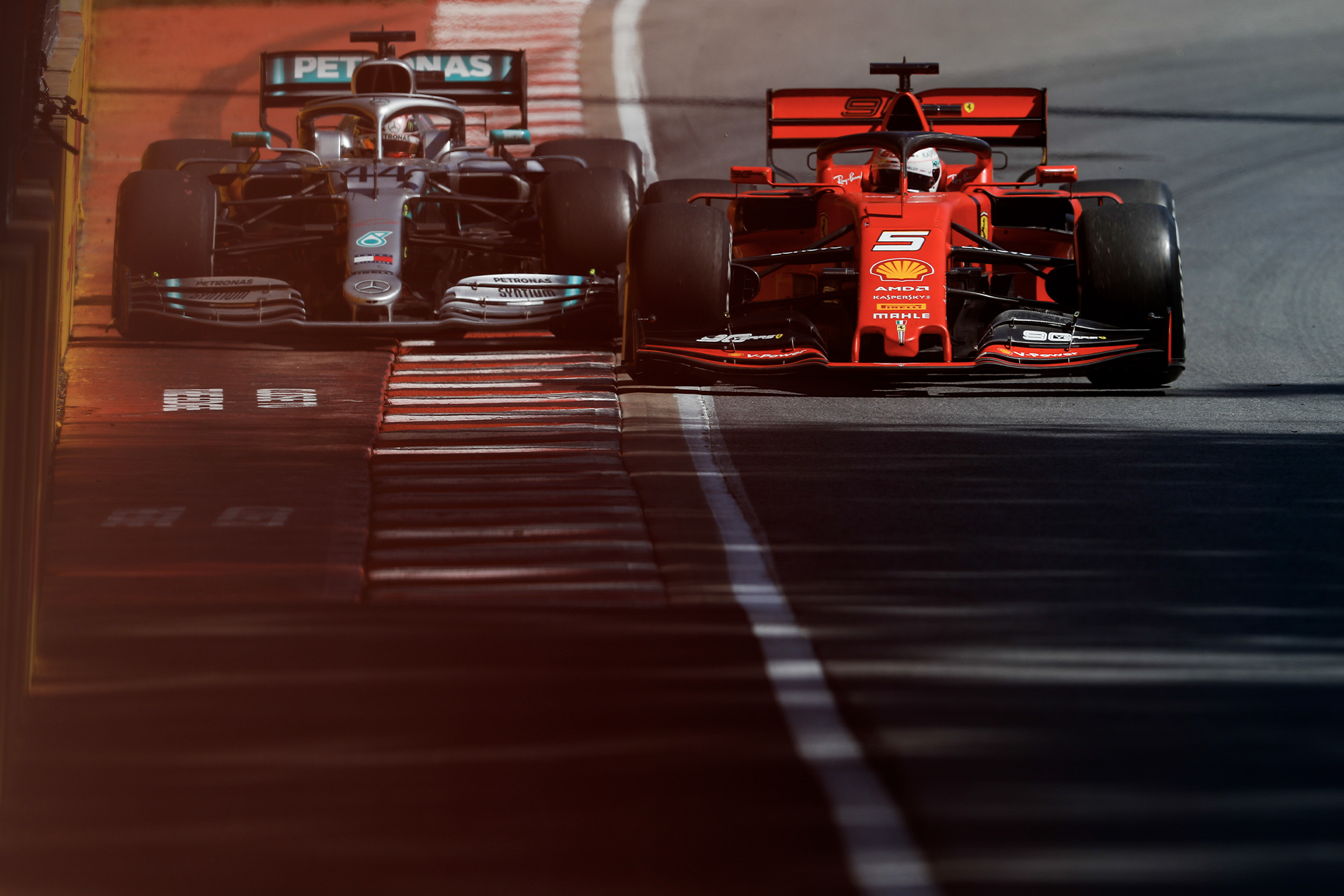 Controversy reigned in Canada as Hamilton inherited victory after Sebastian Vettel received a five-second penalty for rejoining the track in an unsafe manner. Hamilton had been harrying the Ferrari driver for the lead, and a small mistake from Vettel had his SF90 running across the grass at Turn Three, squeezing Hamilton against the wall on re-entry. He was judged to have forced the Mercedes driver to take avoiding action and received a 5-second time penalty, handing the win to Hamilton. 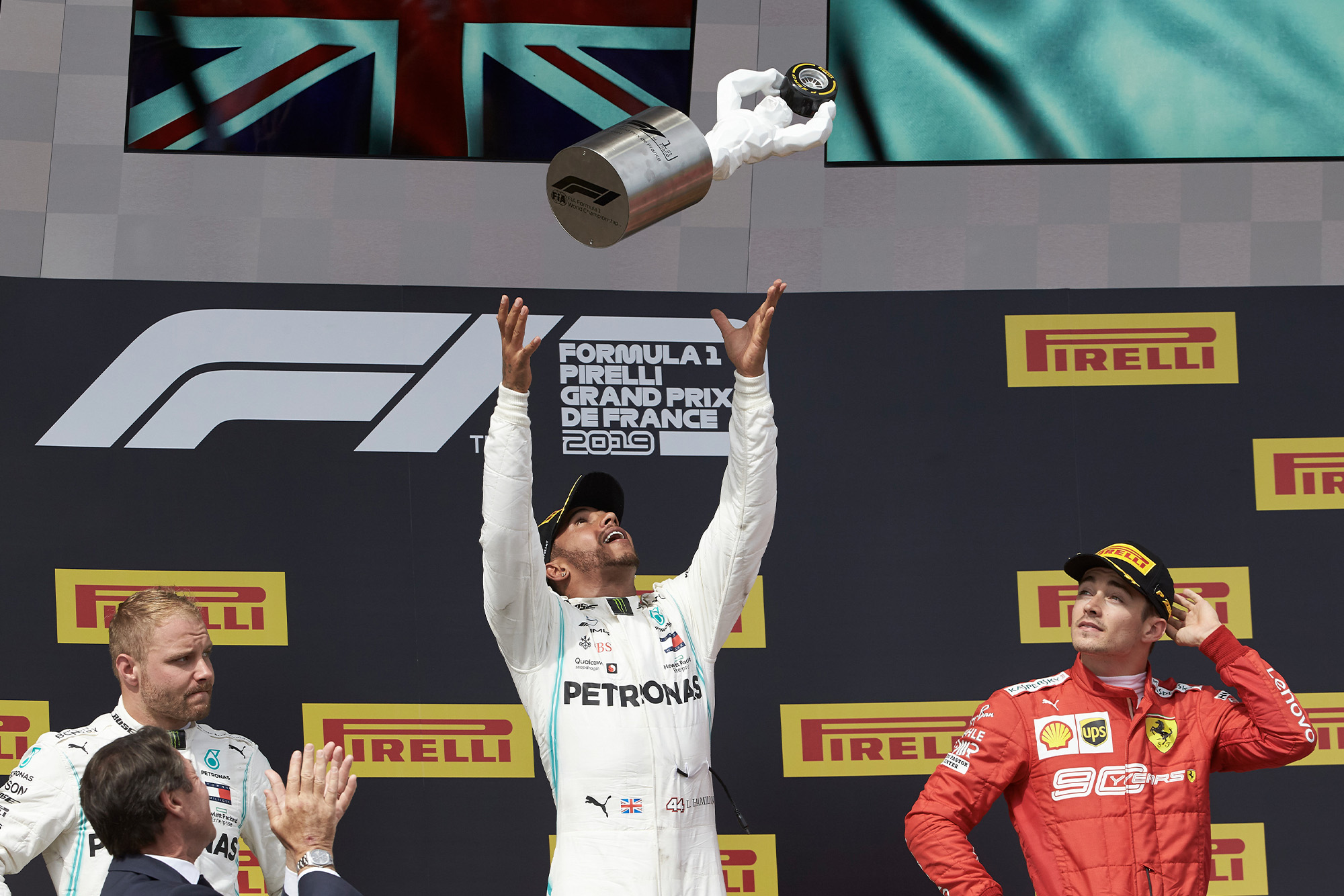 Hamilton dominated the Paul Ricard race, taking pole, leading from start to finish and winning from Bottas by a comfortable 18sec margin. 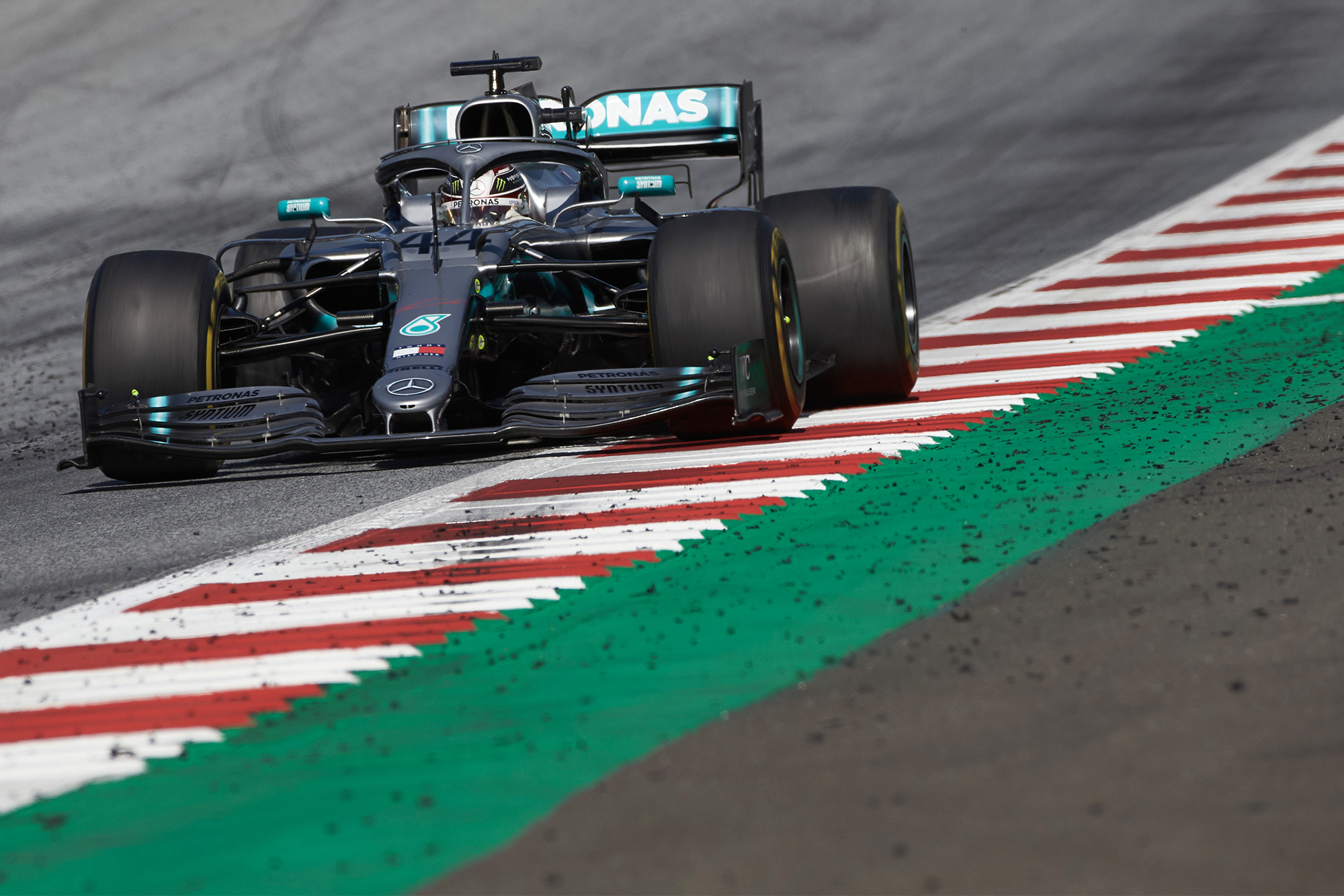 The summer heat was not to the W10’s liking in Austria Photo: Motorsport Images

The first sign of weakness from Mercedes as it was put under pressure early on by the faster Red Bulls and Ferraris. In the summer heat in Spielberg, the W10 was no longer the class of the field and Hamilton would have to settle for fifth as Verstappen took his first win of the season. 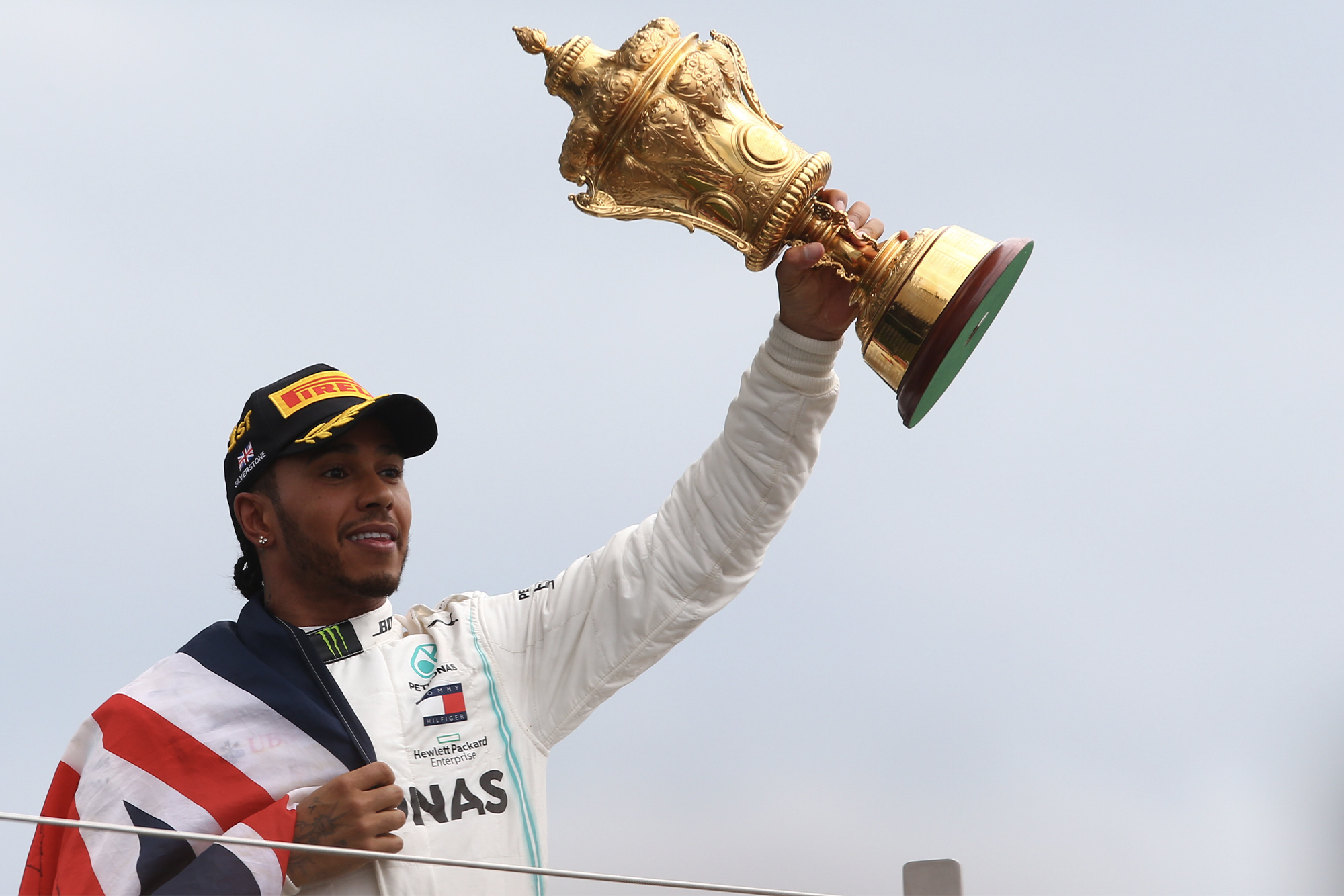 A strategy call made in the car won Hamilton his home race ahead of Bottas Photo: Motorsport Images

With a strategy his own team though impossible, Hamilton nursed his tyres to the end on a one-stop to take full advantage of a virtual safety car for the stranded Alfa Romeo of Antonio Giovinazzi. Bottas was unfortunate to lose out on the lead in the process and couldn’t catch his team-mate before the end. As the Mercedes’ began to pull a gap to the rest, Verstappen and Vettel lost further ground as the Ferrari driver crashed into the Dutchman. 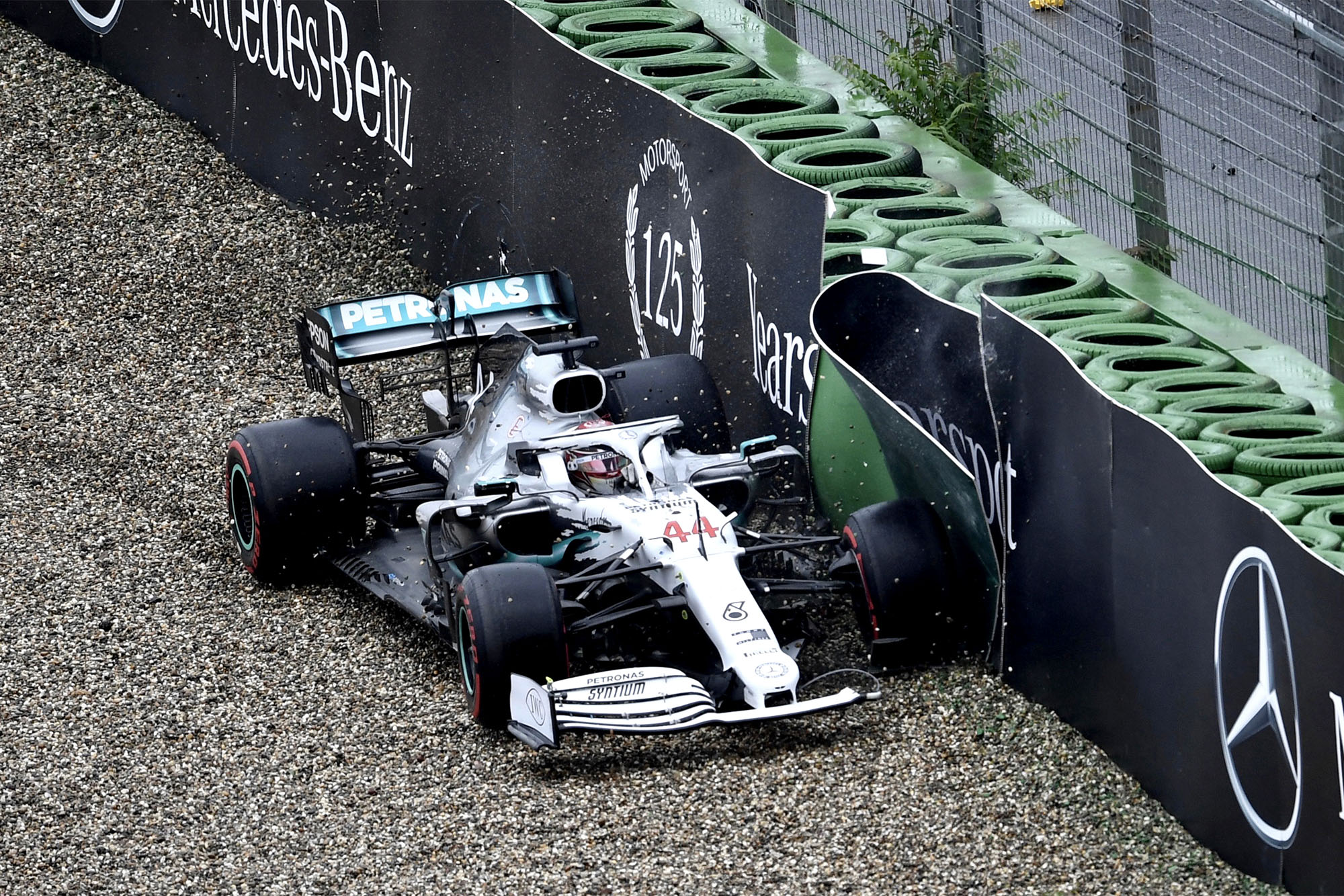 Mercedes celebrated 125 years in motor sport at its home race, but it will not be looked back on fondly by the team. Hamilton controlled the early stages of the race but as rain intensified, tyre choice became critical and under a virtual safety car and on cold soft tyres, Hamilton slid off the circuit and into the barriers. The team’s race unravelled further from there as Hamilton was hit with a penalty for his entrance to the pits and Bottas crashed out in his attempts to catch the leading Verstappen. Hamilton was promoted to ninth after the race as both Alfa Romeos were disqualified post-race, somehow extending his championship lead in his worst race of the season. 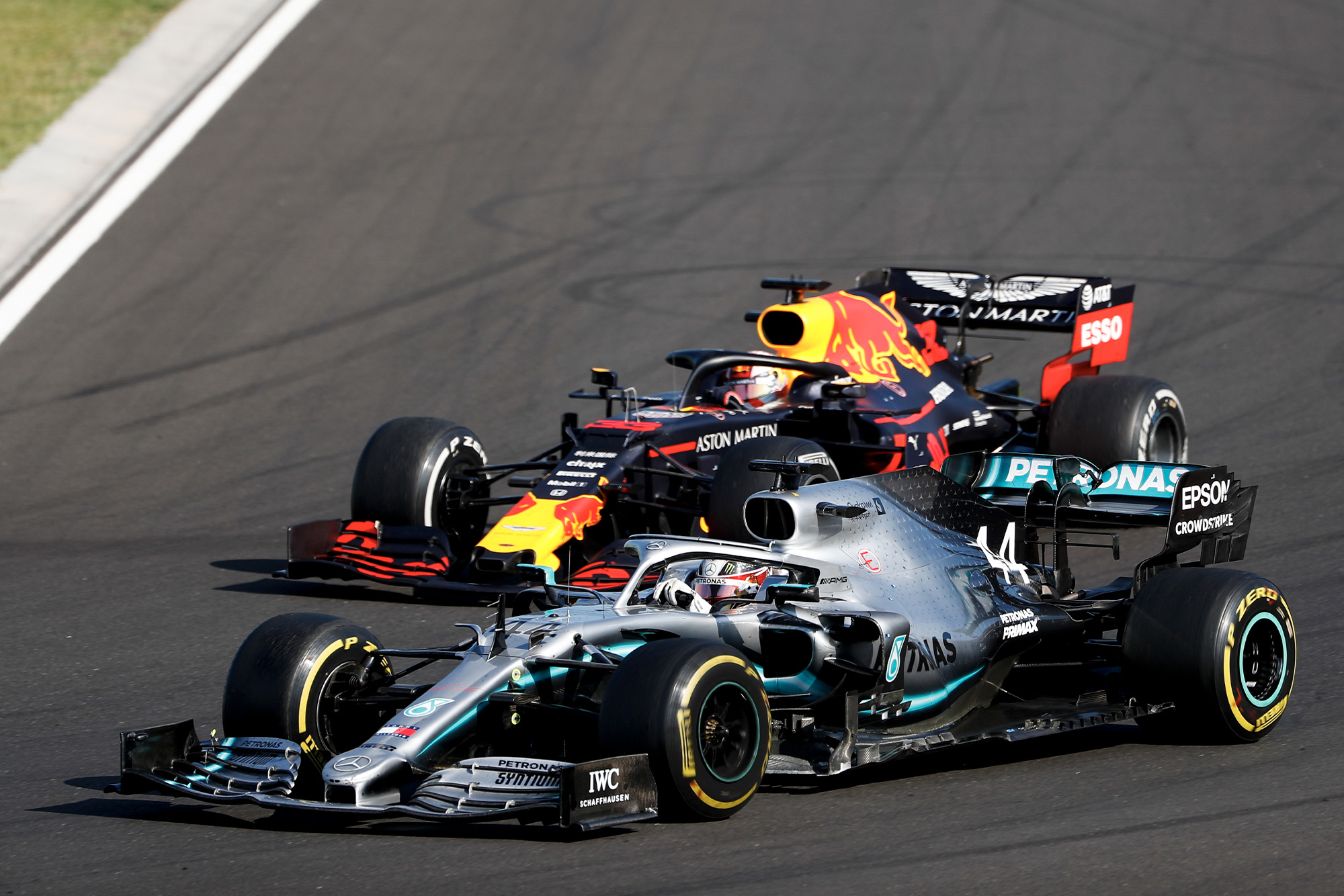 In a race that will be looked back on as a modern classic, Verstappen and Hamilton went head-to-head for victory, with the Red Bull driver pressured from beginning to end. In a masterstroke on strategy, Hamilton was brought in for a second pit stop and quickly closed up a 20+second gap to carve past the Dutch driver for the victory with just a handful of laps to go. Bottas suffered another race to forget with an eighth-place finish, losing further ground in the championship. 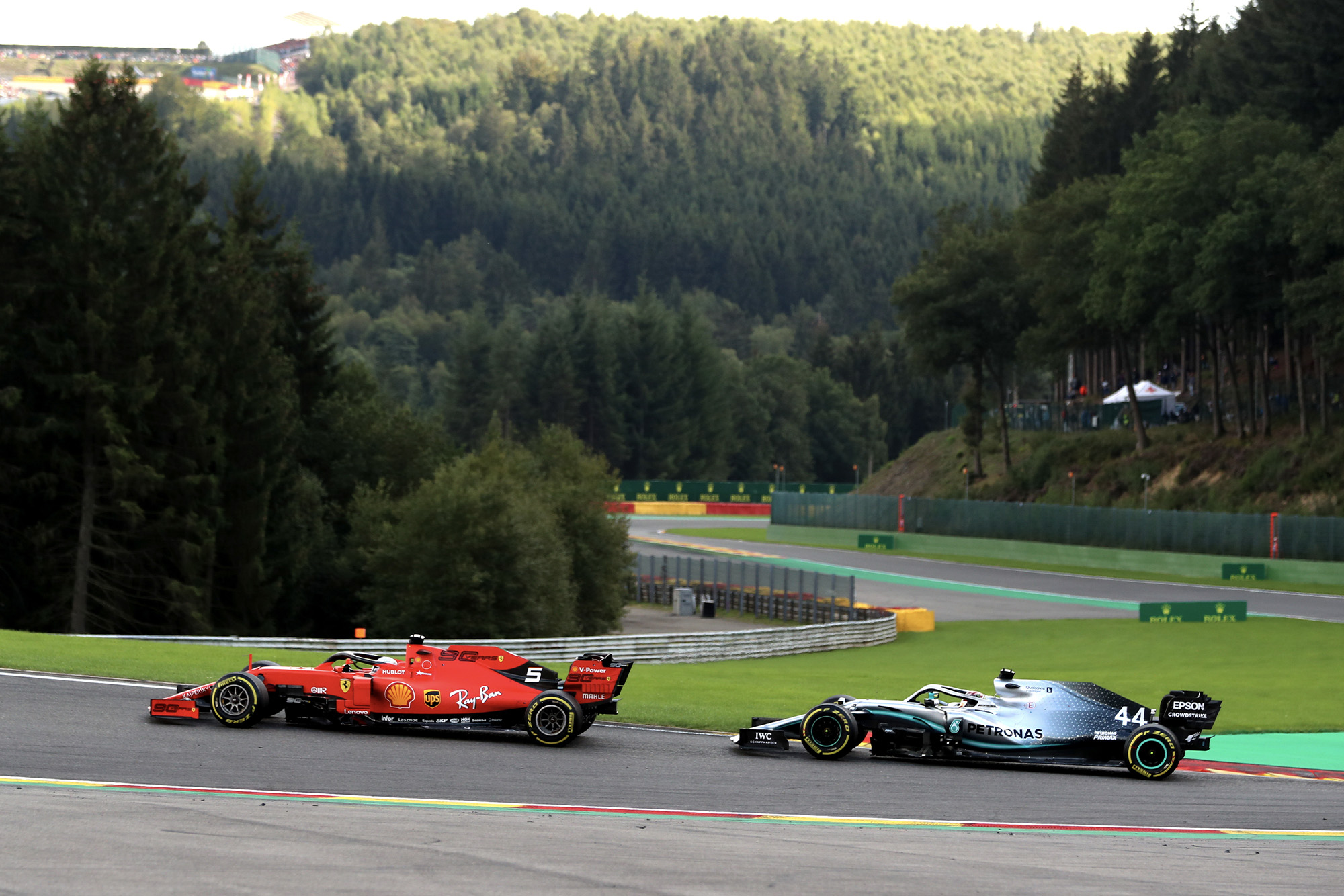 A turning point in the season that came too late for Ferrari, the Prancing Horse returned from the summer break with searing pace and Charles Leclerc took his first F1 victory as Mercedes was beaten on pace rather than misfortune. Hamilton hounded the Ferrari driver to the end, but a vital period stuck behind Vettel after his pit stop cost him a chance of victory. 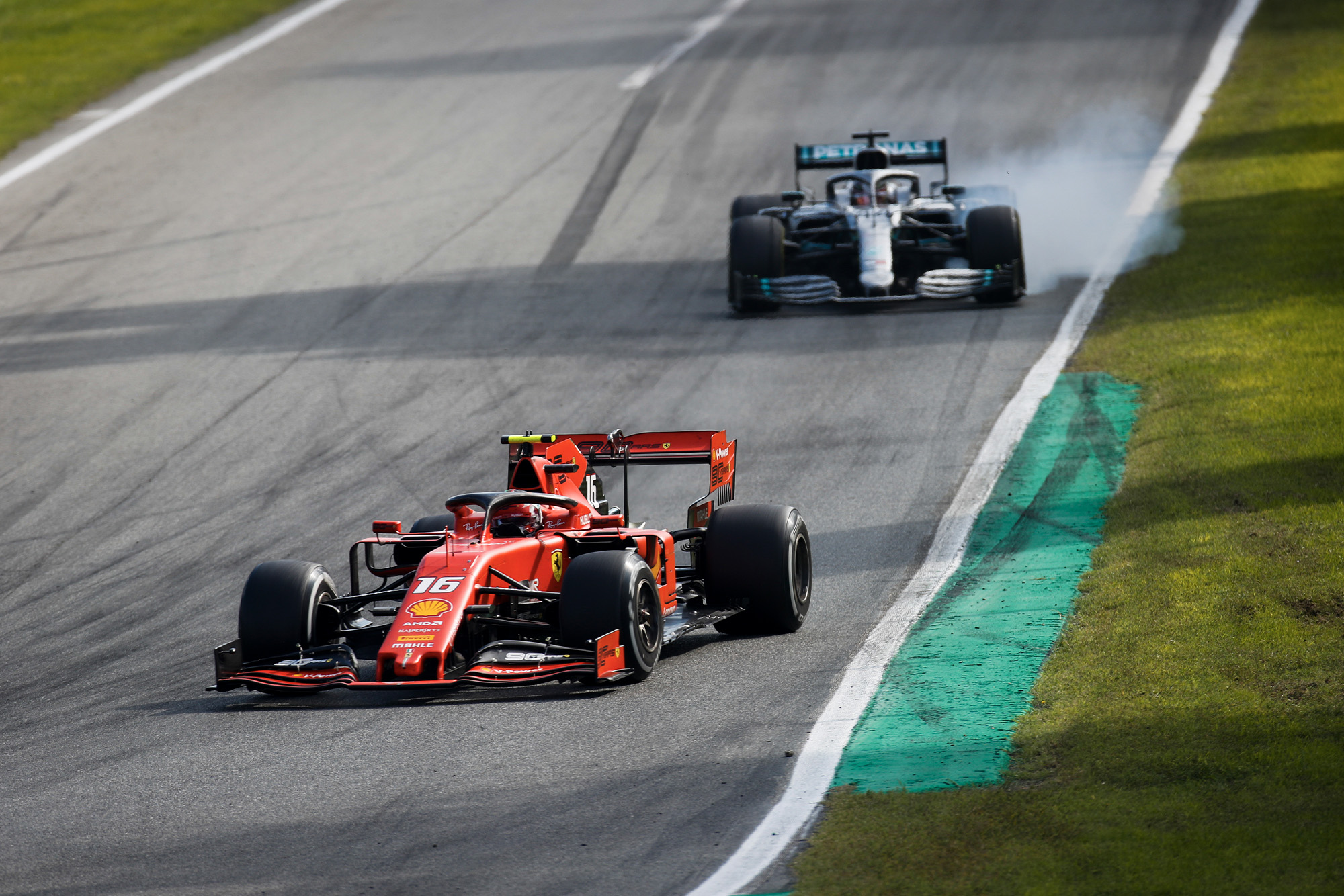 Leclerc made it back-to-back wins despite intense pressure from Hamilton Photo: Motorsport Images

Leclerc thrilled the Tifosi with a masterful drive under pressure from both Mercedes chasing him down to win at Monza. Hamilton made a rare mistake, locking his brakes into Turn One in pursuit of the Monégasque driver, and Bottas was able to take second from him. 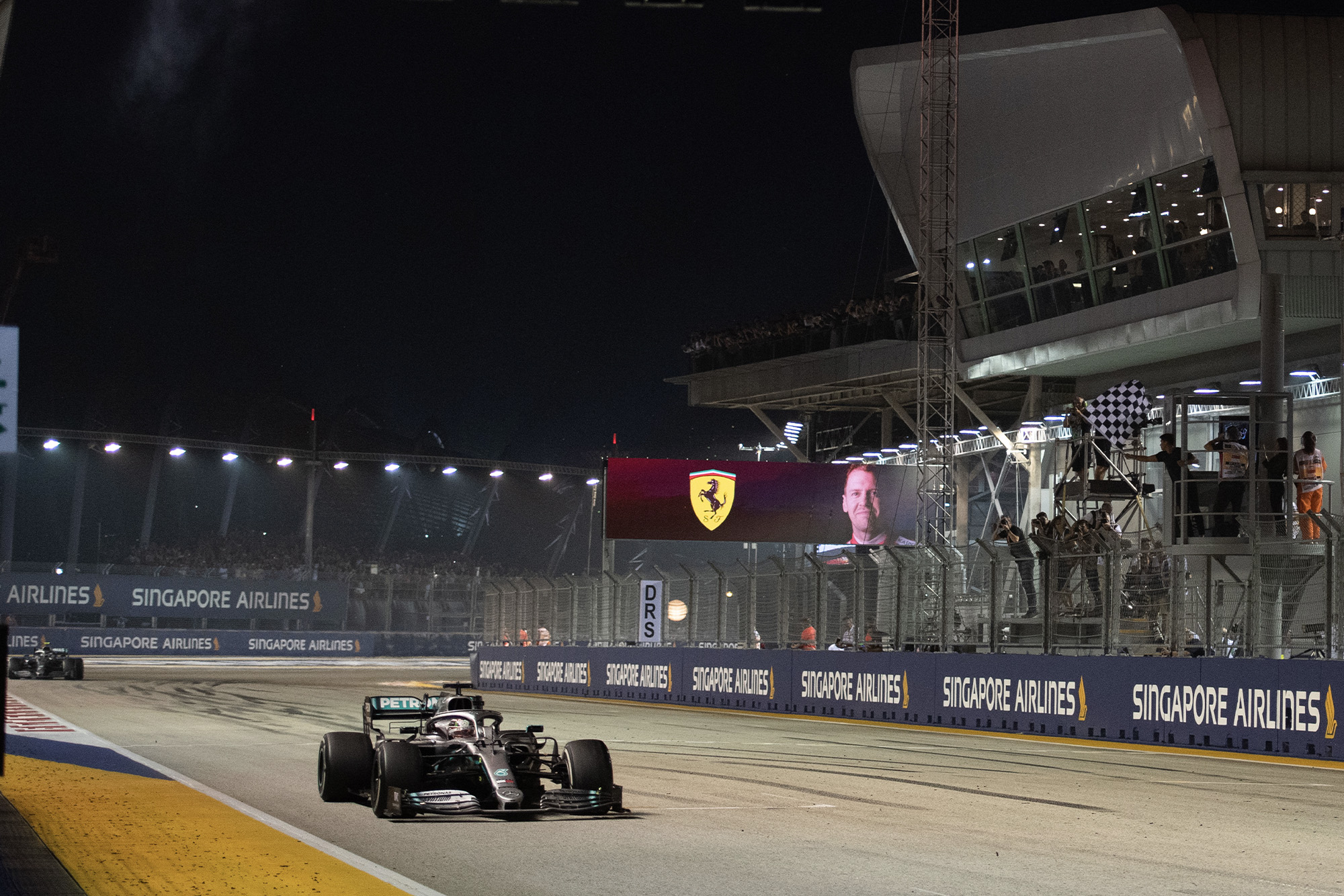 Vettel and Ferrari won on the Marina Bay streets as the four-time champion was lucky with strategy. Leclerc lost out in an accidental undercut from his own team-mate; Mercedes was forced to settle for fourth and fifth, too far off of the leading pace to seriously challenge for a win. Mercedes reinforced the view of Bottas as Hamilton’s “wingman” when the team requested that he slow down as to prevent Alexander Albon from leapfrogging Hamilton in the pit stops. 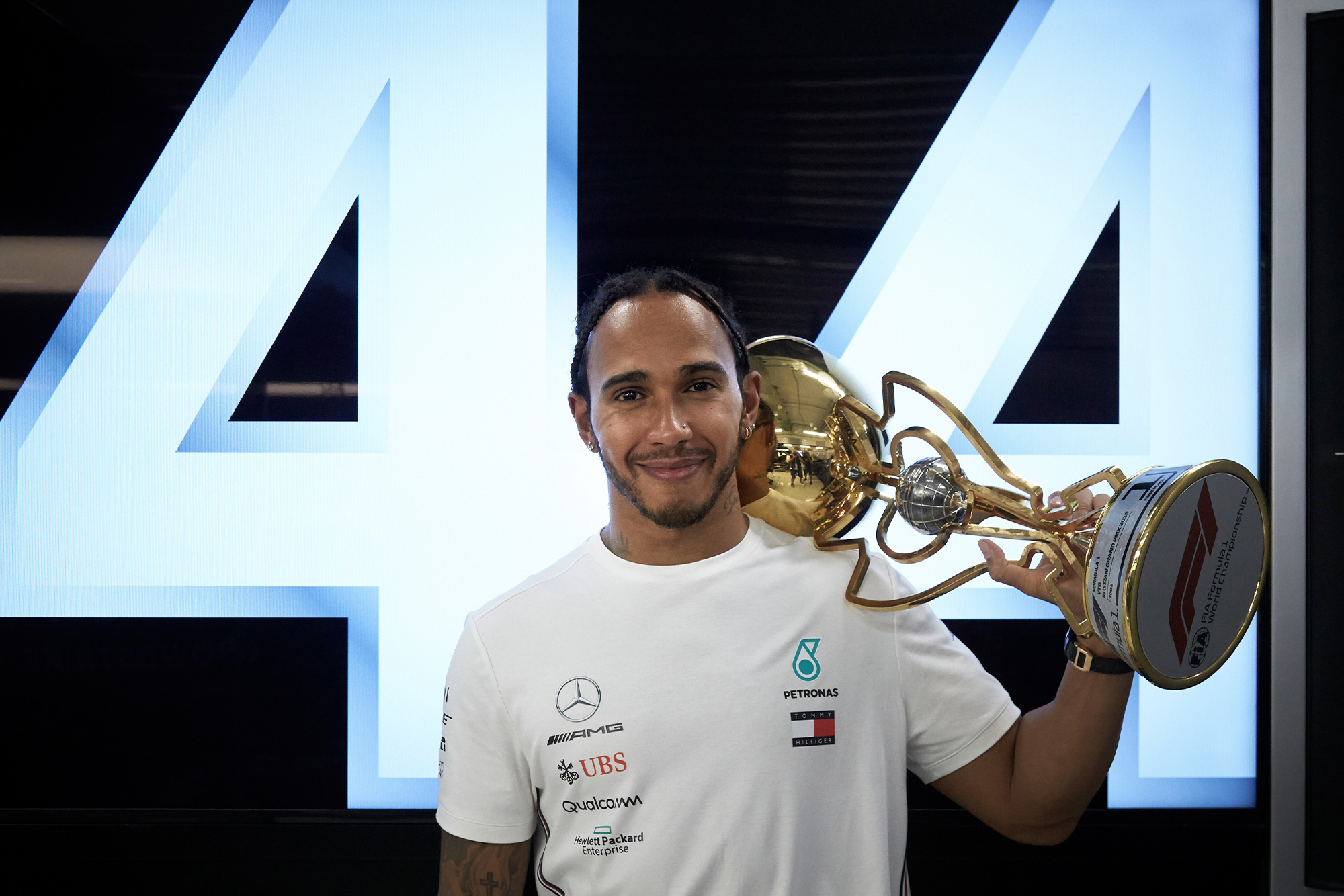 Hamilton was there again to capitalise on Ferrari misfortune Photo: Motorsport Images

Ferrari’s front-row lock-out and one-two at the start quickly turned into a nightmare of the team’s own making. A team-orders row ensued while Vettel led from Leclerc but Hamilton stuck close enough to the Ferraris to be an undercut threat. During the pit-stop phase, Vettel was forced out of the race with reliability issues and under a VSC, Hamilton was able to pit and come out ahead of Leclerc for the lead and eventual win. 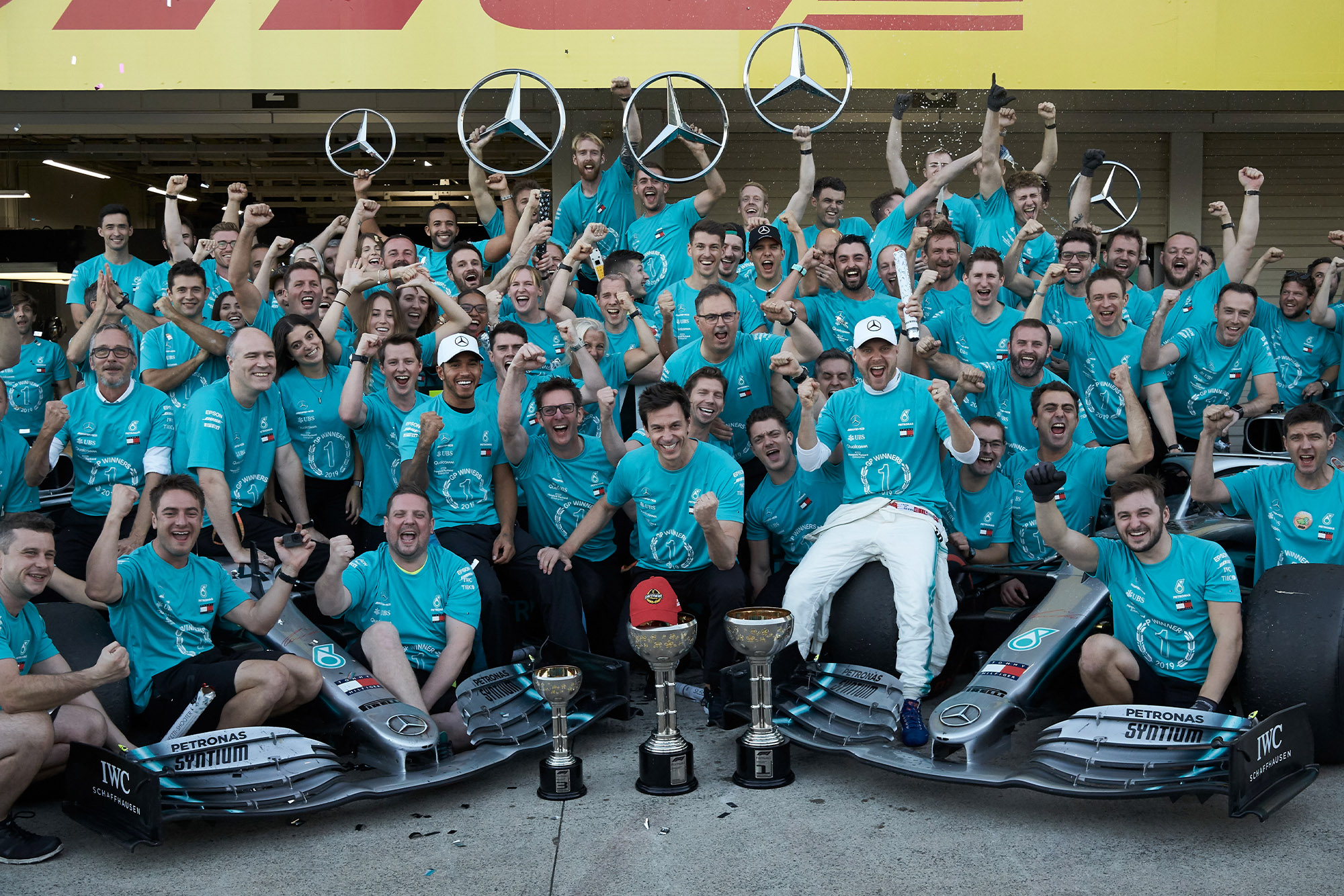 Bottas scored his first race win since Azerbaijan as Ferrari suffered from mistakes once again. The team was in a perfect position with a 1-2 in qualifying but threw away the advantage within seconds of the start.

Vettel moved before the lights went out but stopped in time to avoid a jump start penalty. It meant that he was slow to start the race — as was team-mate Leclerc — opening the door for Bottas to take the lead from third. Leclerc then collided with Max Verstappen, damaging his front wing, and sending debris flying. Hamilton miraculously avoided injury as a piece of carbon fibre came loose and struck his W10, approaching 130R. Despite fresher tyres late on in the race, Hamilton couldn’t overtake Vettel for second. 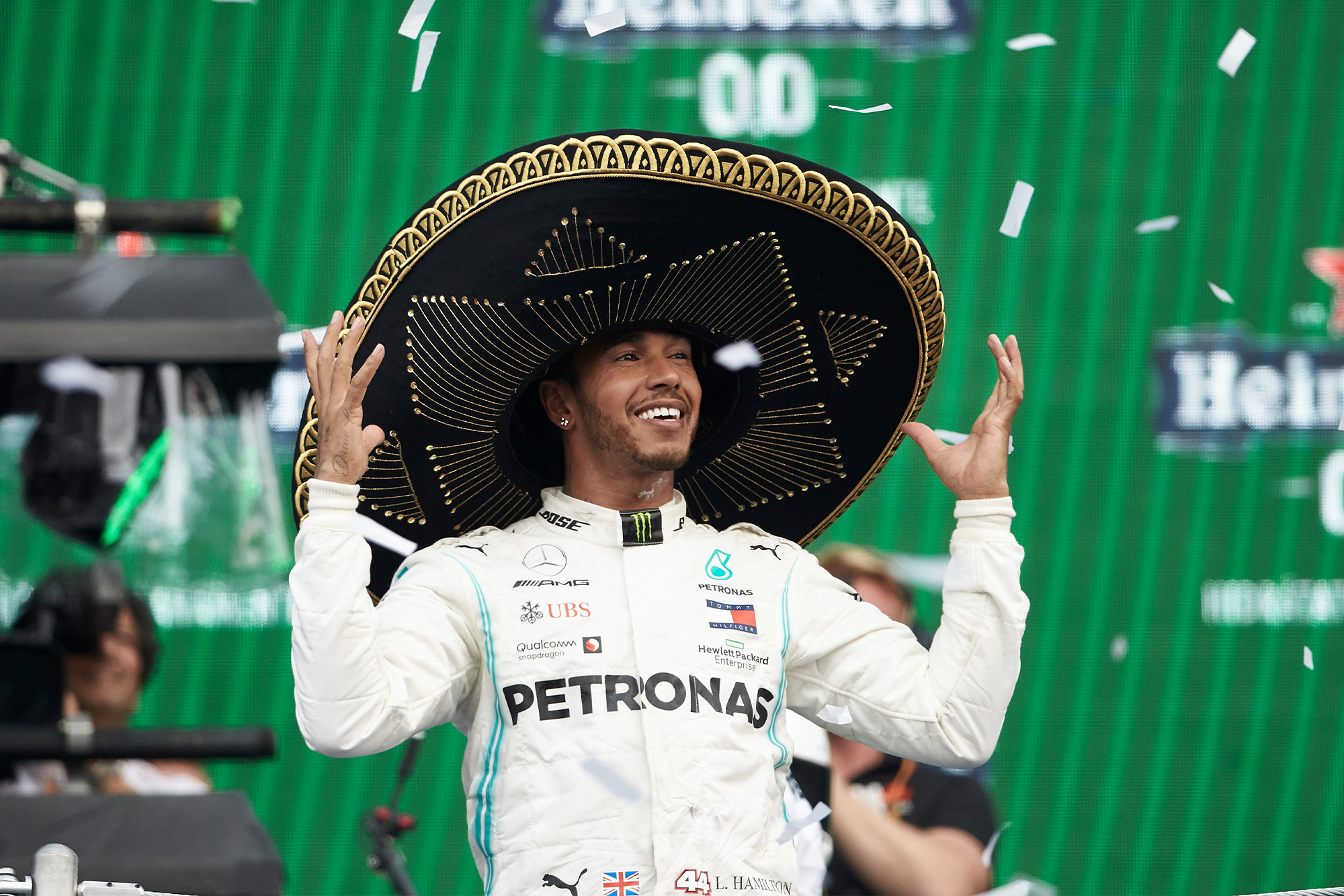 Ferrari locked out the front row once again, but Hamilton recovered from a first corner tap from Verstappen and trip across the grass to make a one-stop strategy work with a 49-lap stint on the hard tyres. He held Vettel at arm’s length despite a tyre life offset in the Ferrari driver’s favour to take his 10th win of the season and put himself just four points away from the title. 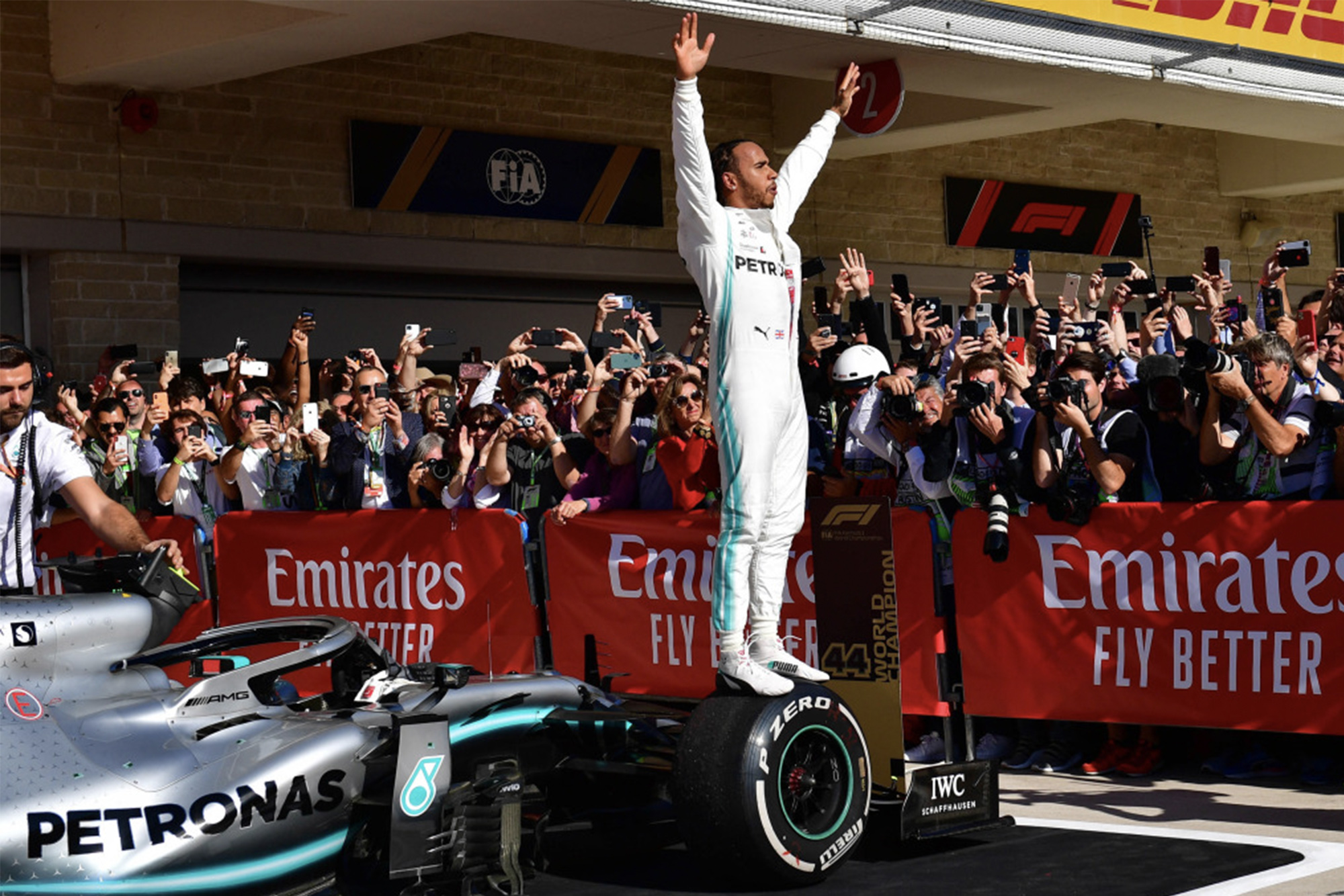 Hamilton wins his sixth championship to move clear of Juan Manuel Fangio and one behind Michael Schumacher Photo: Motorsport Images

A lacklustre qualifying left Hamilton with just too much to do on Sunday, but his fightback from fifth to second was more than good enough to win a sixth drivers’ title with two rounds remaining. Passing both Ferraris on the opening lap, he went on to make an unlikely one-stop almost work for him to hold off Verstappen for a championship-clinching second.