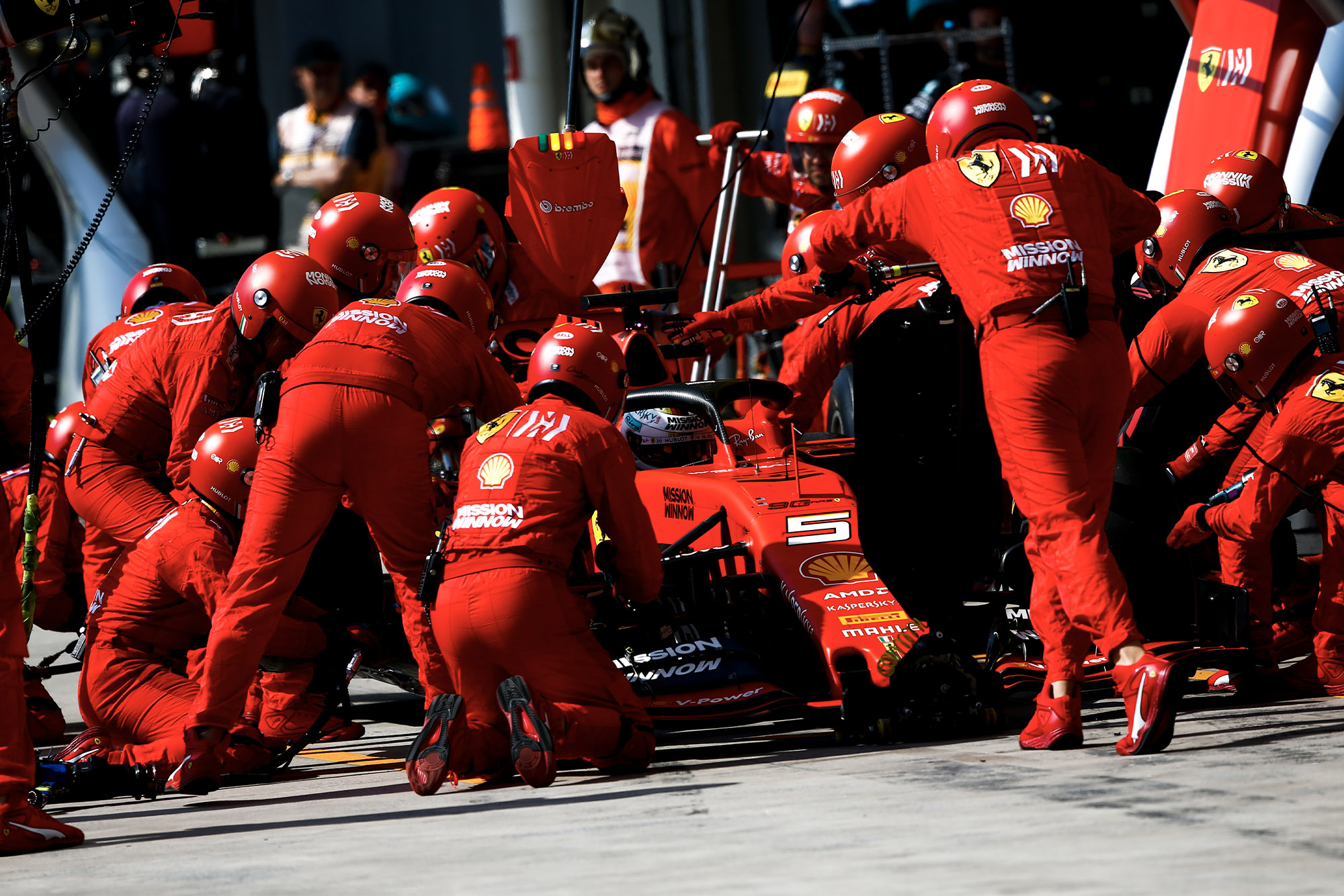 2019 was a case of what could have been for Scuderia Ferrari Photo: Motorsport Images

The early signs were positive.

After the first week of pre-season testing, no-one was in any doubt as to the fastest car of 2019. “Ferrari is ahead of the pack,” said Mercedes boss Toto Wolff.” Lewis Hamilton was downbeat: “We still have a lot of work to do. This is going to be the hardest year yet”.

There were predictions that it would be a struggle to get close to, let alone beat, the matte red cars and a team buoyed by the fresh approach of Mattia Binotto, the new team principal.

Then the season started. From Australia to Abu Dhabi, Scuderia Ferrari went from one disaster to another and the sparks of potential were extinguished just as quickly as they appeared.

Even before the engine upgrade that Mercedes described as “ridiculous” it was clear that the team had the speed and talent necessary to compete for the championship. It just struggled to apply them on race weekends.

Repeated errors became the norm for the Maranello outfit, as Mercedes recorded an eight-win streak, and it ended the season looking back at what might have been. Again.

For a third straight season, Ferrari’s failure to mount a championship challenge can be traced back to critical moments where the team or its drivers made the wrong – or simply bizarre – call, and where the car let them down. This is how Ferrari lost the 2019 championship. 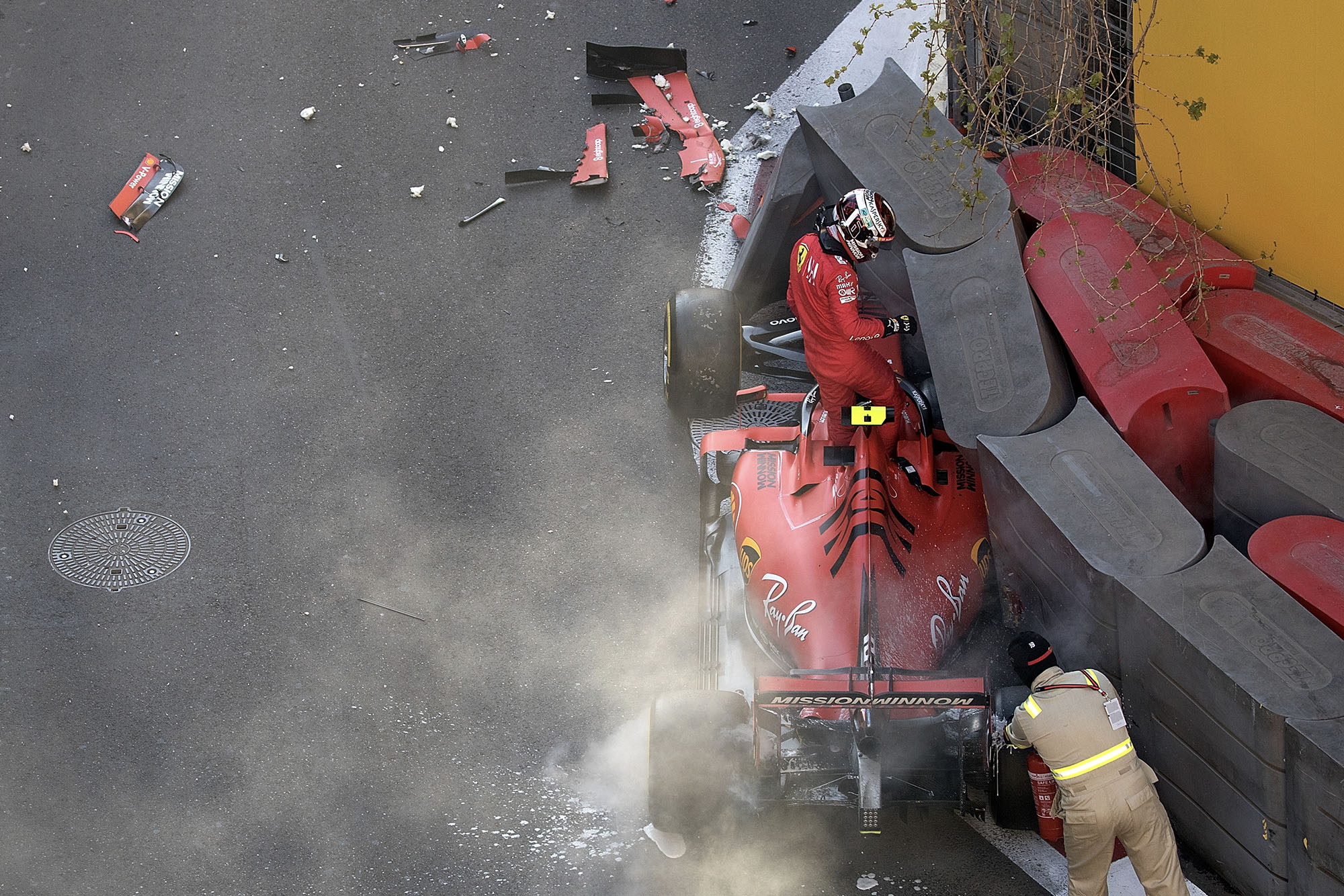 Leclerc’s Baku crash was just one in a long list of errors from the Ferrari pair Photo: Motorsport Images

Though many Tifoso will point fingers at the strategy department at Maranello for recent woes, the hands at the wheel are far from innocent.

Hamilton was able to build an early lead in the championship as Vettel committed early-season errors in Bahrain and Canada, costing him a win on both occasions.

His spin in Sakhir relegated him down the order but had he held onto his position versus Lewis Hamilton in their fight for second place, he would have inherited the win from his team-mate.

Despite counting himself as the moral winner in Montreal, his points tally did not in a race that was his best chance of securing a win up to that point in the season.

A win in Canada might have proved pivotal, curtailing Hamilton’s momentum in the championship but an error from Vettel, and a penalty for rejoining the track in an unsafe manner, handed Hamilton victory number three of a four-race win streak that all but sealed the title by June.

Leclerc made his first serious error of the season in Baku qualifying where he crashed out. It hurt Vettel too by delaying the session so the track was more favourable to Mercedes. Vettel could only manage third on the grid.

Again, the mistake came at a time Ferrari was in desperate need of a good performance to halt the Mercedes freight train, The Azerbaijan race was the Silver Arrows’ fourth straight one-two and it looked like game over for Ferrari already.

In Austria, Leclerc was shown up by the charging Max Verstappen in their closing lap battle. His inexperience of fighting at the front showed against the Dutchman. Later in the season, Leclerc would develop an edge in wheel-to-wheel combat.

Victory finally came in Belgium, but a potential 1-2 on home soil at the following race in Monza was lost after Vettel span from fourth, then clumsily rejoined in the path of Lance Stroll.

Frustration was setting in as the SF90 had a clear straightline advantage in race; neither Mercedes could nail Leclerc for the lead, and Vettel should have been able to cruise by Bottas and Hamilton with DRS — had he been in a position to do so.

The championship had already been lost by the time breaking point arrived in Brazil. Vettel moving across his team-mate’s line, causing race-ending contact that was avoidable and unnecessary.

Vettel was seen staring into space at the side of the track, perhaps musing over a season where neither driver was at the top of their game for long enough to form a serious title bid. 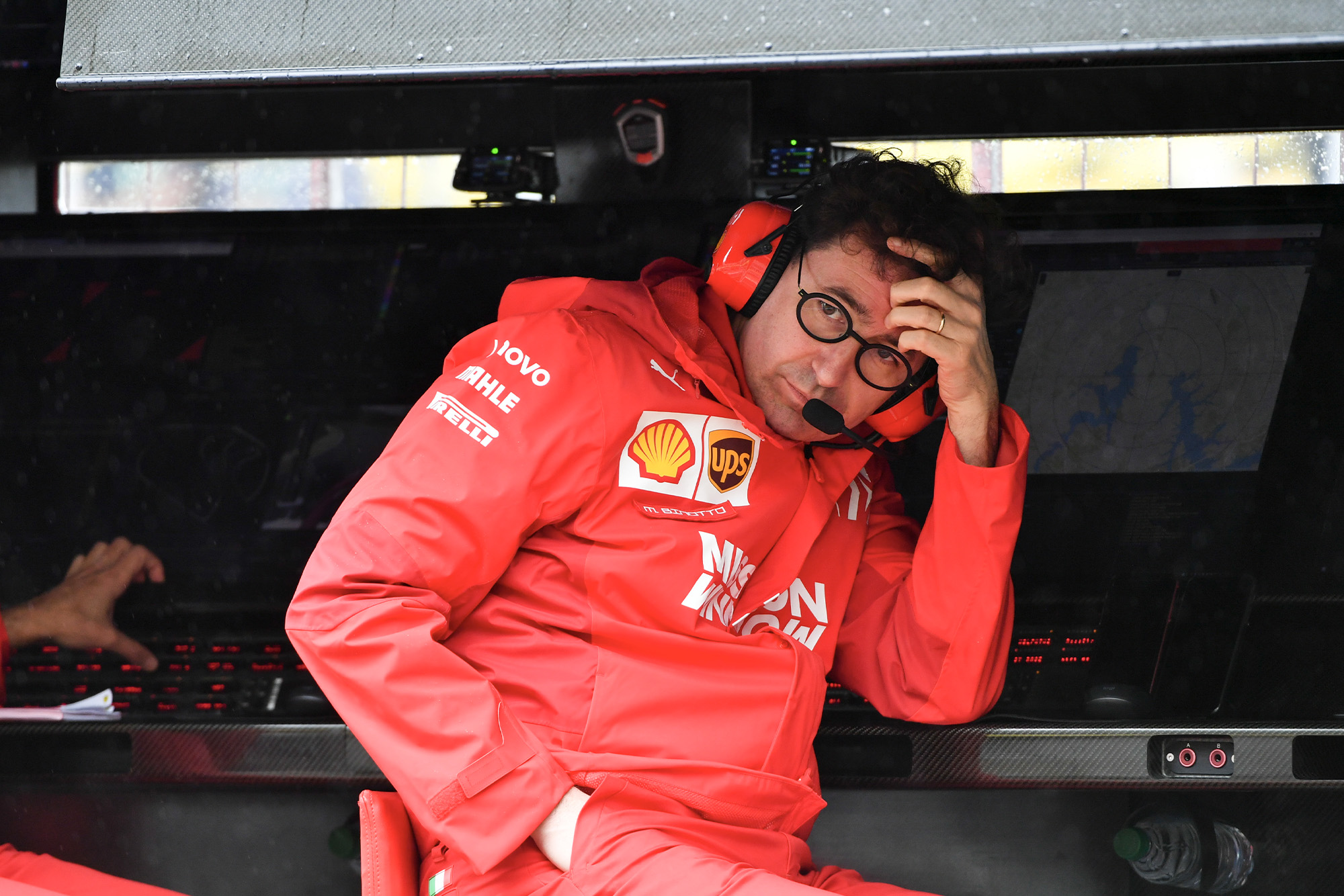 Binotto had to deal with the headache of two number one drivers fighting for supremacy all year Photo: Motorsport Images

Team orders were where Ferrari’s disarray became all too public, with increasingly heated radio exchanges as the season went on.

Immediately in Australia, Bahrain and China, Ferrari put its drivers in an uncomfortable position. In each race, one of the drivers was asked to let the other by, sowing seeds of acrimony between the two despite well-meaning intentions.

That awkwardness was just the prelude, which culminated in the debris strewn across the track at Interlagos.

The Leclerc-Vettel relationship continued to sour during the second half of the season, as the competitiveness of the SF90 increased and the drivers were fighting over race wins.

There was no coming back from Q3 in Monza where Leclerc refused to pay back a tow to Vettel, helping to ensure that he took pole position.

The situation in Russia was an extension of the underlying distrust that had spawned. Leclerc towed his team-mate into an early lead, which Vettel then refused to give up as had been agreed beforehand — the full dispute playing out over team radio.

A zero-point finish in Brazil, courtesy of the pair’s clash, could have spurred Binotto to choose a number one driver, but he has made clear that both will receive equal backing next season.

It seems inconceivable that the rivalry between two fiercely competitive drivers won’t raise its head again in 2020, particularly if they are in with a true chance of the championship. 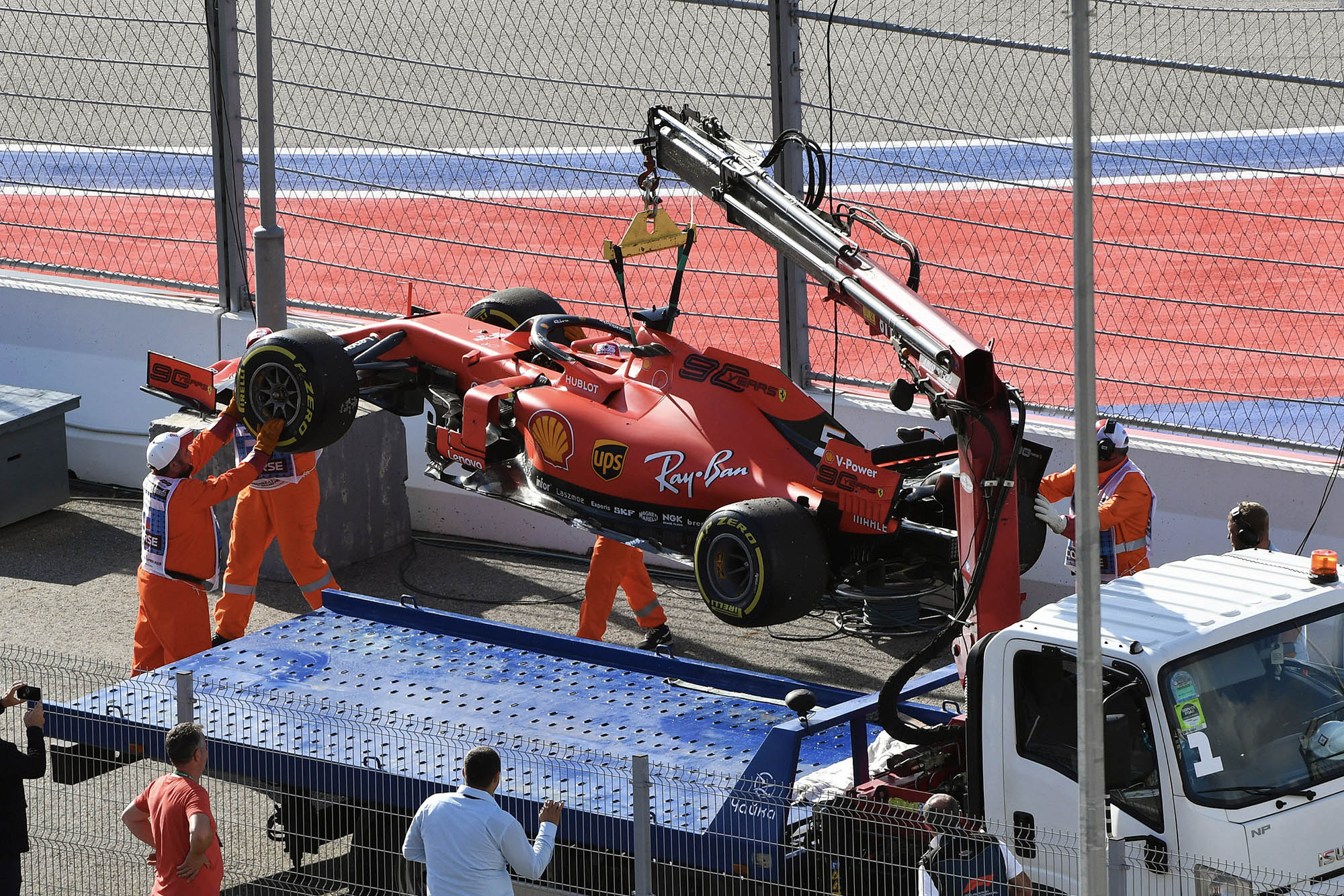 Sebastian Vettel is forced out of the Russian Grand Prix with an electrical issue Photo: Motorsport Images

Reliability has been a strength of Mercedes in seasons past and 2019 was no different. It’s a weakness for Ferrari that proved costly on several occasions when victory was a realistic prospect.

Leclerc was set for a maiden F1 win in Bahrain, but it was snatched away in Bahrain in heart-breaking fashion as his engine lost power. His cries over the radio were heard by his powerless team on the pitwall, as Hamilton assumed the lead.

A qualifying meltdown in Germany took both drivers out of contention with a front-row lock-out begging, differing issues leaving Leclerc in 10th and Vettel right at the back.

Any flickering hopes of a championship in 2019 faded on that Saturday, despite Vettel’s recovery to second and Hamilton’s eventual ninth-place finish.

Vettel’s electrical failure in Russia came when another one-two was looking likely despite already being embroiled in a team orders fiasco.

In an era of unprecedented reliability, the points lost due to unreliability would have left Ferrari severely hampered in its championship challenge, even without the other issues.

Even if Ferrari maintains its straightline speed advantage next season, the car will have to be much more dependable from start to finish. 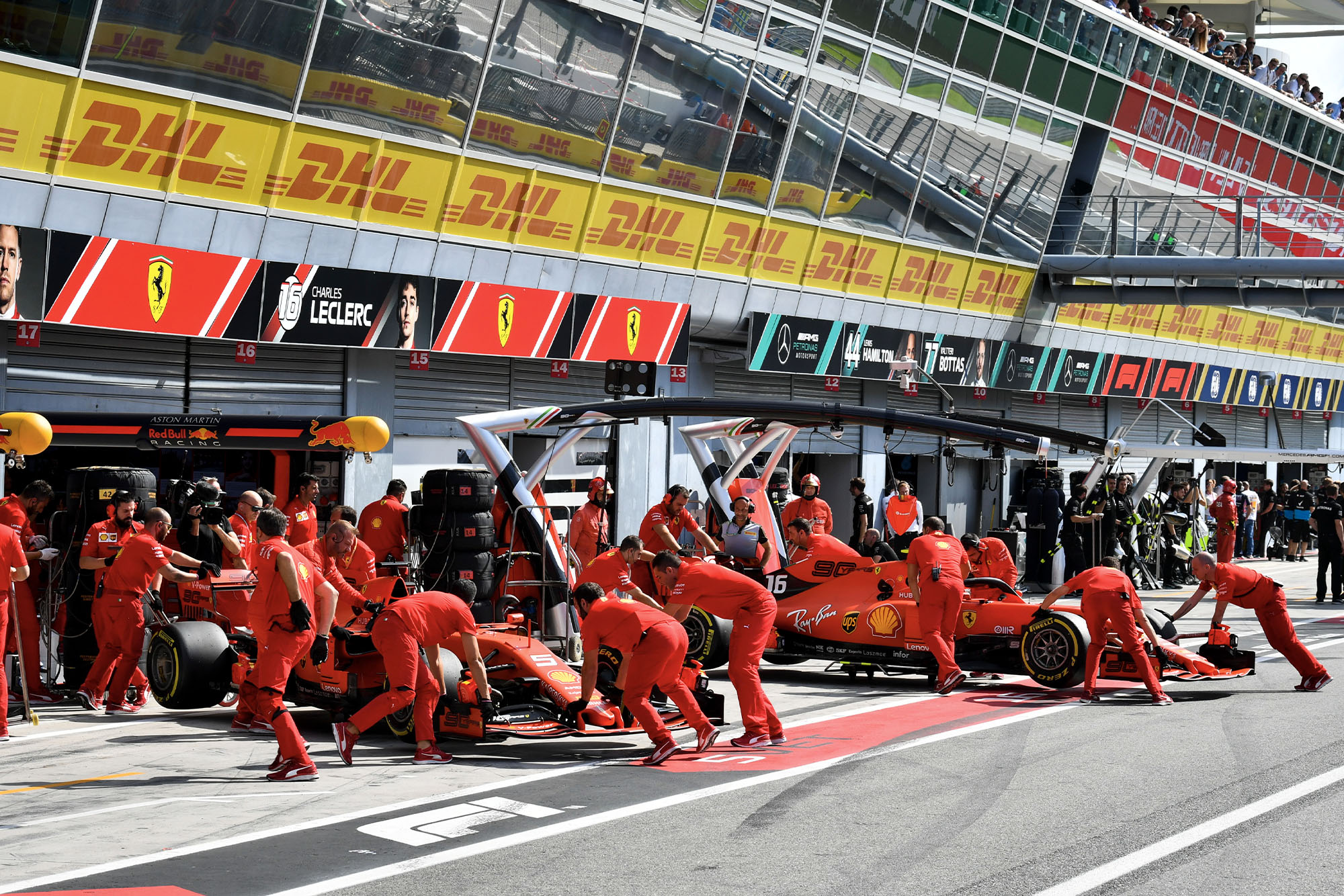 Ferrari underperformed on a regular basis in 2019 Photo: Motorsport Images

Ferrari was arguably at its best as a team on just two occasions this season: Belgium and Singapore.

Belgium was the only race the drivers worked in harmony, Vettel playing rear gunner admirably and holding up Hamilton to enable Leclerc to score his first win.

Singapore, although dysfunctional after the team inadvertently undercut Vettel ahead of pole-sitter Leclerc, was a one-two taken on pure pace ahead of its rivals.

But elsewhere, the team showed an inability to maximise performances when the momentum is with them.

Leaving Leclerc in the pits in Q3 at Monaco for him to be knocked out by his own team-mate was an embarrassing mishap but was just another example of the poor decision-making at Ferrari.

Both drivers had to dictate strategy throughout the season, with the pitwall unwilling to be proactive during races.

Mercedes may not have been the outright fastest team in the second half of the year, but its consistency enabled it to wrap up a sixth-straight constructors’ title with four races to spare.

Ferrari still couldn’t execute to the level of its rivals in the final round of the year.

Leclerc missed out on a final qualifying run in Q3 and botched a double-stack pitstop in the race to put Vettel under pressure from Alex Albon. Not to mention the incorrect fuel measurement declaration leaving clouds over Leclerc’s evening before he could even turn a wheel.

Once again, both drivers were acting as their own strategists at times. Abu Dhabi was a microcosm of the team’s entire season: chaotic and uncertain. 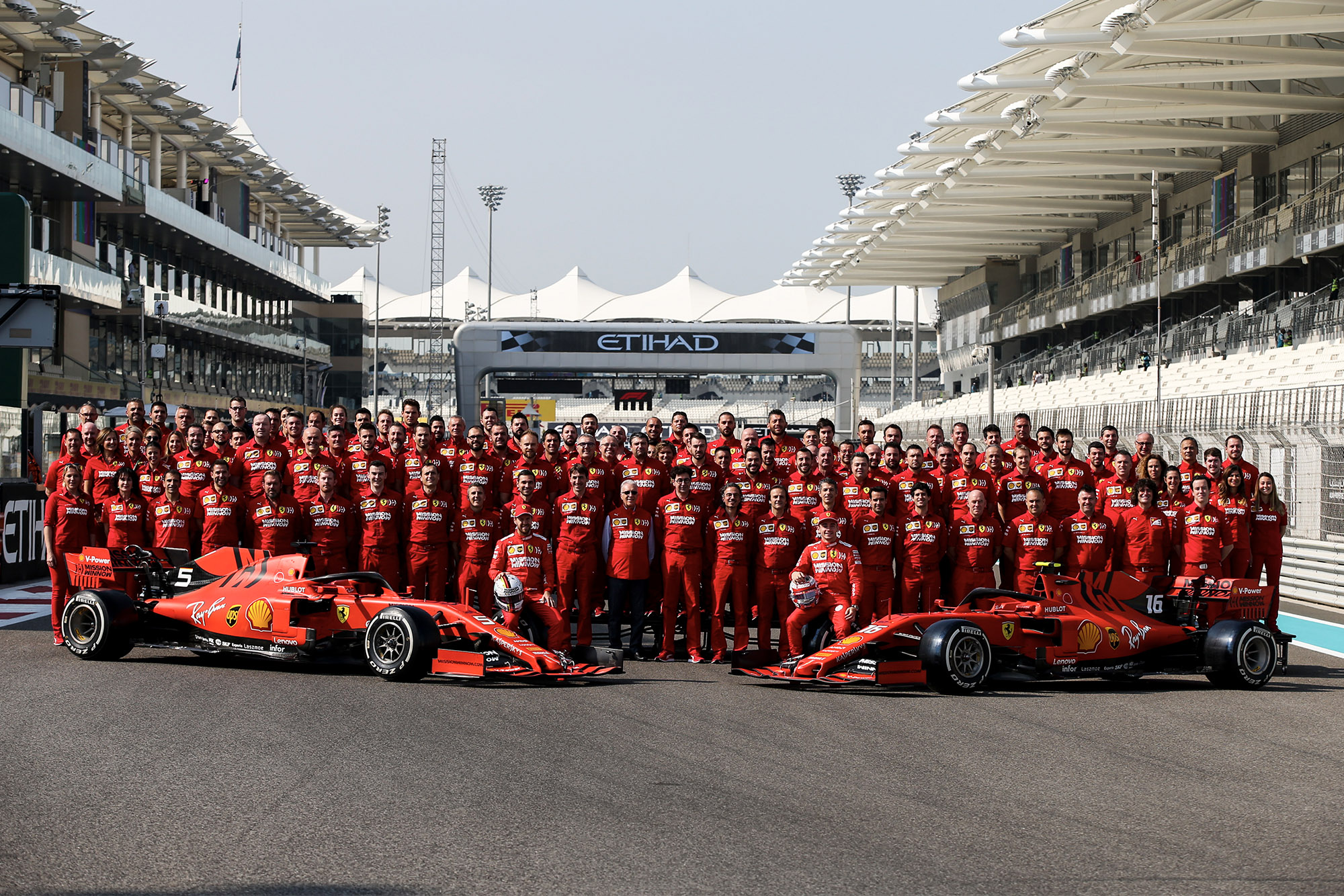 A talented team yet to achieve what it is capable of Photo: Motorsport Images

Ferrari won races in 2019 in spite of itself, what could have been if the team was working in harmony? A slicker operation and greater driver co-operation would have led to more respectable points hauls and a lengthier title fight.

The team was certainly more capable of scoring the 504 points in the constructors’ standings and fourth and fifth in the drivers’ that it did.

The pieces are there, but as a total package, Scuderia Ferrari is not performing to the level it is capable of reaching.

It simply cannot afford a repeat in 2020, the final chance at a title before the regulations and targets shift once again.