The first Dutch Grand Prix since the 1980s is set to be a real challenge for drivers.

A tight, twisty and demanding redesign of the Zandvoort circuit will put the best to the test with qualifying laps expected to result in around 5-6g in some corners.

Max Verstappen will have incredible support all weekend and is the favourite heading in, but who else is a stand-out option for you in terms of F1 Fantasy points?

George Russell is riding high from his maiden F1 podium and rumoured 2022 Mercedes deal, while Ferrari’s form dipped in the wet weather of Spa.

Here are some picks to consider, form to take note of and drivers to avoid for this weekend’s Dutch Grand Prix.

Sebastian Vettel’s Spa performance has gained him 0.1m in value since the Belgian GP. F1’s newest winner Esteban Ocon has joined him in rising in price. The Frenchman is valued at 10.2m and has been steadily rising for several races.

Red Bull’s quick work turning around Sergio Perez didn’t gain it a double points-scoring weekend at Spa, but the team is the only one to rise in price since last weekend. A jump in 0.1m to 26.6m makes the team an expensive but viable option.

Only Alfa Romeo has dropped in value since last weekend. The Swiss team finished 13th and 18th in Belgium while Russell’s podium put Williams well out of reach in the short term.

There may never have been as much home support for a driver than there is for Max Verstappen this weekend. The Orange Army will be powering their man to what they hope is a critical victory in the championship fight against Lewis Hamilton. The Red Bull’s high-rake philosophy should make it the car to beat around Zandvoort’s demanding layout. By the same token, Red Bull would be a great decision for your constructor option. 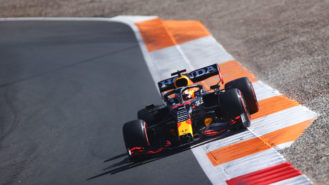 Max Verstappen was flying in final practice ahead of qualifying, setting himself up well for a potential pole position

If there was one qualifying that mattered outside of the Monaco Saturday, Zandvoort might be that one. The redeveloped circuit has been designed to encourage overtaking but punishing gravel traps mean overtaking will be tough making qualifying crucial. George ‘Mr Saturday’ Russell would be a good pick then. The Williams driver had something of an anyonymous Friday but always turns up the wick in qualifying. Expect him to move forward and up the order in FP3.

Ferrari finished Friday’s running top of the charts with a one-two headed up by Charles Leclerc. Carlos Sainz was a whisker away in P2, but the Scuderia will be hoping the medium to high speed corners of Zandvoort don’t aid McLaren as engines start to get turned up. Keep an eye on FP3 times but so far, it appears as though either driver in red is a good option.

Mercedes had the measure of Red Bull in Hungary courtesy of track conditions and temperatures falling in its favour, helped by its rival struggling to identify an ideal set-up window. Spa did little to help us figure out which of the two teams have the advantage in the dry, but a high-rake philosophy will be less competitive in Zandvoort than in Belgium one week ago. Priced at 37.1m, it’s an expensive asset you will want to avoid.

Daniel Ricciardo’s qualifying exploits at Spa were probably the high-point in his first season with McLaren. The Australian secured fourth in the wet which meant six points after the rewards were halved on Sunday, but his qualifying form overall has been disappointing. Around a track that will be difficult to overtake, he is one driver that you’ll want to avoid should his usual form prevail on Saturday afternoon.

Zandvoort has caught a few drivers out already during both Friday practice sessions. Yuki Tsunoda and Nikita Mazepin were two to suffer spins as the F1 rookies got to grips with a brand new venue to the 2021 calendar. The AlphaTauri driver has said he’ll be working overnight to address his issues while Mazepin is stuck in a Haas so expect no miracles. Either driver would be a risky option for this weekend based on the evidence so far.