It has never been possible to score Formula 1 World Championship points in qualifying – a corresponding grand prix is always required, even when it amounts to only a handful of laps behind the safety car

But always it has been possible to make your point powerfully – and to prove it succinctly.

George Russell’s sensational qualifying lap at Spa-Francorchamps sent the geeks – we know who we are! – rifling through the record books seeking a better one.

For sure, rarely has a car so far down the pecking order started from so high on a GP grid; Williams lay eighth in the constructors’ championship prior to last weekend. (It continues to do so – despite Russell’s half-points second place helping it to double its total to 20.)

The same was true of March when it arrived at the 1975 Swedish GP. This was courtesy of Vittorio Brambilla’s fifth place at a half-points Spanish GP of tragic consequence; drivers’ safety concerns were only partially acted upon.

The burly Italian had been exhibiting great qualifying speed in what was a beefed-up Formula 2 car that tended to fade during GPs. His pole position at Anderstorp, however, can be attributed to car designer Robin Herd’s cheekily sweeping a pit board through the timing beam fractions before his driver’s arrival.

So we can’t count that one, as much as I would like to. (March finished an eventual eighth that season.)

Riccardo Patrese’s pole for Arrows at Long Beach for the 1981 United States GP was full of promise, it being the season-opener. But that, too, would fade. (Arrows finished an eventual joint eighth that season.)

When Andrea de Cesaris kept it out of (mainly) those same walls to grab pole – then the youngest to do so – in 1982, his Alfa Romeo team had yet to trouble the scorers.

Unfortunately, he was unable to keep out of those walls during the race and, 13 rounds later, Alfa would finish 10th among the constructors, with just seven points to its name.

Yet that was one position and three points better than its 1980 campaign – despite Bruno Giacomelli’s stunning pole at the Watkins Glen finale and his leading that United States GP as though born to it and until an ignition coil fizzled.

Powerful points can be made in generally more competitive cars, too.

Eugenio Castellotti was in his cups after Lancia team leader Alberto Ascari’s death yet persuaded the moribund team to send one of its D50s to Spa. With it he seized a provisional pole for the 1955 Belgian GP before bad weather set in.

Stuart Lewis-Evans was the ‘junior’ member of Vanwall’s ‘Best of British’ squad when he stunned Stirling Moss and Tony Brooks as the team swept the board in qualifying for the 1957 Italian GP at Monza. He and it would repeat the feat at Zandvoort’s Dutch GP of 1958.

Innes Ireland’s bursting from the middle of the front row at the season-opening Argentine GP of 1960 not only proved that Lotus designer Colin Chapman had finally received and returned swiftly the rear-engined message but also that he had put his scientific stamp on it.

Later that season John Surtees used the same Type 18 model to seal his transition from two to four wheels with a pole across the cobbles and tramlines of a Portugal GP at Oporto.

His pole at the 1962 Dutch GP on the occasion of Lola’s F1 World Championship debut had a less-lasting effect. As would his somehow-squeezing of a bulky Cooper-Maserati between the Ferraris of Lorenzo Bandini and Mike Parkes on the D-road narrowness of Reims for the 1966 French GP.

That latter front row might just be the most ‘loaded’ in F1 history. Not only was Surtees ‘giving the finger’ to his very recent former employer, but pole man Bandini – a pawn in team manager Eugenio Dragoni’s schemes – was desperate to prove that he had what it took to lead the team, while new team-mate Parkes, whose relationship with Surtees was testy to say the very least, had been champing at the F1 bit for years.

Mario Andretti’s pole on F1 debut, for Lotus at Watkins Glen’s 1968 American GP, was very different: Chapman had told him in 1965 to call when he felt ready. When finally he did so, Mario was more than ready.

Alongside Andretti that day was Jackie Stewart – a master of this art. 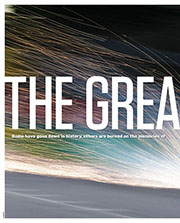 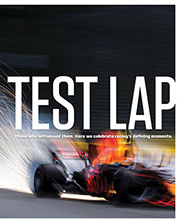 Some have gone down in history, others are burned on the memories of those who witnessed them. Here we celebrate racing’s defining moments. Juan Manuel Fangio CAR Maserati 250F DATE…

Stewart’s acing of a front-row start at Kyalami earlier that same season proved that newcomers Matra – briefly using a beefed-up F2 car yet to be painted – was going to be an F1 force.

His pole at the same circuit the following year proved that newcomer March was not a ‘Much Advertised Racing Car Hoax’.

And his pole at the 1971 Canadian GP for brand-new constructor Tyrrell proved that you didn’t need to be able to make missiles or satellites, or believe your own massive hype, to build a competitive Formula 1 car: you could do so in a suburban garage in Leamington Spa and a wooden shed in Surrey, if you put your mind to it.

This was not so much the case by the monolithic 1990s – yet the smaller teams still had their (Satur)days: Rubens Barrichello, in the rain at Spa, for Jordan in 1994, and for Stewart Grand Prix, in the rain at Magny-Cours, in 1999; and Giancarlo Fisichella for Jordan at Hockenheim in 1997.

Youngest pole-sitter Sebastian Vettel, in the wet at Monza in 2008, albeit admittedly in an Adrian Newey-designed Toro Rosso, and Mark Webber, for a Jaguar that slept rather than leapt and a perceptibly fading Williams, plus an early iteration of Red Bull, made people blink in the 2000s, too.

Those dwindling Williams front-row moments subsequently included: Nico Hülkenburg’s pole on slicks on a drying Interlagos in 2010; Pastor Maldonado in Spain – once Lewis Hamilton’s McLaren had been thrown to the back for fuelling irregularities – and also, this time alongside Hamilton, in Singapore in 2012; a 1-2 at the Red Bull Ring for Felipe Massa and Valtteri Bottas in 2014; and – the youngest, at 18 years 310 days – Lance Stroll’s at Monza in 2017.

But none of the above possessed the je ne sais quoi of Russell’s.

Hang on! Didn’t Teo Fabi put a Toleman-Hart on pole during a rain-hampered, two-day qualifying for the first German GP held at the new Nürburging?

The diminutive Italian is infamous for not having led a lap of a GP despite his three poles, all for this Witney-based team, but that TG185 of 1985, despite its Rory Byrne-designed neatness, failed to score a point all season…

Even so, both of Russell’s are more powerful: squeezed into a Mercedes at Sakhir in 2020 and squeezed from a Williams at Spa on Saturday.

It was plain that a Ferrari ‘Sharknose’ was going to win on Monza’s combined road course/banked oval, most likely driven by either Wolfgang von Trips or Phil Hill in their face-off for the world title.

Yet Enzo had artfully/mischievously/recklessly tossed a Mexican firecracker into a powder keg. His regular aces were hardly amused – even before Rodríguez used an old-spec engine to separate them at the sharp end of the timesheet.

Sadly, as was the sport’s wont then, the race would be overshadowed by death – the most calamitous accident in F1’s history claiming von Trips and 15 spectators. Not that it was red-flagged!

Rodríguez, in turn, would be killed just over a year later at the wheel of a fast but fragile Lotus – though not every witness blamed car failure.

Our rose-coloured spectacles have a dark side and we must not become blinkered to modern mores.

While, of course, continuing to glory in talents like Russell’s: point made; point proven; ascendant star; and a Three-pointed Star, surely?

PS Those hardy spectators at Spa should be refunded.