Had Sebastian Vettel and Kevin Magnussen not collided at Tosa on the first lap, leaving part of the Ferrari’s endplate on the track, Valtteri Bottas may very well have dominated the Emilia Romagna Grand Prix. He’d beaten Lewis Hamilton to pole by a tenth, he’d out-dragged him off the startline – and there was the cushion of a slower Red Bull between them. His opening lap was all purpose and aggression, pulling out great chunks of time over the following Max Verstappen at each corner, the Mercedes working beautifully on the medium tyre. At the end of that lap he was already 1.2sec ahead of the Red Bull and pulling away. Hamilton could find no way around the Red Bull because Imola, for all its beauty and the thrill of seeing the latest F1 cars dissect the place, is not a passing sort of track. So how was Bottas possibly going to lose from there?

They’ve had a bit of a niggle on-track already this season. Recall at the Nürburgring they raced quite rudely with each other for a couple of corners, light contact being made. Seb probably feels he shouldn’t be dicing with a Haas. But that’s where his current problems have placed him. Four-tenths slower than team-mate Charles Leclerc wasn’t enough to get him through to Q3 – yet again. It left him only 14th on the grid – behind the Williams of the over-delivering George Russell. And only three places ahead of Magnussen.

“I was dicing with George into Turn Five-Six at the start,” recounted Vettel, “but I had a bit of a moment, lost momentum, allowing Kevin to go side-by-side [into Tosa]. I was on the inside and didn’t have much room. I tried to avoid him but we had a small touch which ended with him spinning.”

And Vettel dropping half his right-hand-side endplate on-track, on the exit of the corner. The next car to pass over this piece of track would be the leader on lap two: Bottas. “I couldn’t react quick enough to miss it,” recounted Bottas, “so I just made sure I drove over it with the centre of the car so that I didn’t puncture a tyre.”

It didn’t puncture a tyre but the endplate lodged in the Merc’s left-hand barge board cost it around 0.7sec of aerodynamic performance (according to the team’s calculations). The car was now sliding through the high speed corners, locking its brakes into the slower ones. Even at 0.7sec off its best, that was still comfortably enough to allow Bottas to retain track position over the Red Bull. But he could no longer pull away from it.
Meantime, Hamilton just tracked them both, tried to stay out of the turbulence, reckoned he might try to beat them through running longer and therefore wanted to look after his tyres.

Here’s the piece of debris we just removed from VB’s car👇 pic.twitter.com/C4GrYR7ohn

The medium tyre on which both Mercedes and Verstappen had started the race was reckoned good for 30 laps or more. From there, you’d use the hard tyre to get to the end. That was the fastest strategy in theory – and of the top-10 qualifiers it was only available to this trio. Because only they had been fast enough to forego the faster-qualifying but less durable soft tyre in Q2.

The hard tyre was good for as many as 50 laps. So in theory you could stop very early and still do a one-stop (the very long pit lane discourages two-stop even more than usual). It would be slower. But there’s elapsed time and there’s track position. 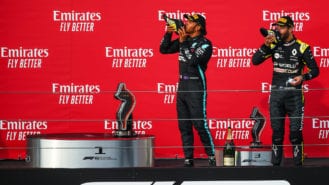 Lewis Hamilton predicted Imola was going to deliver a boring race, and for 48 laps he was generally right. But it’s not just overtaking that leads to excitement and the…

Red Bull didn’t know anything of Bottas’ problem. As far as it knew, Verstappen’s RB16 was there on merit. But once past lap 10, his relentless pushing and probing of the Merc in the dirty air was beginning to degrade his front tyres. So before he began losing too much ground, Red Bull brought Verstappen in as early as lap 18, attempting to undercut ahead of the leader.

Mercedes knew of Bottas’ problem, of course. They knew he was actually holding the Red Bull up. As soon as Verstappen pitted, it was imperative that Mercedes bring Bottas in immediately otherwise he’d surely lose the position. He exited still just in front of the Red Bull, both cars now on the hard tyres on which they reckoned on going to the end.

But this was way earlier than the ideal pit stop window. It left Hamilton leading the race in a healthy Mercedes on tyres that still had perhaps 20 laps of life in them. He was leading by 23sec as Bottas rejoined. The pit stop loss would be around 27sec. So he just needed to pull out an extra 4sec or so over a hobbled Bottas in the next 20 laps. Easy.

As Hamilton let rip, so Red Bull realised it was not in the same performance league as Mercedes on the day, after all, and it was fighting only for second. Bottas’ problem and how it had dragged Verstappen in early had effectively taken both cars that might have beaten Hamilton out of the equation.

Just six laps after Bottas had rejoined, Hamilton had increased his lead to around 26sec. One more lap and he’d surely have the required pitstop gap. But why pit so soon and with such a narrow margin? Well, because he was about to encounter a great long line of tailenders. On the Mercedes pitwall they considered their choices. Did Lewis think he could manage another 10 laps? Yes, he did. The tyres were still good. So they left him out there, with a loose target to stop on lap 34.

He threaded his way through the backmarkers remarkably skilfully, minimising his time loss. He still managed to pull out time on Bottas in the following five laps. The gap was out to over 28sec by the 29th lap – the backmarkers had all been passed and still his tyres were fine.

Then Esteban Ocon’s Renault suffered a clutch problem which impacted upon the gearbox, bringing him to a halt on the 30th lap. A Virtual Safety Car was deployed, applying its blanket 40 per cent speed reduction to the field. To pit with the field so slowed costs you 10sec less to that field than the 27sec of a normal pit stop. So long as you are in the right part of the track when it comes. Hamilton was just coming through Rivazza, a couple of corners before the pit entry. Perfect timing. He came in and exited still 10sec in the lead. That was the second bit of luck – but his great combination of pace and tyre usage had made pummelling use of it. And he’d already got the race won even before the VSC. That just made it easier.

Bottas, with his inconsistent aero, couldn’t hold off Verstappen indefinitely. On the second occasion that he’d locked up into Rivazza 1, he dropped a wheel into the gravel. He was consequently slow through Rivazza 2 onto the pit straight – and slow all the way down that straight. With the aid of DRS, Verstappen was able to drag himself past even before the Tamburello chicane.

Verstappen got to enjoy the clear air for just seven laps. He felt a vibration from the rear. Unbeknown to Red Bull, Hamilton was complaining of much the same thing. Yet their tyres weren’t particularly old or down on tread. Debris damage? Whatever, the teams were nervous. Then Verstappen’s right-rear tyre blew on the way down to the Villeneuve chicane, flat-in-top, spinning for an age before coming to rest in the gravel trap.

The safety car came out just after Hamilton had passed the pit entry. But Bottas came in and had a fresh set of softs fitted as a precaution. Hamilton was brought in, still under the safety car, on the following lap. Having to follow the safety car for a lap while Bottas – being some way further back – had merely to adhere to the safety car delta speed (faster than the S/C itself) – lost Hamilton some time to Bottas. But not enough to lose him the lead. Hamilton wanted to make sure, though, and accelerated hard from the pit exit up to the S/C 2 line that defines the positions. Hence you may have heard his engineer, concerned that Hamilton was going to break the imposed delta speed, repeating ‘delta-delta-delta’ – and Hamilton reassuring him to ‘calm down’, that it was under control.

So another Mercedes 1-2, a seventh consecutive constructors’ title (beating Ferrari’s record from 1999-2004) and the mathematical certainty, with four rounds remaining, that the World Champion will be a Mercedes driver.

“It was incredibly intense,” said the man celebrating his 93rd grand prix victory, his ninth from 13 so far this season. “Physically quite draining and mentally, mainly because it’s a very fast circuit, very bumpy. After I fell to third my next strategy was to try and get by the Red Bull but it was just impossible to get close and in trying to get close I was killing the front tyres. So I backed off and just tried to keep within distance. Then Max stopped much earlier than I thought he would and Valtteri stopped to cover him and there was no way I was doing the same. Naturally, at the beginning of the race we get given a bunch of different options of strategy and I understood that if I was in that position the only way to do something was to do something different – to extend as long as I could. That’s where the race was won today.”

That and the bit of Ferrari debris at Tosa.