It’s not so much the title fight that just got more serious, but the personal battle of wills between its two combatants. The title fight still favours Red Bull and Max Verstappen despite their ending the weekend with a totalled car and Verstappen in hospital while Lewis Hamilton celebrated – much to Verstappen’s distaste – his 99th grand prix victory, his eighth at Silverstone. The Red Bull is still demonstrably slightly faster despite Mercedes’ upgrades, despite Hamilton qualifying it fastest on Friday.

Prior to their incident at Copse on the first lap of the race, as Hamilton dived for the inside and Verstappen refused to yield, Hamilton has invariably been the one who has backed out of it when contact was threatened, Verstappen the one who has prevailed. We saw it on lap one at Imola and Barcelona and on the restart at Portimao.

Hamilton, seeing the championship slipping away but in front of an expectant – and huge – home crowd was resolved not to let that happen here. The new Saturday Sprint (the 17-lap mini-race to determine Sunday’s grid) had underlined the fact that despite Hamilton’s pole, the Red Bull remained quicker. His only feasible route to victory was to pass it on the first lap, before Verstappen had a chance to pull away. He would engage him in hard, no-compromise battle right from the start. Verstappen would race hard and with no compromise too – just the same as always. The way the track layout flows and the way the two cars performed defined the point of contact being at one of the fastest corners on the calendar. Verstappen, his right-rear wheel detached, spun hard into the tyre barriers, the impact recorded at 51g. Charles Leclerc’s Ferrari took the lead as Hamilton lost momentum from the impact, just before the race came under the safety car and subsequently the red flag.

“I naturally would not be bullied into being less aggressive”

“When someone’s just too aggressive these things are bound to happen,” said Hamilton. “I hope he’s ok because of course I would love to have a wheel to wheel battle for the whole race. I enjoy racing with him and I’m looking forward but I will never back down from anyone and I naturally would not be bullied into being less aggressive. I think today, this weekend, we needed the points and there was a gap. He left a gap and I went for it.”

Verstappen on social media: “Obviously disappointed with being taken out like that. The penalty given does not help us in any way and doesn’t do justice to the dangerous move Lewis made on track. Watching the celebrations after the race while still in hospital is disrespectful and unsportsmanlike behaviour but we move on.”

From the standing start restart Leclerc led all but the last two laps, Hamilton penalised 10sec at his pit stop for the incident and thereafter fighting his way past Norris, being allowed though by team mate Valtteri Bottas and putting a pass – on the inside at Copse – on Leclerc for the victory.

Hamilton, his Mercedes with barge board and floor tweaks around a circuit better-suited to its traits than recent venues, qualified fastest for the sprint, 0.075sec ahead of Verstappen. The latter was mystified about why his front tyres were just not loading up – completely in contrast to how the car had behaved all weekend up to that point. They weren’t coming up to temperature – at least not on a 37C track in Q3.

So was Formula 1’s first sprint qualifying experiment a success? It’s a difficult question to answer fully until the Grand Prix itself has played out, but the consensus among both…

In the much hotter conditions of FP1 at 46C it was way quicker. In the first runs of Q1 at 41C it was 0.4sec quicker (Hamilton did a second run to then equal Verstappen’s single early time). In the first runs of Q2, with the track temp falling to 39C the Red Bull was only 0.1sec faster. By the second runs, with the track at 37C, the Mercedes was for the first time faster – by 0.2sec – and that pattern was repeated into Q3. Red Bull had set the car up with a view to protecting the front tyres from blistering and this had perhaps contributed to its sensitivity to lower track temperatures.

For the Saturday Sprint race the track was a scorching 49C and once Verstappen had beaten a wheel-spinning Hamilton off the line, then defended hard down Wellington Straight and into Copse, he was up and away. Hamilton had no answer. Race day would be similarly hot.

A couple of details

Hamilton was cursing himself for having tried to line up his Sprint race pass into Copse on the outside. He should have tried the inside, he felt.

Mercedes had noted on the GPS traces that the Honda ERS-K was cutting through Woodcote. Not because there was anything wrong with it. It’s likely just a power unit setting used to protect the rear tyres. So that was where Verstappen was always going to be vulnerable on the first lap – and Hamilton knew that. That detail played its part in what happened at Copse on Sunday. 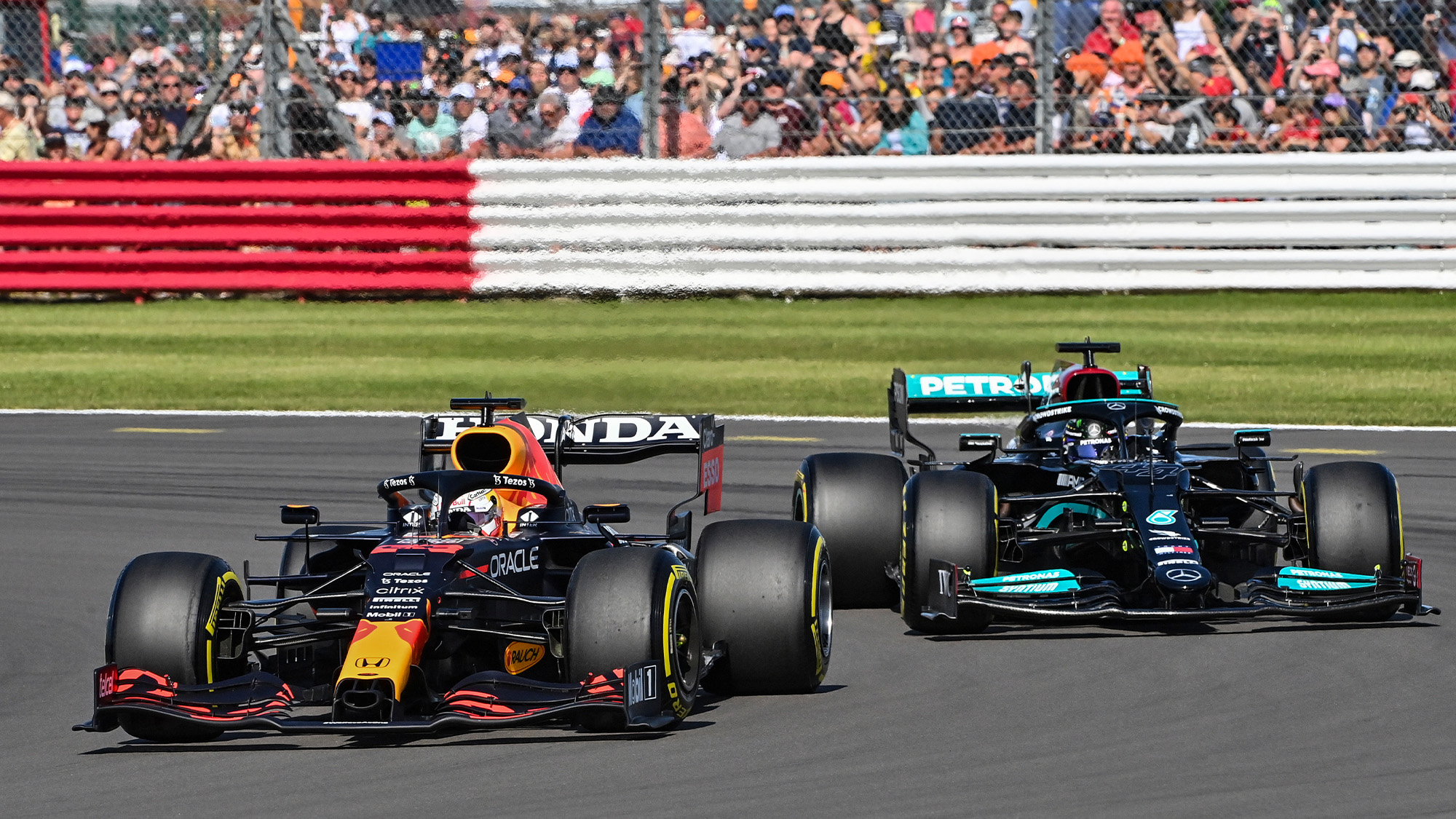 Leclerc qualified the Ferrari a brilliant fourth, held that position in The Sprint, keeping Bottas’s Merc in sight throughout, out-manoeuvred Bottas on the first lap of the grand prix, pounced upon the lead in the wake of the Verstappen/Hamilton collision, then led Hamilton for 27 laps in the first stint.

How did he do that in a Ferrari? He performed fantastically well but also Mercedes was not trying to threaten his position throughout that first stint. Knowing that Hamilton had that 10s penalty to take at the pit stop, it needed Hamilton to maximise the gap behind him before stopping so as to minimise how many places he’d lose. That first stint was only about running as long as possible to do that and maximising his tyre grip post-stop. Racing Leclerc could wait until then. There were 12 laps to go when Bottas pulled aside to promote Hamilton into second and Leclerc was 8.7sec ahead. So as Hamilton began lapping flat-out and Leclerc did the same in response, we saw the actual difference between the two cars – and it was the thick-end of 1sec different.

Leclerc was gutted but really shouldn’t have been. It was an impossible dream anyway.

Regardless of Leclerc’s starring cameo, this race was all about what has long been inevitable: the irresistible force and the immovable object.