I suspect most readers of Motor Sport couldn’t care less about Major League Baseball. To tell you the truth, I’m not a big fan myself. But bear with me.

In 1973, the American League adopted the designated hitter rule, which allowed managers to substitute a position player for the pitcher when their teams came up to bat. The change was made because pitchers looked so inept when they had to hit the ball instead of throwing it. Of course, this was precisely why I was against the DH rule – because forcing pitchers to bat showcased one of the sport’s essential truths.

Hitting a baseball is a supremely difficult proposition requiring superior hand-to-eye coordination. Pitchers don’t necessarily lack this skill, and many of them were star batters when they were kids. It was only because they chose to specialise in pitching that they were utterly overmatched at the plate by the time they reached the major leagues. For me, at least, there was something not only entertaining but also edifying about seeing a pitcher – by definition a superlative athlete – flailing away like a dweeb on national television.

Which brings me to Jimmie Johnson and his travails in IndyCar.

Johnson is, without question, one of the greatest drivers in American motor sports history. He’s won seven NASCAR championships, a record matched only by legends Richard Petty and Dale Earnhardt in far less competitive eras, and he earned most of these titles while outperforming his team-mate, a somewhat-less-than-shabby dude by the name of Jeff Gordon.

Still, Johnson had no experience in open-wheel cars other than off-road vehicles, and he hadn’t performed especially well on road courses during his stock-car career. He was faced with the daunting challenges of confronting new tracks, new driving techniques and new competitors. Plus, he was 45 years old, which is to say nearly – and, in some cases, more than – twice the age of the young lions currently dominating the NTT IndyCar Series. 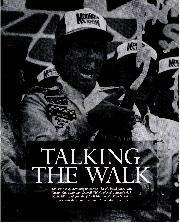 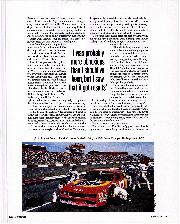 Bristol Motor Speedway in Tennessee sorts out the Good Ol' Men from the Boys. Even the 650-feet straightaways on the World's Fastest Half Mile' are banked — at 16 degrees,…

Although team owner Chip Ganassi optimistically suggested before the start of the 2021 season that Johnson might “squeak a win out,” Johnson himself was far more measured about his expectations. But the results have been far more nightmarish than he could have imagined.

During the first seven road course and street circuit races – ironically, Johnson is forgoing ovals – he’s been the slowest or second-slowest guy on the track during practice and qualifying, often posting times that are more than two seconds off the pole. His race pace has been slightly better, but several stints have been torpedoed by lurid spins, and he hasn’t finished a single event on the lead lap. The haters and trolls, predictably, have been having a field day.

I’m not sure what to think as I watch Johnson respectfully drive off-line to obey the blue flags and allow the fast guys to sweep past him. I know he’s not a rich kid who’s got a ride only because daddy paid for it. And I love the fact that his IndyCar experiment is a labor of love rather than an ego trip. “He doesn’t need the money,” says retired road-racing ace Scott Pruett, who was hired to coach him a few months ago. “He doesn’t need the accolades. He’s doing this because of his passion for driving.”

Which is cool. But at the same time, he’s not in IndyCar on merit, and he clearly wouldn’t be part of Ganassi’s super team if he hadn’t delivered a huge sponsorship deal with Carvana, an online retailer aiming to become the Amazon of the used-car market.

That said, this sponsorship is good not only for Johnson and Ganassi but also for IndyCar as a whole, which benefits from Carvana ads during race broadcasts. Another plus: Johnson’s celebrity has brought new eyeballs to the series, which has long struggled to attract fans despite some of the most compelling racing on the planet. So that’s a win-win.

The good news is that Johnson isn’t a w*****. What’s holding him back isn’t a lack of talent; it’s adapting to the techniques – new to someone schooled in stock cars – demanded by high-downforce open-wheel cars. “NASCAR and IndyCar are apples and oranges,” Pruett says. “He had to learn how fast these cars stop and how hard you can push on the brakes. We had issues at Detroit and Road America. But when we got to Mid-Ohio a couple of weeks ago, they were all but gone, and midway through the race, he was running a pace that was in the Top 10.”

I’m not quite ready to jump on the Jimmie Johnson bandwagon yet. Seems to me that 46 – which is how old he’ll be next year – isn’t the optimal age to master new tricks. True, his teammate Scott Dixon is still a stud at 41. But Dixon started in open-wheel cars when he was 14, and he’s been in Indycars for the past 20 years.

So maybe Johnson won’t make it to the top of this particular mountain. And I’m fine with that. IndyCar is the pinnacle of open-wheel racing in North America. It’s SUPPOSED to be difficult. Although Formula 1 refugee Romain Grosjean has shown good pace, he stands a lowly 16th in the championship – Johnson is 28th – and Grosjean’s erstwhile teammate at Haas, Kevin Magnussen, didn’t make much of an impression during a one-off drive at Road America.

For me, at least, Johnson’s struggles are the best evidence out there of how hard it is to run up front – or even mid-pack – in an Indy car. It’s like seeing a pitcher swing impotently as a 100-mile-per-hour fastball flashes past him. The vivid spectacle of failure reminds us why those guys get paid to hit baseballs and drive race cars while we watch them on the telly.