It’s always been nailed on for me. Chris Amon: the best never to win a World Championship Grand Prix. 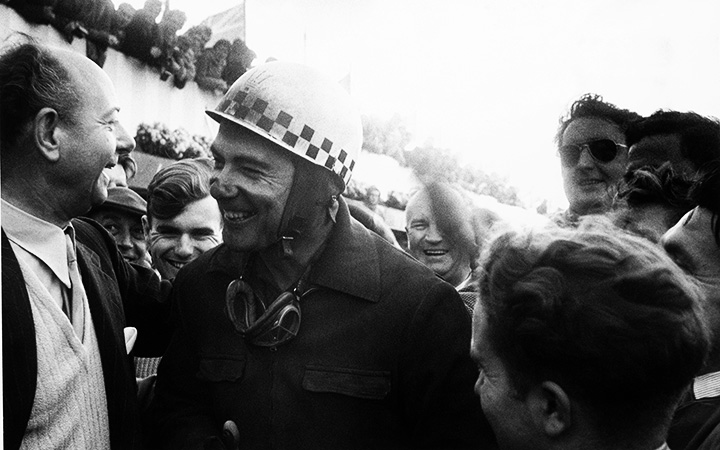 But then something within the Twittersphere set me wondering and wandering: from Amon to Behra. 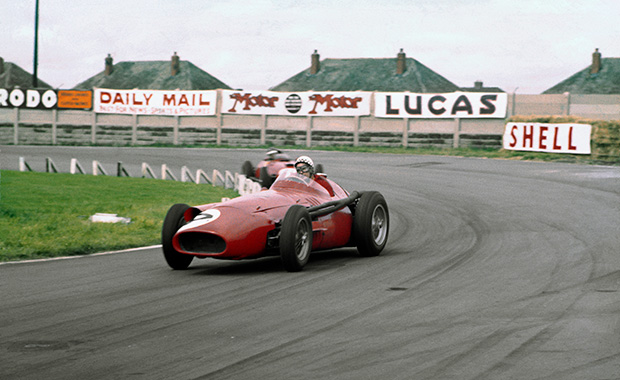 At Aintree for the British Grand Prix

It had been pointed out that the nuggety Niçois won no fewer than 10 non-championship Formula 1 races. (Plus two Formula 2 victories for Gordini in 1952.)

The second of the latter type was achieved at Reims against the supposedly insuperable Ferrari 500 of Alberto Ascari. This tigerish performance set the scene for Behra’s four-wheeled career.

Aged 31 – whereas Amon was the original teenage sensation – he had already won four successive French 500cc titles on two wheels (on Moto Guzzis).

In 1954, still with financially hamstrung Gordini, he won at Pau, another defeat of a works Ferrari, and Cadours.

But it’s 1957, and still with Maserati, when the Behra ‘argument’ begins to make fierce sense. Even though his campaign was interrupted by injury. 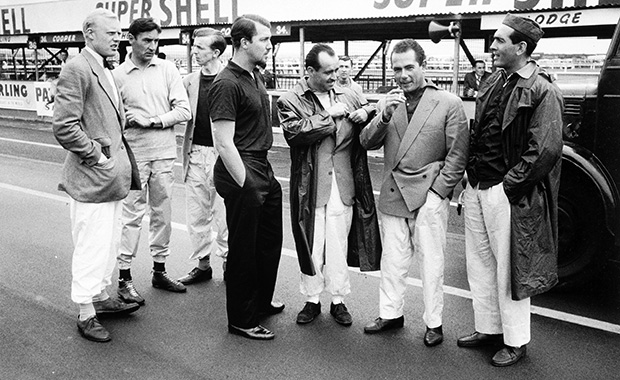 It began in January with a trio of second places in the scorching heat – a motif that season – of Buenos Aires.

At the wheel of a brand new lightweight 250F, he led the opening World Championship encounter for seven laps before giving best to team leader Juan Fangio.

That overall pattern was repeated a fortnight later in the Buenos Aires GP – the first of 10 non-championship races that season – though Behra beat a cagey Fangio in the second heat.

Betwixt, at the terrifying Costanera road circuit, he shared a 300S with local star and sporting all-rounder Carlos Menditéguy – and ultimately a redeployed Stirling Moss – in the first round of the World Sports Car Championship.

At the second, the Sebring 12 Hours in March, Fangio ‘stroked’ to victory in Maserati’s thunderous 450S ‘Bazooka’ and delightedly handed the laurel wreath to his co-driver: Behra had recorded the fastest lap and done his fair share. 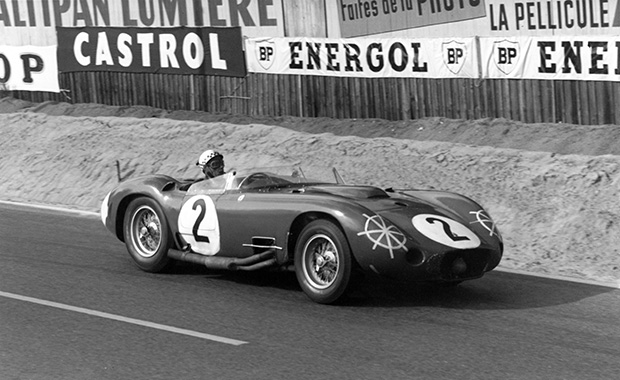 In Pau, however, he was unchallenged – the British teams were at Goodwood contesting the Glover Trophy – and won by two laps in 110.

That should have been perfect practice for the forthcoming Monaco GP. Unfortunately, he crashed on the Friday before the Mille Miglia and broke a wrist, an injury that caused him to skip it and also the Nürburgring 1000km.

Having assessed his fitness with a class-winning third overall in an AC-Bristol at Monthléry’s Coupe du Salon, Behra returned to the big time at Le Mans in June – and was leading when a broken gaiter clip punctured the fuel tank.

Co-driver André Simon, who had just begun his first stint in the 450S at the time of this unfortunate event, suffered a severe verbal roasting from Behra before he could get a word in edgeways.

There was no time to stew, however. July was hectic. 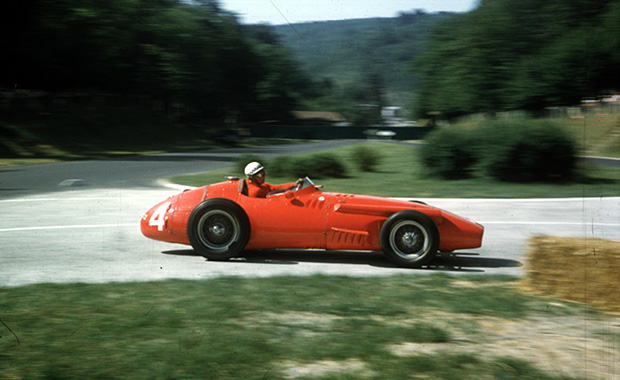 Fangio and Behra provided the best racing of the French GP at Rouen. During practice. The latter’s resistance was broken when Maserati’s number one overtook him around the outside at the first downhill right after the pits.

It’s no disgrace that he was rarely a match for Fangio.

Gassed by a split exhaust and showered in hot oil, even Behra – “who never gives up despite personal suffering”, according to Denis Jenkinson – deemed it wiser to park by the start/finish line and coast across it to claim a distant sixth place, after Fangio had taken the chequer. 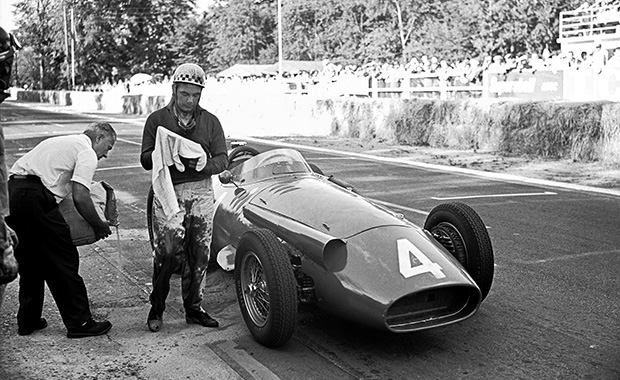 Covered in oil at Rouen

To all intents and purposes there were two French GPs that year.

Having been usurped by Rouen for national honours, Reims staged a 500km F1 race the following weekend. Behra and Fangio again diced, in the race this time, and the latter made a rare mistake, locking up at Thillois hairpin and hitting a wall.

Behra set another fastest lap but could do nothing about the winner, an inspired Luigi Musso in an old-spec Lancia-Ferrari.

Aintree was next, for the British GP. Fangio was off colour and it was left to Behra to take the fight to the increasingly potent Vanwalls. He split them in practice and led for more than 40 laps once Moss had ‘retired’ with a misfire.

The latter was charging through the field in team-mate Tony Brooks’ car when Behra showered metal over the road – the team said exploded clutch, the doubters reckoned blown engine.

The Frenchman had held more than a minute’s advantage over Moss at half-distance. Twenty more laps and this had been reduced to 36 seconds. It seems likely that the Maser was already hobbled and that the inspired Englishman might have caught it in any case. 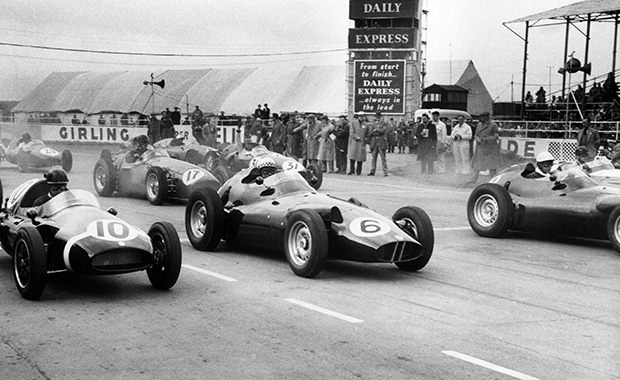 In BRM #6 at Silverstone

Perhaps only the perpetually motive Moss rivalled Behra’s need for speed. With Maserati too busy preparing for the German GP, ‘Jeannot’ offered his services to BRM, the poor man’s Vanwall, for the Caen GP.

He won with some comfort, once he’d stopped his seat from flexing unhelpfully and also doubled the amount of caster angle, to give this beleaguered team hope for the future.

The German GP was another Fangio masterclass and Behra, who also started on light tanks, finished a surprisingly anonymous sixth.

Yet it was to him – and Moss – that Maserati looked to in the World Sports Car Championship. (Fangio, 46, was content to pick his moments.)

Behra drove 116 of the 145 laps, no easy feat in the 450S on narrow and bumpy roads, to win the six-hour Swedish GP at Rabelov as Moss divided his time between both works cars; Harry Schell was the other driver. 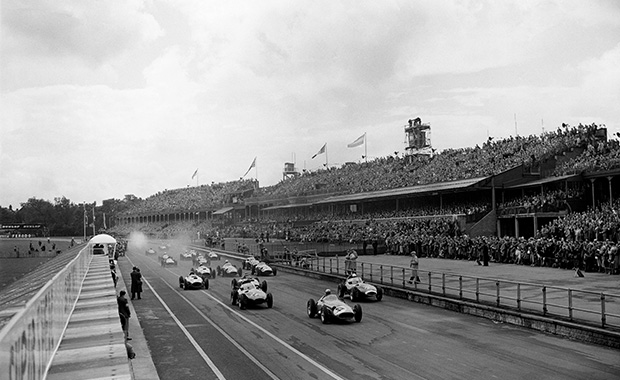 Taking the lead at Aintree

When a few weeks later it was confirmed that this championship would indeed be decided in Caracas in November, Maserati was handed a second chance to finally beat its neighbour Ferrari to this coveted title.

Before then, however, Behra would race at Pescara, for once a World Championship round, Monza, Silverstone (again for BRM), at the walled circuit of Modena and in Morocco.

At Pescara, he withdrew with oil smearing his 250F’s shapely tail. At Monza, he ragged the sonorous but ultimately disappointing V12 version of the 250F without mercy, leading for a couple of laps and providing support for Fangio versus Vanwall’s phalanx, before it overheated. 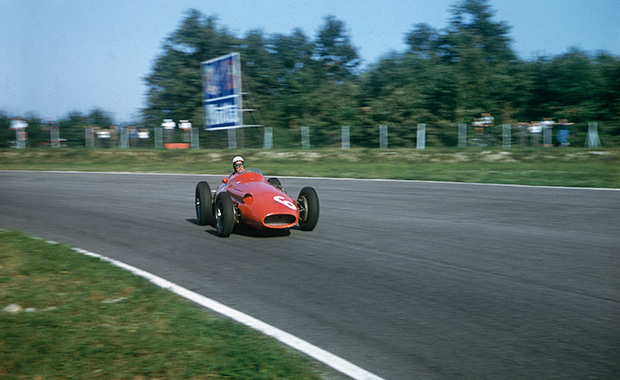 In the six-cylinder 250F during practice at Monza

The next three brought victories.

His BRM was beaten ominously to pole by the rear-engined F2 Cooper-Climax of Brooks but won its heat and the final of the BRDC International Trophy when the latter stripped its cwp at the start.

At Modena, Behra’s works 250F proved too much for the front-engined F2 Ferrari Dinos of Musso and Peter Collins and won both heats by 20 seconds.

Well, there, he won what to all intents and purposes was another full-blown ‘World Championship’ encounter. (Sand-strewn Aïn-Diab would be included the following year and host a dramatic and tragic finale.)

Behra was helped by the absence of Moss, who returned home after practice because of a bout of Asian Flu, and the similarly sapping symptoms endured by Fangio and Hawthorn. But, without a shadow of doubt, the feisty Frenchman proved with this measured, flawless performance that he possessed all the facets necessary to win at the highest level. 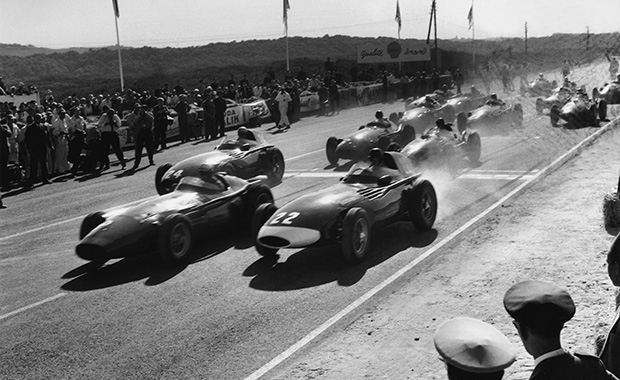 Leading Brooks and Lewis-Evans away at Aïn-Diab

He shared more with Amon than a memorable crash helmet.

Amon won two non-championship F1 (bolstered by Formula 5000s) races – the 1970 International Trophy with March and the 1971 Argentine GP with Matra – by which time there were fewer to win.

He also won half a dozen Tasman rounds when that Down Under series was at its Jim Clark/Jochen Rindt/Team Lotus pomp. 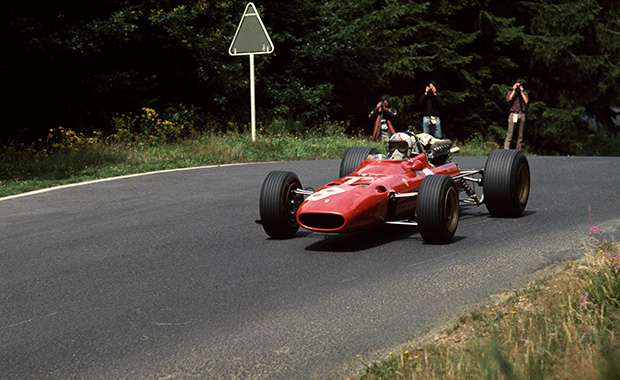 But Behra carved another notch on his non-championship bedpost when he beat Ferrari team-mate Brooks at the 1959 Aintree 200.

It’s still Amon for me. Though that nail has definitely been loosened.

PS The leading 450S caught fire while refueling in Caracas, and Behra, brave and impetuous, beat out the flames with his hands. That was the end of his 1957.