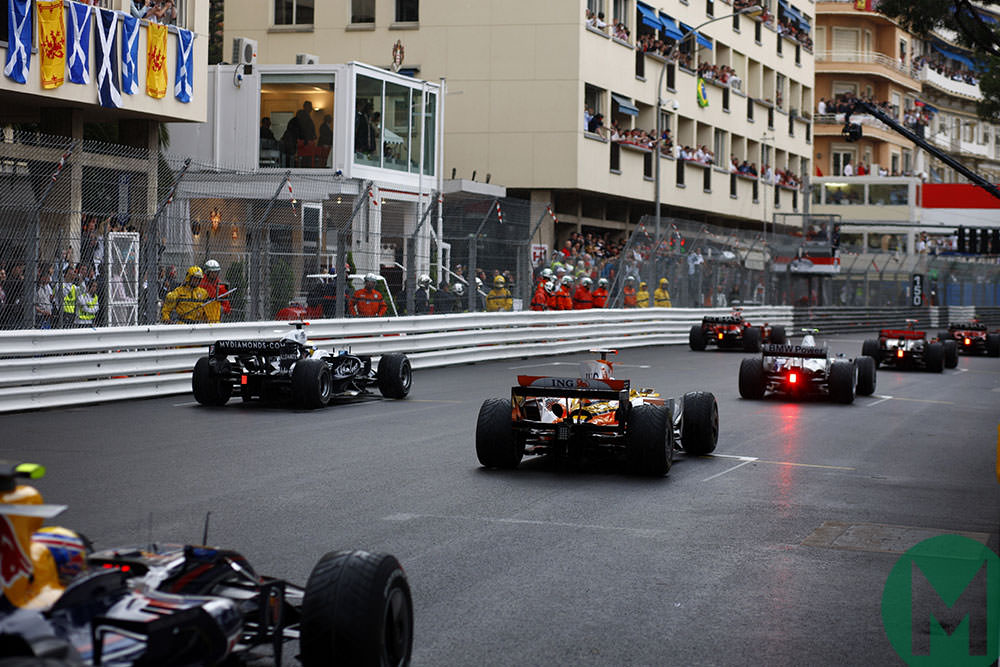 1979 Amédée Gordini died on this day in 1979. “Le Sorcier” raced at Le Mans on four occasions before World War II, but it was as a constructor that he was best known. His under-funded team rarely challenged the leading marques when it raced in the world championship during the early to mid-1950s but Jean Behra finished third in the 1952 Swiss Grand Prix and Robert Manzon repeated that result at Spa-Francorchamps later that year.

1986 Nigel Mansell (Williams) recovered from a spin at the Bus Stop chicane to win the Belgian Grand Prix at Spa-Francorchamps. Gerhard Berger’s Benetton triggered a first corner crash and Nelson Piquet established a clear lead before his engine failed. Mansell then passed Ayrton Senna in the pitstops before easing to victory by nearly 20 seconds. Stefan Johansson and Michele Alboreto finished 3-4 for Ferrari.

2008 Light rain greeted the start of the Monaco Grand Prix 10 years ago and appeared to have ended Lewis Hamilton’s chances when he clipped the barrier on lap five. But he changed the punctured tyre and refuelled before a timely safety car reduced his disadvantage. He took the lead, when Felipe Massa stopped, and then led to the finish. Massa finished third after being passed by Robert Kubica in the second round of pitstops. Adrian Sutil lost a deserved fourth-place when his Force India was hit by Kimi Räikkönen’s out-of-control Ferrari at the chicane with 10 laps to go.

1955 Just four days after crashing into Monaco’s harbour without injury, Alberto Ascari was killed while testing at Monza in preparation for the Supercortemaggiore. Just 36-years-old, as his father had been when he died, the younger Ascari had dominated the world championship during the Formula 2 years, winning the title in 1952 and 1953 and he remains Italy’s most recent world champion.

1942 British Formula 1 driver, and heir to the beer company, Piers Courage was born on May 27. He started 28 Grands Prix for the likes of Reg Parnell and Frank Williams and finished second in Monaco and the United States in 1969. He was eighth in that year’s World Championship when driving Williams’s Brabham BT26A-Ford. A race winner in Formula 2 and the Tasman Cup, he was killed at the 1970 Dutch Grand Prix when his De Tomaso 505/38-Ford crashed and caught fire.

1951 Juan Manuel Fangio (Alfa Romeo) won the Swiss Grand Prix in heavy rain at the start of his first successful championship campaign. It was a dominant display by the pole winner who beat Piero Taruffi’s Ferrari by 55.24sec, the silver-haired Italian having passed Giuseppe Farina’s Alfa with a lap to go. Stirling Moss finished eighth on his championship debut for HWM. 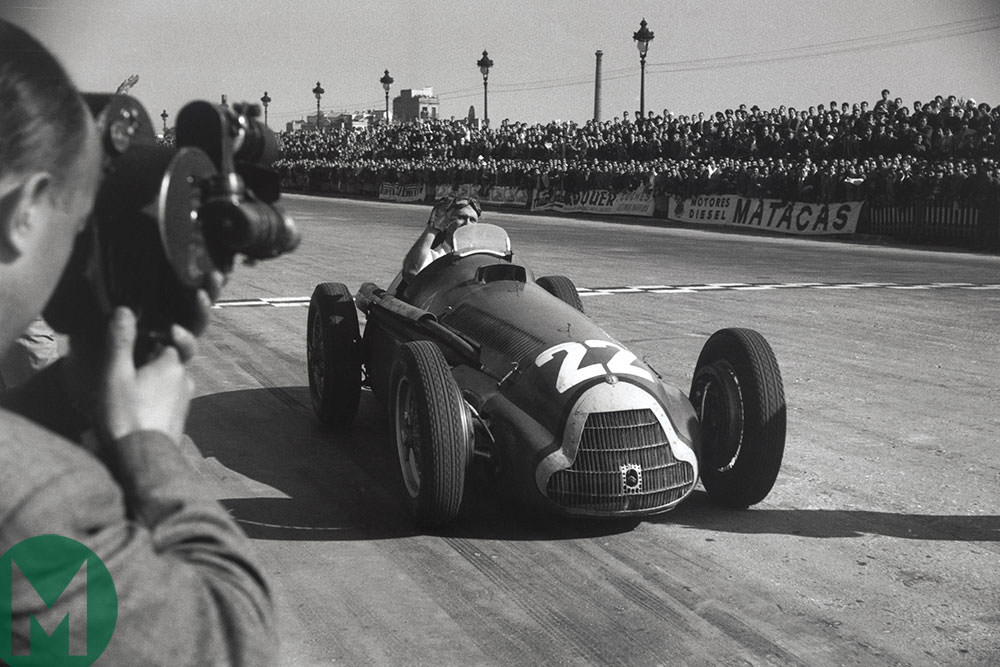 1910 1934 Monaco Grand Prix and Avusrennen winner Guy Moll was born in Algeria on this day in 1910. The protégé of Marcel Lehoux only raced in Europe for a couple of seasons but he impressed sufficiently for Enzo Ferrari to observe that “he was the only driver, together with Moss, able to be placed alongside Tazio Nuvolari.” Moll’s Bugatti T51 was second in the snow at Pau in 1933 and he signed to drive an Alfa Romeo “P3” for Scuderia Ferrari in 1934. He inherited victory at Monte Carlo and beat the new Auto Unions in a streamlined car at Avus. The 24-year-old was battling Luigi Fagioli’s Mercedes-Benz for the lead at Pescara when he crashed with fatal consequences in 1934.

1992 McLaren chose Monte Carlo’s Sporting Club to launch its new road car on this day in 1992. Gordon Murray and Peter Stevens designed the McLaren F1 using Grand Prix technology to create “the world’s most desirable sports car.” The 240mph three-seater was instantly a classic and was used three years later to win the Le Mans 24 Hours.

1939 Al Unser Sr was born in Albuquerque on this day 79 years ago. The youngest son of Jerry Unser made his debut in what is now known as IndyCar at Milwaukee in 1964 with the first of 27 starts at Indianapolis following a year later. He shares the distinction of being a four-time winner of that great race with A.J.Foyt and Rick Mears. Also a three-time national champion (1970, 1983 and 1985), both brother (Bobby) and son (“Little Al”) are multiple Indy 500 winners and IndyCar/Champ Car champions.

1960 Stirling Moss won the Monaco Grand Prix to score the first victory for a Lotus chassis, albeit entered by Rob Walker. Jo Bonnier’s BRM led the opening 17 laps before being passed by Moss before rain handed the advantage to reigning champion Jack Brabham’s Cooper. Brabham spun and Moss relinquished the subsequent lead when he stopped to reattached a loose wire. He then reeled Bonnier in and re-took the lead with a third of the race to go. Bonnier broke his suspension and just four cars were running at one stage so Bonnier and others pushed their broken machines across the line to be classified.

1977 Janet Guthrie became the first woman to start the Indianapolis 500 in 1977. Her Vollstedt-entered Lightning retired after 27 laps when the Offenhauser engine blew-up. This was AJ Foyt’s day for he finally became the race’s first four-time winner ten years after his previous success. Johnny Rutherford’s works McLaren and Clay Regazzoni’s Theodore Racing McLaren were also early casualties and it was Tom Sneva who finished second for Penske Racing.

1994 Formula 1 was still in shock following the accidents of the past month when the circus arrived in Spain. The FIA reacted to the tragedies with rule changes and by inserting a temporary tyre chicane on the Circuit de Barcelona-Catalunya to slow the cars. Damon Hill scored a morale-boosting victory for Williams over Michael Schumacher. The championship leader still managed to come second despite completing his second pitstop and the rest of the race stuck in fifth. Mika Häkkinen lost the lead when his Peugeot engine blew up and David Coulthard retired on his debut for Williams. 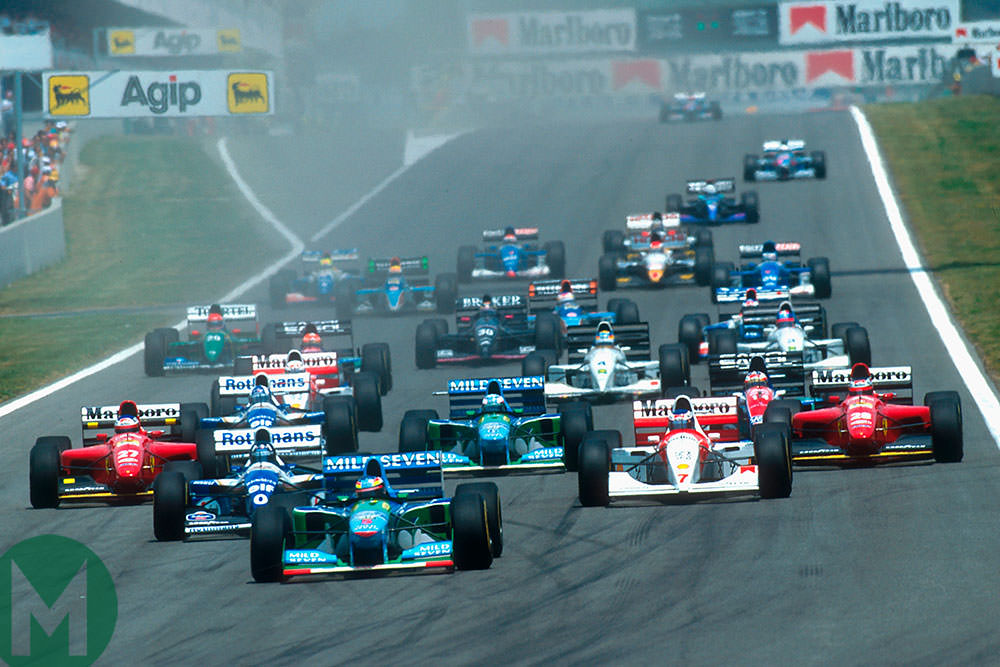 1965 Graham Hill won the Monaco Grand Prix for the third year in a row with Jim Clark and Dan Gurney absent at Indianapolis. Hill was delayed when he left the road at the chicane avoiding a backmarker and BRM team-mate and leader Jackie Stewart also spun. Jack Brabham’s engine failed before Hill passed both Ferraris to win. Lorenzo Bandini was second for Ferrari with the recovering Stewart third. Paul Hawkins crashed into the harbour 10 years after Alberto Ascari’s famous dip in the Mediterranean.

1966 Graham Hill’s John Mecom Lola beat 1965 winner Jim Clark to victory at the 1966 Indianapolis 500. Both drivers headed to victory lane as Colin Chapman maintained that Clark was a lap ahead but Hill was confirmed as the winner. Mecom team-mate Jackie Stewart was on course for victory until fading oil pressure ended his day with just ten laps to go. The field had been decimated by an accident on the opening lap that eliminated 12 cars. Mario Andretti led on the restart before retiring and Clark twice spun in turn four as he battled Lloyd Ruby at the front of the field. Ruby lost 10 laps in the pits and damaged suspension eventually slowed Clark.

1993 World champion Nigel Mansell defected to Champ Cars in 1993 and he almost won the Indianapolis 500 at the first attempt. His Newman-Haas Lola-Ford was leading when Lyn St James broke down with 24 laps to go. Racing on an oval first the time, Mansell was outfoxed by Emerson Fittipaldi and Arie Luyendyk on the restart and he trailed in third position. It was Fittipaldi’s second win at Indianapolis and Penske Racing’s record ninth success. 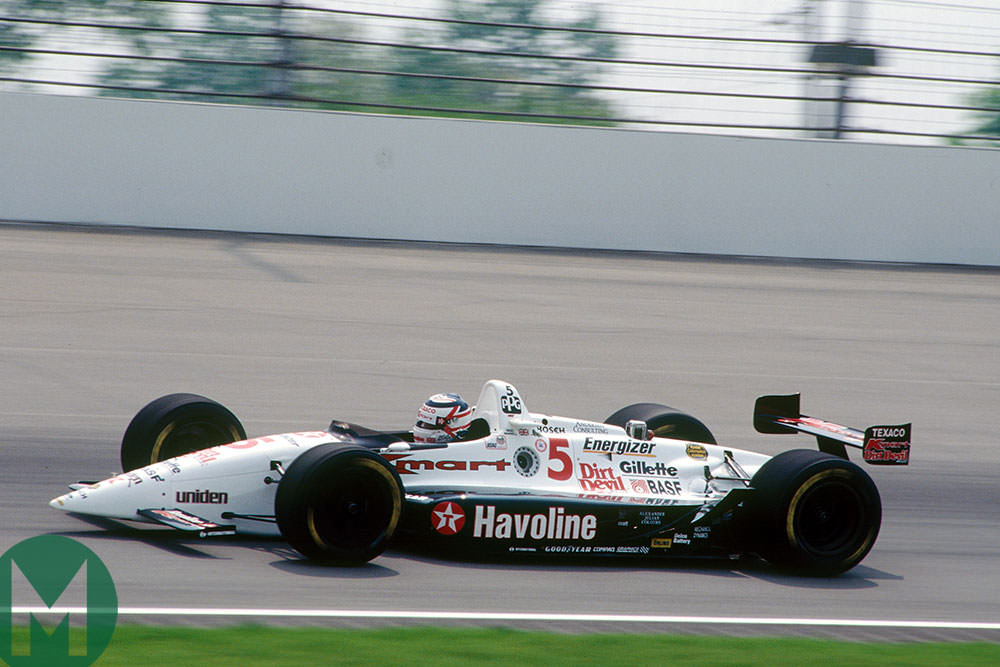 1959 Jo Bonnier won the 1959 Dutch Grand Prix at Zandvoort, his only GP victory and a first success for BRM. Bonnier started from pole position and diced with the works Coopers of Jack Brabham and Masten Gregory before they were slowed by gear selection issues. The Coopers finished second and third respectively. Stirling Moss passed Bonnier for the lead on lap 60 but retired just three laps later.

1959 Erratic Italian Grand Prix driver Andrea de Cesaris was born in Rome 59 years ago. He started 208 Formula 1 races and was most competitive when driving for Alfa Romeo. He qualified on pole position and led at Long Beach in 1982 and was denied victory by a botched pitstop and subsequent engine failure at Spa-Francorchamps in 1983. Second in that year’s German and South African GPs were his best results but de Cesaris’ accidents left a lasting legacy.

1965 Jim Clark dominated the 1965 Indianapolis 500 by leading all-but 11 laps on the way to a historic victory for Lotus and Ford. Clark was the first foreign national to win America’s greatest race since Dario Resta’s victory in 1916. He was the first driver to average over 150mph for the 500 miles and he beat Parnelli Jones’ year-old Lotus-Ford by almost two minutes. Rookie Mario Andretti finished third as Ford engines filled the top four places to end Offenhauser’s unbroken run of success that dated back to 1947.

1981 Gilles Villeneuve’s turbocharged Ferrari passed Alan Jones (Williams) with four laps to go to win the Monaco Grand Prix in 1981. The pole-winning Brabham of Nelson Piquet initially led but he crashed at Tabac while being pressured by Jones. The Australian appeared in control until fuel vaporisation sent him to the pits. The DFV engine still did not run cleanly when he returned six seconds ahead of Villeneuve and Jones could not withstand the Canadian’s late charge. The race, which was delayed by a flood in the tunnel, was Ferrari’s first victory since 1979.

1992 Nigel Mansell’s Williams-Renault began 1992 in dominant fashion, winning the first five races from pole position – but that successful run ended in Monaco. The Englishman was again quickest in qualifying and he led the opening 70 laps before pitting to change a suspected punctured tyre. He returned to the track immediately behind the McLaren of Ayrton Senna and try as he might, Mansell could not pass the McLaren in the eight laps that remained. The Brazilian won by 0.215sec to equal Graham Hill’s record of five Monaco GP wins.