Mike Doodson reckoned Nelson Piquet looked “a little haggard” at Goodwood, but I thought the three-time World Champion looked pretty good on his 61 years when he made a star appearance at the Festival of Speed this summer past. There were hints of grey around the temples and a few extra lines around the eyes, but life has been good to the Brazilian since his racing career wound up 20 years ago and it shows. 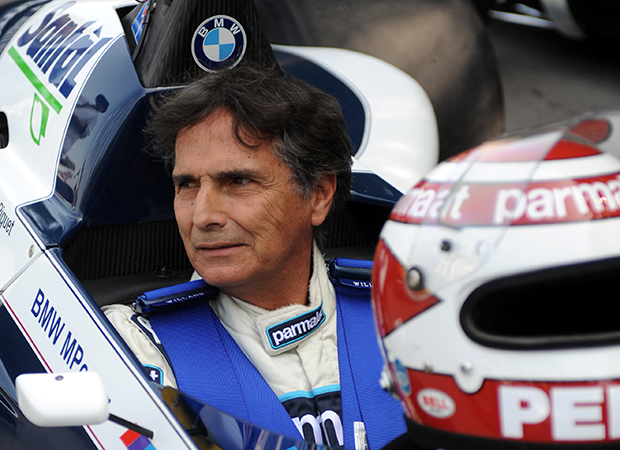 Piquet returned to Goodwood at the behest of BMW, which was marking the 30th anniversary of its one and only Formula 1 World Championship success. Back in 1983, Gordon Murray and his small design team at Brabham endured four months of grinding all-nighters to produce the dart-like BT52, following the FIA’s shock decision the previous November to overhaul its rulebook. Ground-effect aero suction was out, as was Murray’s well-advanced BT51 – and the flat-bottomed era of Formula 1 began.

How Murray created one of the most iconic – and stunningly beautiful – F1 cars from a starting point of bleak despair has gone into legend, and indeed it’s a story we revisited in the May issue this year. The needle-nosed ‘dragster’ was mated to BMW’s potent production-based four-cylinder turbo, and the combination proved the class act in a botched year when other teams resorted to B, C and even D versions of hurried designs.

A win for Piquet and the straight-out-of-the-box BT52 in Rio offered Murray and his team instant gratification, although a mixture of unreliability and misfortune meant they didn’t win again until September. But a late run of success – boosted (literally) by a witch’s brew of WWII rocket fuel – allowed Piquet and Brabham to snatch the title from under the Gallic noses of Alain Prost, Renault and a furious Elf. Rumblings of illegality still tremor to this day, but the results stand, as does the second of Piquet’s three world titles.

The German giant has every reason to be proud of its 1983 achievement, especially as it failed to repeat such success as an engine supplier to Williams between 2000 and 2005, and during its subsequent (short) spell as a standalone team. 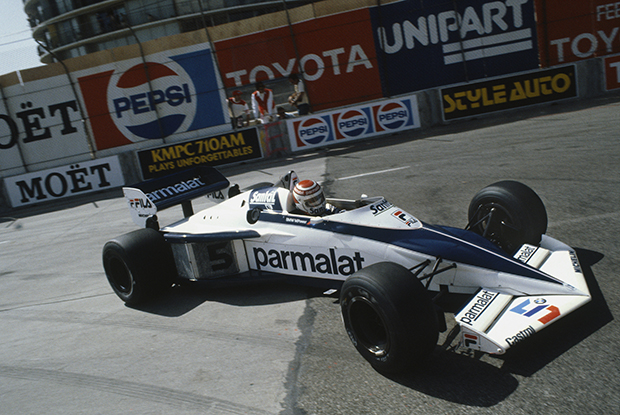 Thus, as we reported in our August issue a few months ago, BMW’s classic division pulled out the stops to restore a BT52 in time for a happy reunion with Piquet at Goodwood this year. And with Nelson so rarely available for interview on this side of the world, we immediately drew a big target on his back.

Doodson was the obvious candidate to pin Nelson down, given that he’d been that rare case of a British journalist who remained close to one of the sport’s most controversial characters, particularly during his ‘dastardly’ period as ‘saintly’ Nigel Mansell’s team-mate at Williams. Nigel Roebuck, incidentally, also got along with Piquet, but would never claim to have been as close to Nelson as ‘Dood’.

Now the question was timing. Mike had already missed the accreditation deadline for the Festival and tracking down Nelson for anything more than a quick word meant we’d need help. Enter BMW UK’s star of a PR man, Martin Harrison.

It was Festival Friday and I’d already met Nelson during our recording of the Festival podcast. As we’d finished I tried to explain to Piquet that Mike was here purposefully to see him – but the Brazilian had looked at me blankly, said “yes” (even though I hadn’t actually asked him a direct question) and wandered off. My pitch could have gone better. 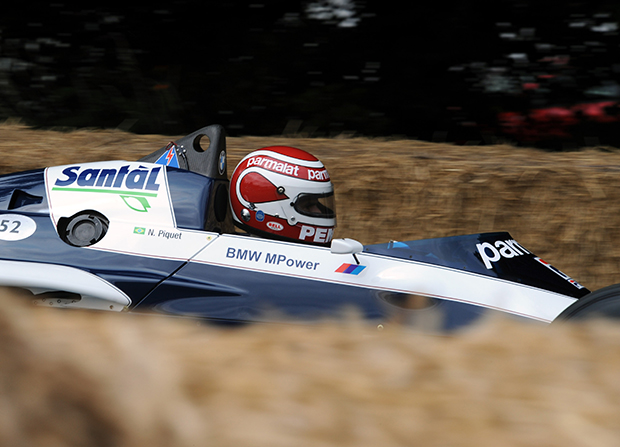 Piquet was now having lunch with his family and friends, so I hurried over to BMW’s stand near the cricket pitch, caught up with Martin and Mike and told them our only hope was to catch the great man now, before he headed off for another run up the hill in the BT52. Together we dashed back to the drivers’ lounge where Nelson had finished eating. He turned around, immediately spotted Mike, cracked that familiar gap-toothed grin, laughed and launched into a barrage of good-natured abuse towards his old friend. From that moment on, I knew the interview was in the bag.

As the busy lounge emptied and drivers headed out for more runs on the hill, Nelson and Mike sat reminiscing for more than an hour, Martin and I hovering close by, earwigging on a conversation over which the veteran journalist was valiantly trying to keep some semblance of control.

Piquet’s scatter-gun and broken-English delivery makes it tricky to hold his attention on one subject for any length of time, but if anyone could make sense of Nelson’s stream of consciousness it was Mike! Sure enough, they parted with handshakes, back slaps and smiles after a happy reunion – and a fresh interview recorded. You can read the result in the December issue, on sale now.

Piquet was always a bit ‘Marmite’ for racing enthusiasts, whatever their nationality, and sure enough this new interview will divide opinion. He dismisses his old Brabham team-mate Riccardo Patrese as a “crying boy”, praises Niki Lauda for what he learnt from him during their time together as team-mates and speaks of his “shock” when Nelson Jr told him about crashing on purpose at Singapore 2008, in the Renault race-fixing controversy that became known as ‘Crashgate’. 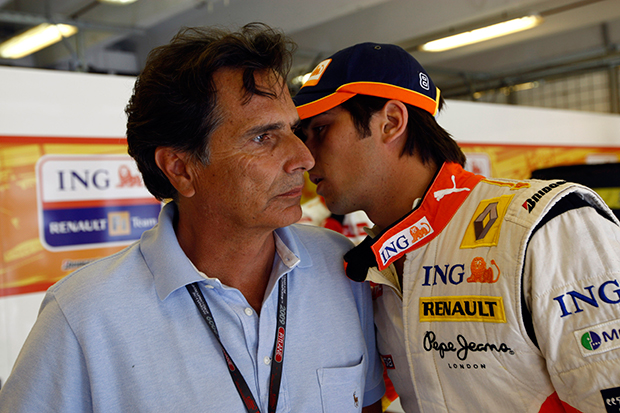 Back in September 2012, Pat Symonds told Motor Sport that Nelson Jr himself had suggested the idea in Singapore. At the time, a fellow editor of a rival magazine accused me of repeating a libel given that the Piquets had won compensation from Renault following the acrimony of a courtcase. He had a point, but I’d felt it was important for Symonds, who was banned from F1 for five years for his part in the affair, to have his say. We heard nothing from neither Renault nor the Piquets following publication of the article.

So now we print Nelson Sr’s version of events. As he states, he wasn’t in Singapore to witness events first-hand, and claims he first discovered the truth a week later when he spoke to his son on the phone.

“I asked him what happened when he shunted the car,” he tells Mike. “[Nelson Jr] said it was all programmed and he had been told to do it. I was quite shocked: ‘How could you do something like that?’ I asked him. He said, ‘Look, you should know what the pressure is like here. They told me that if I wanted to be part of the team, I had to do what they want.”

As we know, the story emerged in 2009 when Renault jettisoned Piquet Jr – and Nelson Sr “went to Max [Mosley] and told him the story”. As he tells Doodson in our interview, “I told Nelson he would never drive in F1 again, and either he could go easy, or we could get some money from Renault. And he said, ‘OK, let’s go and fight’.”

Everything about this story is grubby and unseemly. In truth, no one emerged untarnished one way or another – including Piquet Sr. And certainly no one, including Mike Doodson, would claim Nelson is a saint, this new interview reminding us why on more than one occasion. 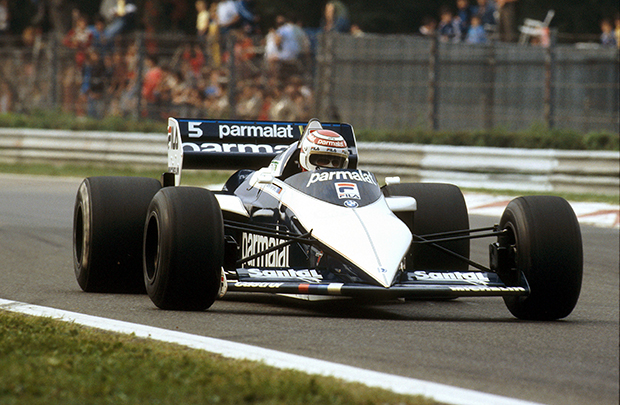 For some, the controversy of ‘Crashgate’ will forever overshadow how Piquet is remembered, despite the fact he cleared his family’s name in court. Whatever, it seems unfair that a three-time World Champion should be defined entirely by an episode that occurred long after he retired.

As a driver, Piquet is often underrated despite his title successes. In motor racing’s ‘Fab Four’ of the 1980s, he was perhaps George Harrison to Alain Prost’s Paul McCartney and Ayrton Senna’s John Lennon (yes, that makes Mansell Ringo!). In recent years, George has received the credit he was long overdue – and now, we believe, it’s Nelson’s turn.

More than anything, this interview reminds us how hard Nelson worked, right from his Formula 3 days, to be a winner. As those who worked closely with him maintain, he was never afraid to put in the hours on car preparation, set-up and testing to give himself the best opportunity to make the most of his blistering speed.

And respect is due for a man who still had the fire to take on the Indy 500 and Le Mans once his F1 career dried up – especially as he suffered the worst injuries of his life when practicing for the former. 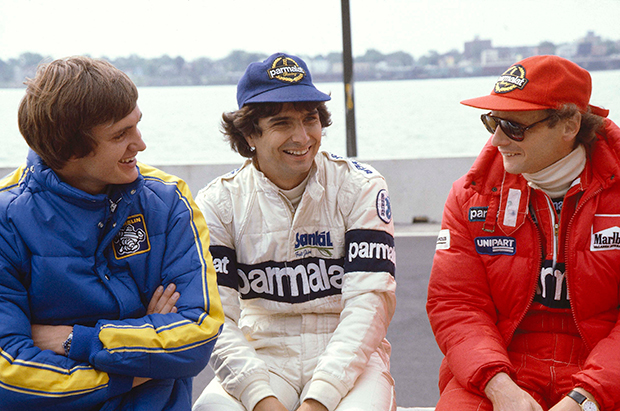 Nothing about Piquet is cut and dried. As you can read in Mike’s article, he can still be obnoxious and crass. He can also be very funny. And perhaps most importantly, among the stream of memories Nelson Piquet also offers some insight into what made him a genuine ‘frontman’ of F1 history.

Just don’t expect him to react if you judge him. When it comes to what you, me or anyone else might think, he couldn’t care less.