A thrilling duel between Max Verstappen and Lewis Hamilton played out from beginning to end, the outcome in the balance throughout. It was surely the best grand prix that has ever been hosted by Paul Ricard, a circuit with a history of somewhat processional races going right back to the inaugural event of 1971. Verstappen’s Red Bull, having surrendered the lead to make a second stop, caught and passed Hamilton’s Mercedes on the penultimate lap – the precise reverse of Barcelona this year or Budapest 2019.

The two title contestants were in a tense duel throughout on a day when graining front left tyres made wear much higher than anticipated and balanced the race delicately on a pivot between one-stop and two.

The outcome swung between them literally from the first corner until half-way through the penultimate lap. Here are each of those phases.

The Red Bull was just a slightly faster car in qualifying, with its spoon rear wing giving greater straightline speed than the Mercedes for once and losing less through the twists of the final sector to the bigger-winged Merc than it gained down the straights. Because Signes is easily flat for every car, a smaller wing actually got you through there quicker – simply because you approached it quicker.

Keeping the soft compound C4 tyres from overheating in that final sector was extremely tricky but the Red Bull managed it better than the Merc, minimising its time loss in sector three where its smaller wing would otherwise have been more costly. 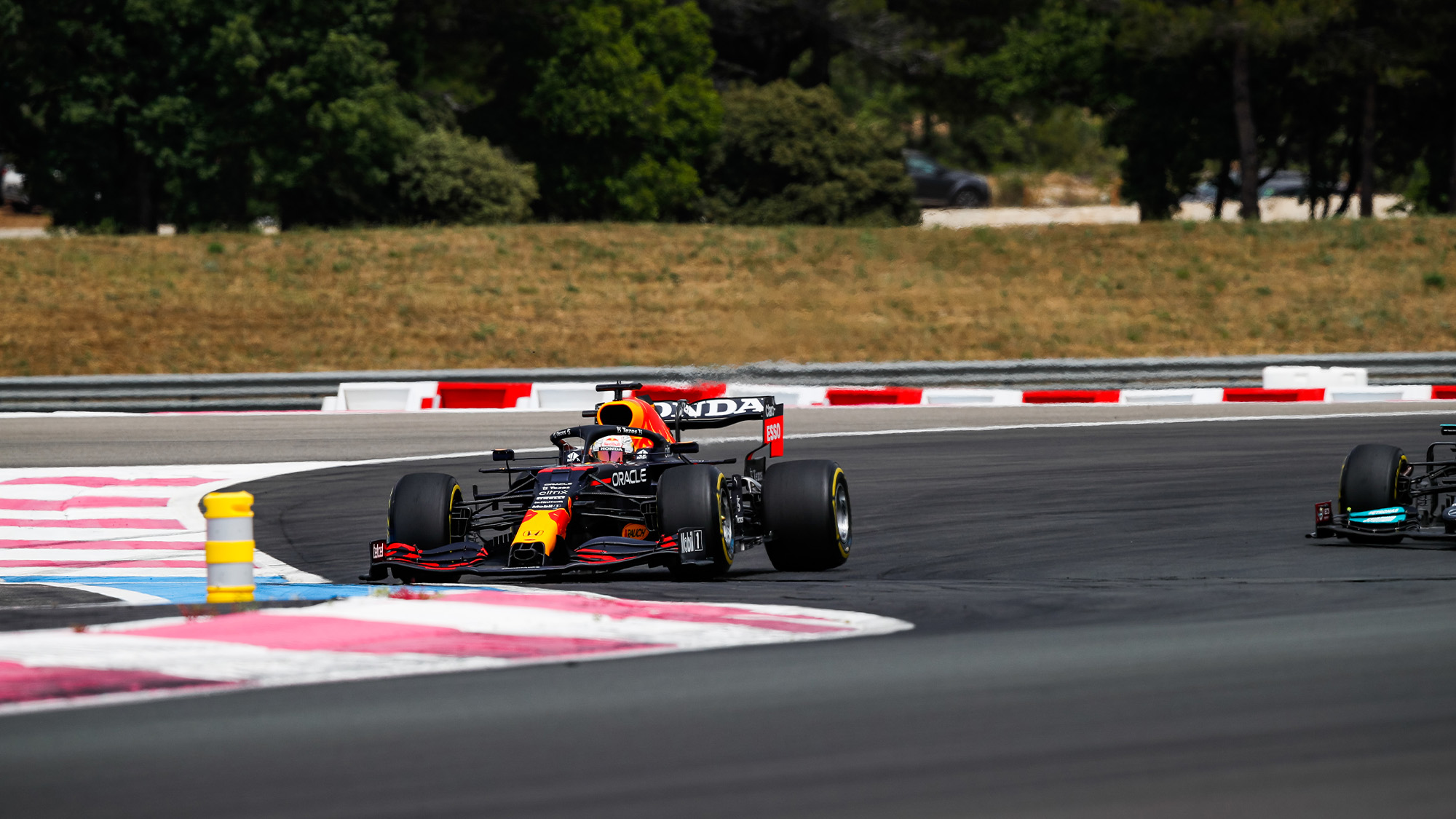 Verstappen heads off track, ceding the lead to Hamilton

So that put Verstappen on pole from Hamilton, with row two occupied by Valtteri Bottas and Sergio Perez. No one would be using the soft tyres in the race though and on the mediums and hards there seemed absolutely no difference in speed between the two cars; it was just achieved in different ways. So the start seemed likely to be decisive.

When Verstappen converted his pole cleanly into the lead as the pack whooshed up to Turn One, it seemed a critical piece of the jigsaw had already slotted in place. But only for a second or so. As he turned in, the combination of skinny wing, cool tyres and a strong tailwind got the Red Bull’s rear sliding wide. Verstappen kept correcting it, with two or three distinct moments until he simply ran out of track and was forced to take to the run-off. He quickly rejoined after driving through the bollards there but Hamilton received his present gratefully.

Once in the lead, Hamilton looked unlikely to surrender it despite Verstappen being in his mirrors. In this era passing between two equally-matched cars tends not to happen. Try too much of that and you’ll just destroy your tyres – and they were delicate here, needed careful treatment.

This wasn’t a function of the new higher pressures dictated by Pirelli after the Baku blow-outs. That concerned the rears but the challenge here was the fronts. Limiting how much the medium tyre grained would determine your stint length on that tyre, before switching to the more durable hard which would get you to the end after one stop. That was the plan of everyone in the top 10, all of whom had graduated from Q2 using the medium.

So Hamilton in clear air was looking after those fronts nicely. Verstappen couldn’t follow too closely without beginning to damage them and as the stint went on, Hamilton began to edge clear. By the 17th lap he had the gap out to over 3sec. Bottas was a similar distance behind Verstappen, while Perez was in a no man’s land of his own, unhappy with the nervous feel of the low-wing car in the gusty conditions. He ran a distant fourth, albeit increasingly far clear of the fierce ‘best-of-the-rest’ battle initially headed by Carlos Sainz’s Ferrari but which would ultimately be dominated by McLaren, on account of the car’s vastly better tyre usage and a terrific thrusting drive from Lando Norris.

There was nothing to suggest that Verstappen’s crucial Turn One error had not gifted Hamilton the win. Verstappen was around, close by, but not a threat. Then there was a gamechanger.

It had been suggested in the battle far behind Perez when early stoppers Charles Leclerc and Daniel Ricciardo made up places by doing so. Leclerc in particular was briefly spectacularly quicker on his new tyres than the old-tyred cars around him. The undercut looked particularly powerful.

With this in mind, Mercedes applied undercut pressure on Verstappen by bringing in Bottas. He was too far back to be able to make up a place so long as Verstappen was brought in next lap – which he was. But it pulled Verstappen off Hamilton’s back and coming in a lap earlier gained Bottas 1.1sec to Verstappen. 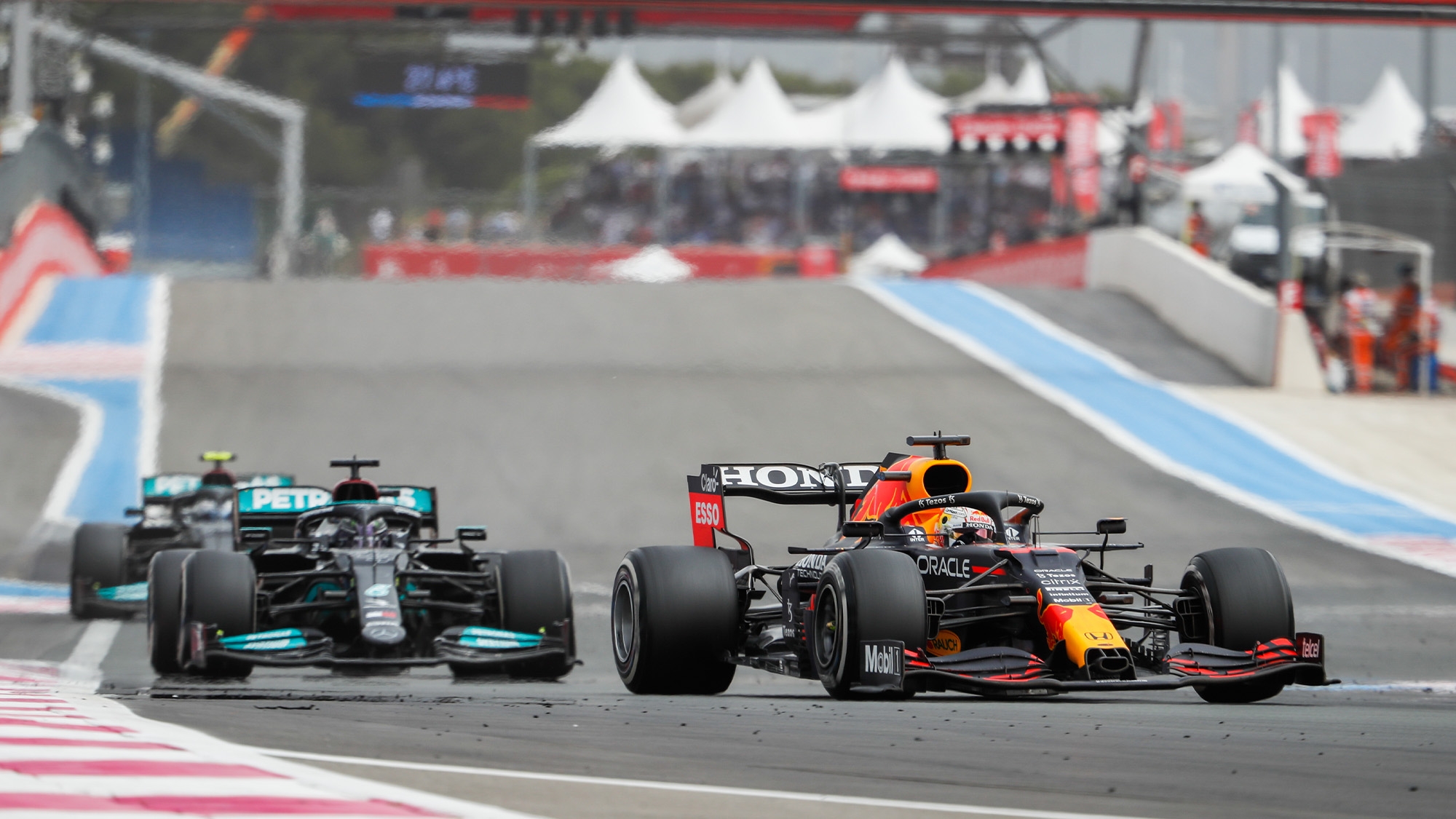 Advantage Verstappen after the first round of stops

Hamilton had been leading Verstappen by 3.1sec on lap 17 and so Mercedes didn’t believe for one moment his position was under threat as they called him in a lap after Verstappen. But Verstappen’s in-lap (which gained him 0.9sec) and in particular his out-lap (which found him 1.8sec over Hamilton’s old-tyred in-lap) on his new hards was spectacular. Add in a smaller pitlane time loss and that 3.1sec was all accounted for and eaten up. The undercut was just way more powerful than Bottas had made it look, as the Merc still can’t quite switch on the hard tyres from cold fast enough. This is not a problem the Red Bull has and Verstappen took explosive advantage of that. His pace around the stops completely wrong-footed Mercedes.

Hamilton was told as he was leaving the pitlane that he’d exit 1.5sec ahead of the Red Bull. Instead, it was alongside him, travelling faster and overtaking as they arrived at Turn One together.

That seemed to be that. Helped by how quickly the Red Bull could fire up its tyres, Verstappen had brilliantly overturned the Turn One error to put himself back in command. On the durable hard compound and no further stops expected, the victory seemed to have been rescued.

Hamilton was giving it everything at the start of the second stint, putting Verstappen under as much pressure as he could. If there were to be no more stops and these tyres could make it to the end, then let’s make Max work for it, try to get him to overwork the tyre.

“We were fighting the whole race. I think it will be like this for the rest of the season.”

Verstappen was forced to respond and before much longer both were reporting back that the tyres were not liking it. “We can’t get to the end like this,” radioed Verstappen, a message that was passed onto Hamilton by his race engineer. “I agree,” replied Hamilton. “Let’s make sure we undercut them.”

Bottas had earlier been urging the team to consider two-stopping too. But it was complicated. Hamilton wanted to do what they’d done to Verstappen at Barcelona this year and Hungary in 2019: make a second stop to get onto fresh rubber with which to catch and pass before the end. But there was a crucial difference this time: Perez was in the way. Stopping again would mean having to get past Sergio before getting to Verstappen. On delicate medium tyres prone to graining. 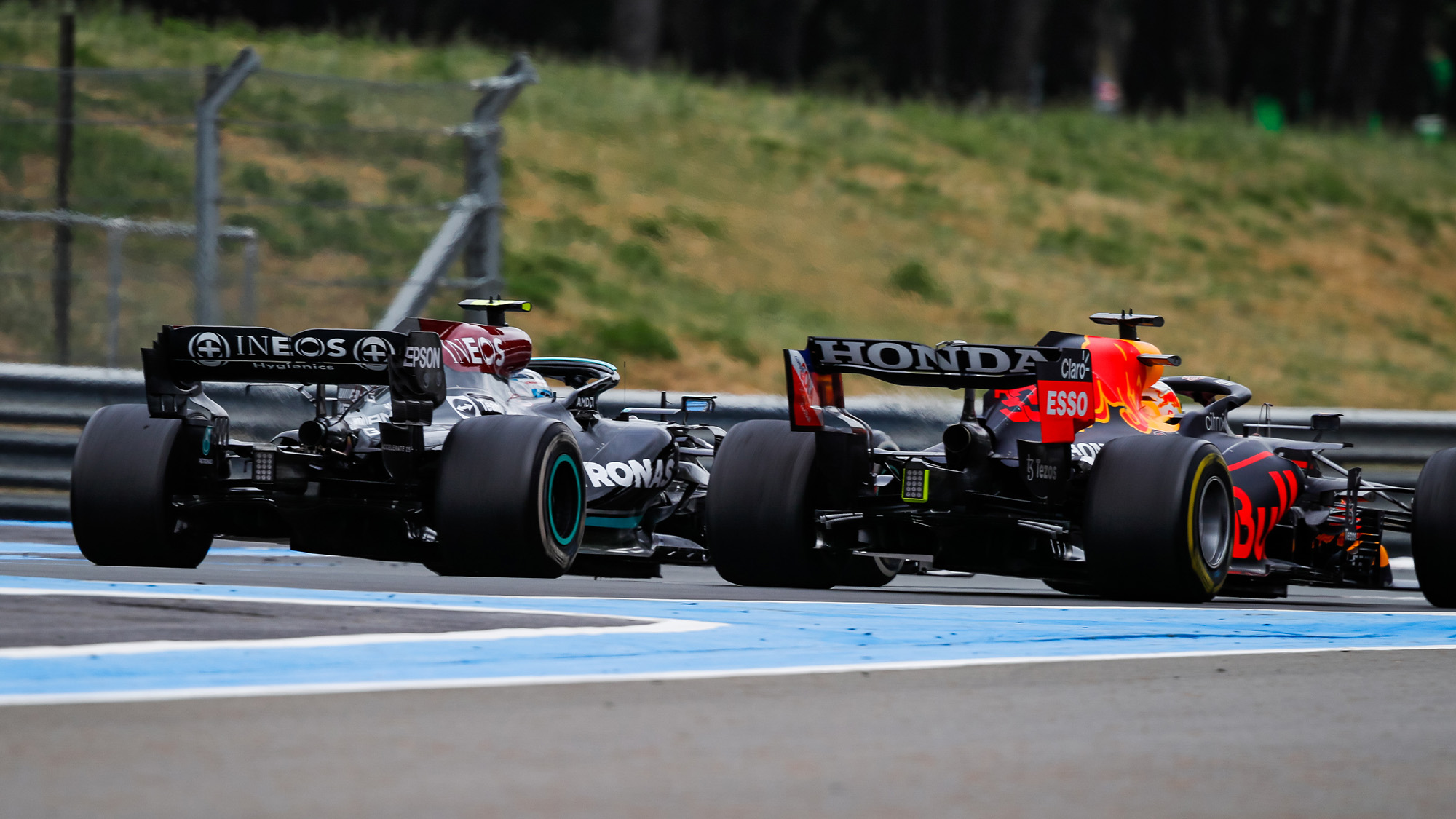 Past Bottas, with only Hamilton up the road

It was still being debated when Verstappen and Red Bull took the decision out of their hands – by pitting from the lead after just 14 laps of the second stint. It was brave to surrender a lead like that, giving Verstappen just 20 laps to make up 18sec. It defined Hamilton’s remaining role as a Bahrain-like attempt at conserving the rubber, but feeling like a sitting duck.

It was that way at first as Verstappen was initially 2sec a lap faster – a margin that got him quickly past Bottas. But then Verstappen’s fronts began to grain, just as before and for two or three laps it looked like Hamilton might pull this off.

Hamilton’s front tyres finally gave up their grip and temperatures with five laps to go – and suddenly Verstappen’s charge was back on. Down came the gap and the move, when it came, down the inside of the Mistral chicane on the penultimate lap, was clean and decisive. Hamilton had nothing left with which to fight him.

A few laps earlier Perez had used his seven-lap newer tyres to take third place from an angry Bottas, frustrated at not being listened to about his calls for a strategy switch.

“As you could see, the whole race we were fighting each other,” said a thrilled and obviously deeply satisfied Verstappen after a spectacular performance, “so I think it will be like this for the rest of the season.”