London’s new Formula E circuit proved that buildings need not prove an obstacle to racing, but organisers have been urged to look at modifying the track before next year’s event, following an incident-filled weekend that saw several of the leading championship contenders involved in crashes.

Ahead of the race, several prominent drivers warned of the carnage which eventually unfolded, with Robert Frijns saying the weekend was set to be a “shuntfest.”

There were questions over the narrow and technical hairpins, as well as the short length of the straights.

Race 1 saw an opening lap coming together which eliminated championship leader Sam Bird and fellow British driver Alexander Sims, as well as the two Audis colliding with each other, with Lucas Di Grassi also connecting with the Dragon Penkse of Sérgio Sette Câmara.

Absolutely loving this ‘box of parts’ behind the FIA garage from that race 😂 Sad they’re all too big to fit on the train home!

Saturday was relatively civilised compared to Sunday’s Race 2, which saw an out-of-control Oliver Rowland take out race leader Stoffel Vandoorne, André Lotterer feed António Félix Da Costa into the pit straight barrier, Rene Rast break his suspension after ploughing into the side of Sébastien Buemi plus Bird then having another incident as he and Venturi’s Norman Nato went into the wall together.

“No,” was Robin Frijns firm answer when asked if he liked the new ExCeL centre circuit, before elaborating: “Because I like to actually have overtaking opportunities. I think it’s a tiny and very technical track. I enjoy driving it alone, but I prefer tracks where you can overtake. It’s going to be a shuntfest, for sure.” 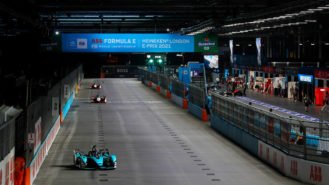 “It’s fun, it’s a cool track,” the DS Techeetah driver said. “Just some hairpins are way too narrow. I think it’s gonna be near Mission Impossible to overtake. I think Spark [the Formula E car manufacturer] are going to be very happy,  [they will ] make a lot of money [as a result of the damage].”

FE did double the length of attack mode from four minutes to eight in an attempt to help overtaking, but 2016-2017 FE champion Lucas Di Grassi highlighted further the alterations he would like to see, as well as echoing some of his rivals’ thoughts.

“I like it,” he said. “The only thing I would change is to make the straights longer and wider or [give more] control [over] the energy.”

The ExCeL centre track was noted for being the first internationally recognised race that goes both inside and outside a building. Much was made of the challenge this presented to drivers, particularly with regards to car set-up if the event was wet outside but dry inside – which it was for Saturday practice and qualifying.

“What’s tricky is not setting-up the car, but [using] your brain,” Di Grassi explained. “You go from one corner which has like 20-30% more grip than the next one. So you need to be very focused and try to understand what the grip is. This was a good challenge.”