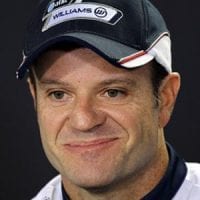 Raised within a car crash of Interlagos, the evergreen and popular Rubens Barrichello is a multiple Grand Prix winner who almost snatched the 2009 Formula 1 World Championship.

Successful at home in karting, Barrichello took the well-worn path to Europe to further his career. It was 1990 when Barrichello emerged as European Formula Opel Champion for Draco Racing. He graduated to British Formula 3 for the following season and his West Surrey Racing Ralt RT35-Mugen won four times to beat David Coulthard to the title at his first attempt.

Formula 3000 in 1992 was next and the Brazilian starred in Il Barone Rampante’s Reynard 92D. He did not win a race but he was only out of the points when he crashed at Enna-Pergusa. Twice second with Judd-power, he switched to a Cosworth engine to clinch third in the championship.

Formula 1 with Jordan and Stewart

The 20-year-old “Rubinho” signed to drive a Jordan 193-Hart in the 1993 F1 World Championship, becoming sixth youngest GP driver at the time when he made his debut in South Africa. He soon proved worthy of his place on the grid by starring in the wet at Donington Park and finishing fifth in Japan.

The start of 1994 continued that promise – finishing third in the Pacific GP and qualifying on pole position in Belgium’s changeable conditions. But he was hurt in a frightening practice accident at Imola in a prelude to the dreadful weekend that claimed the lives of Roland Ratzenberger and Ayrton Senna. His Jordan 195-Peugeot finished second in the 1995 Canadian GP to reinforce that the young Brazilian belonged at this level.

He joined the new Stewart-Ford concern in 1997. Three seasons with the team had its outstanding moments such as second in the wet 1997 Monaco GP and pole position for the 1999 French GP. But it was team-mate Johnny Herbert who won that year’s European GP at the Nürburgring, Barrichello part of the joyous celebrations but on the third step of the podium.

Barrichello’s career was defined by his move to Ferrari in 2000. True, it yielded an emotional first victory at a wet Hockenheim, coming from 18th on the grid, but he was very much Michael Schumacher’s number two. That subservience was challenged during the 2002 Austrian GP when an inspired Barrichello qualified on pole position and dominated his illustrious team-mate for once. But as the unchallenged Ferraris exited the final corner he obeyed instructions from the pitwall and let Schumacher through to win. It was a decision that brought a tear to Barrichello’s eye, condemnation from the wider world and an FIA ban on team orders that lasted the rest of the decade.

Six seasons with the Italian team included nine victories and runner-up spot in the 2002 and 2004 championships as Schumacher won five titles in a row. However, this popular team player was now frustrated by his role in the Scuderia.

He moved to Honda in 2006 but it was only after the Japanese manufacturer withdrew from F1 that Barrichello enjoyed another tilt at the title. The winter leading up to the 2009 season was a disconcerting period for anyone connected to the team. Rubens was confirmed late and initially struggled in the now competitive and re-branded Brawn Grand Prix.

Team-mate Jenson Button won six of the first seven races but the Brazilian grew ever-more competitive as the campaign unfolded. Barrichello won in Valencia and at Monza (his first victories in five years) to briefly threaten a jittery Button. The Englishman recovered his composure to clinch the title but third in the World Championship was a welcome return to form for Barrichello nonetheless.
Now the most experienced driver in F1 history, Barrichello joined Williams-Cosworth for 2010. He finished fourth in Valencia but was almost squeezed into the pitwall when passing Schumacher in Hungary. He remained for a frustrating and uncompetitive second season with the team but lost his place in F1 at the end of 2011 after 19 seasons and a record 323 GP starts.

Replaced by the better-funded and younger Bruno Senna, Barrichello instead joined KV Racing for a single Indycar season in 2012. He brought a welcome star quality to the midfield as he finished 12th in the championship. Third on the grid at Milwaukee, he finished fourth at Sears Point before switching to Brazilian V8 Stock Cars for 2013 – winning the 2014 title and finishing as runner-up two years later.

He also made selected start in North American sports car races at that time and he finished second for Wayne Taylor Racing in the 2016 Daytona 24 Hours. A year later Barrichello joined Racing Team Nederland for his debut at Le Mans when sharing an LMP2 Dallara P217-Ginson with Jan Lammers and supermarket owner Frits van Eerd. They finished 11th in class when 22 laps behind the winning Jackie Chan DC Racing entry.