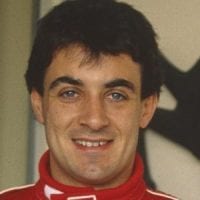 Some stars are defined by results and some by their character. Jean Alesi falls into the latter category but charisma alone does not win the World Championship. His Formula 1 record is that of a nearly man – on the podium 32 times but a winner just once.

Emotional, spectacular and driving Ferrari number 27 – this Frenchman evoked memories of Gilles Villeneuve. But perhaps it was the 1990 United States Grand Prix that cemented his place in the public’s affection when he battled Ayrton Senna’s McLaren-Honda for the lead – the Tyrrell underdog undaunted by F1’s superstar.

His Sicilian parents settled in Avignon and Giovanni Alesi’s character reflects those Latin roots and French upbringing – at once fiery and urbane. Rallying was his passion as a youth but he started to race in the national Renault Five series in 1983. While others benefited from support from Marlboro France or Elf to fund their single-seater career, Alesi initially had no such benefactor. He set up his own team with his brother José for Formula 3 in 1986 and finished as a surprise runner-up behind the all-conquering ORECA team and Yannick Dalmas.

Alesi joined ORECA for 1987 but the pre-season favourite suffered when his new Martini MK52-Alfa Romeo proved uncompetitive. The team eventually agreed to switch to a Dallara F387 chassis and Alesi held off Eric Bernard to clinch the title. He remained with ORECA for the 1988 Formula 3000 season and his Reynard 88D-Cosworth finished second at Pau but it was a disappointing year.

Disillusioned and dropped by Marlboro, Alesi switched to Eddie Jordan’s Camel-backed team and proved the revelation of 1989. His Reynard 89D-Mugen won three times as he clinched the F3000 title with a round to spare. Not only that, but he was outstanding on his GP debut for Tyrrell when fourth in France. He repeated that result in Spain and was ninth in the world championship after just half a season in F1.

Then came that opening GP of 1990 – Alesi leading at Phoenix before finishing a fine second behind Senna. He even had the temerity to retake the lead for a time after the Brazilian had eventually passed him. The Tyrrell 019-Ford was a nimble machine and Alesi was second again on the streets of Monte Carlo.

Those performances made Alesi the most wanted man in F1 and at one stage Tyrrell, Williams and Ferrari all claimed he had signed for 1991. He eventually joined the Italian team but how different would his career have been if it was Alesi in a Williams-Renault rather than Nigel Mansell and Alain Prost in 1992 and 1993?

The Ferrari years and his one Grand Prix win

Instead of fighting for the championship, he suffered as the Italian team went into decline. His reputation in the grandstands remained unaffected – his hard charging, never-say-die driving style was loved by the tifosi but three third-place finishes were as good as it got in 1991.

He repeated that result in Spain and Canada during 1992 and was second at Monza a year later. Having missed a couple of races at the start of 1994 after injuring his back testing at Mugello, he finished second at Silverstone and appeared on course to win the Italian GP after starting from his first pole position. Alesi dominated the race before his Ferrari 412TB’s gearbox failed.

His luck finally changed on his 31st birthday when Alesi benefited from Michael Schumacher’s retirement to win the 1995 Canadian GP. Few victories have been more popular but it was a rare occasion when his luck and speed coincided. Again robbed of victory at Monza by a failed wheel bearing eight laps from the finish, another four second-place finishes brought him to fifth in the 1995 World Championship.

Alesi left Ferrari at the end of the season when the team signed reigning champion Schumacher. Both he and erstwhile Ferrari team-mate Gerhard Berger moved to Benetton and he was fourth in the championship that year and third in 1997 (after Schumacher had been disqualified). That suggests a consistent and reliable performer but the increasingly volatile Frenchman was anything but.

His uncompromising race craft sometimes verged on dangerous and incidents too often spoiled his race. Alesi’s talent was evident from time-to-time only to be thwarted when victory seemed in sight – losing the 1996 Monaco GP with suspension failure for instance. He qualified on pole at Monza 1997 but had to settle for another second-place finish when beaten by David Coulthard in the pitstops.

Alesi’s relationship with Team Principal Flavio Briatore never recovered after the Frenchman failed to pit for fuel during the 1997 Australian GP. He moved to Sauber for the next two seasons when front row starts in Austria 1998 and France 1999 were rare highlights. Alesi then raced for Prost Grand Prix before switching to Jordan for the final five races of 2001 – retiring from F1 after 201 GP starts.

He switched to the DTM in 2002 with Mercedes-Benz and remained in the series for five years – finishing fifth in the standings those first two seasons. Alesi raced a GT2 Ferrari 430 for AF Corse in the 2010 Le Mans Series and was class runner-up with co-drivers Toni Vilander and Giancarlo Fisichella. But his 2012 debut in the Indianapolis 500 was ruined by uncompetitive Lotus engines and he was black-flagged from the race after nine slow laps.