Sunday, we’re told, will be a scorcher – a contender for one of the hottest World Championship Grands Prix of all time as ambient temperatures flirt with the low 40s. Moisture is likely to come only from perspiring brows.

That’s a traditional motif for Budapest summers, but Formula 1 faced a different challenge seven years ago – a cool, wet Hungaroring. 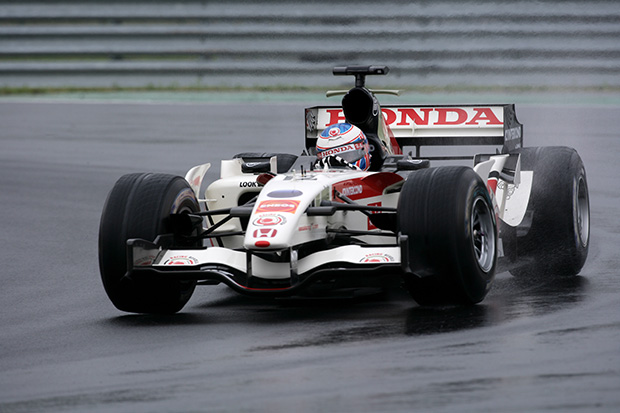 The sport had been framed by controversy during the build-up, with the FIA banning the use of mass dampers one race earlier in Germany. Designed to reduce pitch sensitivity and maintain ride height consistency, the system had been pioneered by Renault late in 2005 and used throughout 2006 until the FIA declared it illegal. At the time, there was a feeling that Ferrari had brought pressure to bear, not because it objected to the technology but because it hadn’t been able to make its own system effective… “The races,” said Renault team principal Flavio Briatore, “are being decided by the referee rather than the players.”

The stewards were soon busy when action began in Hungary, Renault’s championship leader Fernando Alonso being handed a two-second qualifying penalty after brake-testing Red Bull reserve Robert Doornbos, who had impeded him during Friday practice. The Spaniard was also charged with having overtaken under yellow flags.

On Saturday it would be his closest rival Michael Schumacher’s turn. The German was found guilty of overtaking under red flags during the final practice session, which was stopped while marshals retrieved Jenson Button’s Honda following a spectacular engine failure (a subsequent change earning the Englishman a 10-place grid penalty). 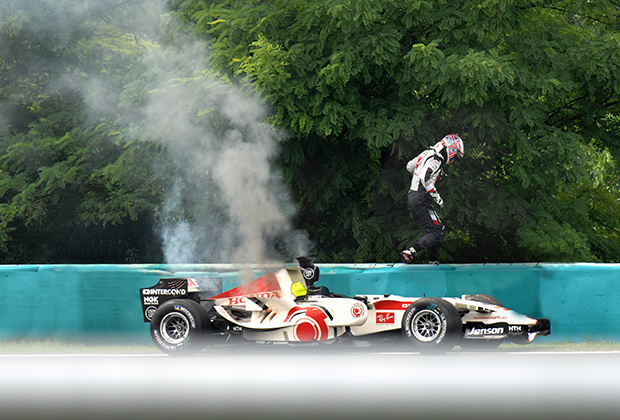 Once all sanctions were applied, Kimi Räikkönen took pole for McLaren, ahead of Felipe Massa’s Ferrari, while Schumacher started 11th, Button 14th and Alonso 15th. Things didn’t stay that way for long. By the soggy opening lap’s conclusion, Schumacher was fourth and Alonso sixth, while Massa had reversed to seventh and Button’s progress was solid if a little more cautious: he lay 11th. Alonso and Button would continue to edge their way forwards, but things soon became tougher for the German: Michelin-equipped cars had an advantage in these conditions and Schumacher’s Bridgestones were unable to keep pace.

McLaren drivers Räikkönen and Pedro de la Rosa initially ran first and second, but ceded the lead to Alonso after making tyre stops (laps 17 and 16 respectively). The field was soon quite distantly spread, with Alonso leading from Räikkönen, de la Rosa, the quietly impressive Button, Rubens Barrichello  (Honda), David Coulthard (Red Bull), Nick Heidfeld (BMW) and Schumacher (now lapped, after an unscheduled stop to replace the front wing he’d damaged against Giancarlo Fisichella’s Renault). On lap 27, however, everything bunched up again following the race’s neutralisation. Toro Rosso driver Tonio Liuzzi had eased up to allow quicker cars through… and the dozing Räikkönen piled into him, scattering debris far and wide. 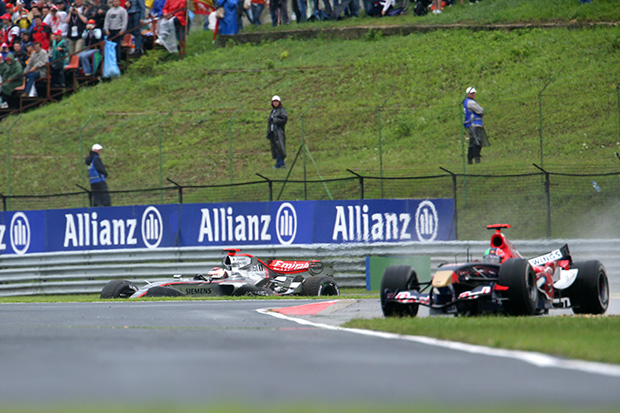 Most of the leaders used the safety car break to fit fresh rubber – although conditions weren’t yet fit for dries – but Button and Schumacher stayed out. When the race resumed, Alonso led from a group of lapped cars and then Button. The traffic enabled the Spaniard to build a reasonable gap, but Button was appreciably faster once he found clear air and by lap 43 the two cars were as one.

Button took the lead on lap 51, when Alonso came in for his final scheduled stop. He opted for dry Michelins, but his right rear wheel nut sustained damage during the change and worked loose by the time he’d reached Turn Three. The Renault wobbled off to the right and spun gently into the tyres, its race run.

In the surviving McLaren, de la Rosa had also plumped for dry rubber and was soon setting fastest laps. Button responded on lap 54, a quick Honda stop maintaining his advantage. Schumacher, meanwhile, gambled on keeping his intermediate rubber while others pitted, a decision that moved him up to second but soon made him easy prey. While Button stroked to the flag, the Ferrari driver became involved in an increasingly wild series of incidents as others queued up to pass. It took de la Rosa several attempts – and a few banged wheels – to get through… and at one stage Schumacher stayed ahead simply by short-cutting the chicane. 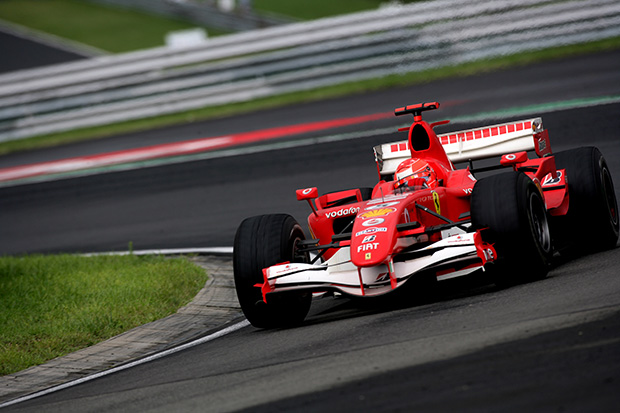 This spat allowed Heidfeld to close in – but the Ferrari proved no easier to pass. Just as the younger German appeared to have done the job, however, Schumacher suddenly slowed. “A track rod broke as Heidfeld went past,” he said, as though this were outrageous bad luck rather than collateral damage. Heidfeld took third, from Barrichello and Coulthard, while Schumacher hobbled back to the pits to be classified ninth, three laps down, although he would later gain one place (and a potentially useful championship point) when newcomer Robert Kubica’s BMW was excluded from seventh place,

The impressive young Pole had completed the final 51 laps on the same set of intermediates – and wore away enough rubber to put his car below the minimum weight limit.

Button had been touted as a Grand Prix winner from the moment he made his F1 debut with Williams in 2000, but it had taken 113 starts to break his duck. “Wow,” he said, “what a day. Winning feels normal already. It’s amazing. The weather made the race very difficult for everyone, so to come through from 14th and win… I couldn’t have done it in a better way. We didn’t just go out with the best car and win. We thought hard about this and won through a mixture of speed and strategy.” 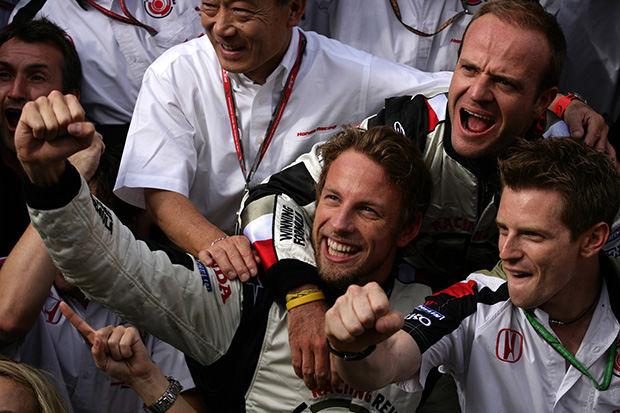 He didn’t have too much time to savour the moment, however, because he had to catch an early-evening flight in order to fulfil impending PR commitments… in Shanghai. “I think my dad will look after celebrations,” he said. “I could see his face when I was standing on the podium – and from his expression I’d guess that he plans to stay here tonight.”