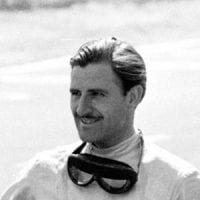 Perhaps the most charismatic and popular Formula 1 driver of the 1960s. Graham Hill may not have been blessed with the natural talent of a Jim Clark or Jackie Stewart, but he more than made up for that in sheer determination and effortless charm. Twice World Champion during his 176 races as a Grand Prix star, he remains the only driver to win the Monaco GP, Indianapolis 500 and Le Mans 24 Hours.

Hill left Hendon Technical College to take up an apprenticeship with instruments manufacturer Smith’s. He broke his hip in a motorcycle accident but despite having one leg shorter than the other as a result, Hill then completed his National Service in the Royal Navy in 1950. He was a stroke for the London Rowing Club and both he and his son would adopt their colours as their helmet design.

Already 24 years old, Hill first drove a racing car at Brands Hatch in 1953 when he paid £1 to complete four laps in a Cooper. Determined to make his way in the sport, Hill left Smith’s and worked as a mechanic at the circuit and for 500cc Formula 3 champion Don Parker in return for sporadic opportunities to race. It was at the August Bank Holiday meeting in 1954 that Hill hitched a lift back to London with Colin Chapman and he soon joined Lotus as a mechanic.

He drove a Lotus 11 sports car during the 1956 club season and won races at Brands Hatch and Silverstone. The pattern continued a year later with Hill’s car now entered by E.G.Manton.

The ever-more ambitious Chapman introduced the F1 Lotus 12-Climax at the 1958 Monaco GP with Hill and Cliff Allison as drivers. It was a race of attrition and Hill had climbed to sixth position before he too retired. Chapman’s designs had a reputation for being fast but fragile and Hill retired from the next six GPs before his Lotus 16 finished sixth in the Italian GP – some eight laps off the pace. Hill should have made his debut at Le Mans that year but Allison was forced to retire their Lotus 15 after just three laps when the 1965cc Climax engine blew a head gasket.

Hill endured further frustration during the 1959 F1 season with seventh in the Dutch GP a rare finish. Even then, he lost a lap and a promising fifth position when he had to stop to investigate why smoke was filling the car’s cockpit. That team-mate Innes Ireland, who had been running behind him at the time, went on to finish fourth (to match Lotus’s best result to date) must have been galling.

Frustrated after two seasons of failure and no sign of progress, Hill switched to BRM for 1960. The Bourne concern had just won the 1959 Dutch GP thanks to Jo Bonnier and they saw Hill’s engineering background as crucial as it developed the new P48. He qualified on the front row for the opening round in Argentina and finished third in the Dutch GP at Zandvoort – his best result so far. Hill appeared on course for a breakthrough victory when he took the lead of the British GP with 22 laps to go. However, he was suffering brake problems and he spun at Copse with just five laps – stalling and handing the win to World Champion Jack Brabham.

In keeping with the other British teams that were not ready for the new 1.5-litre F1 rules, BRM were handicapped during 1961 by having to run uncompetitive four-cylinder engines before its new V8 was ready. That was not until the Italian GP and even then, Hill only ran the unit during practice. Fifth in the United States GP, despite a pitstop to reattach his magneto, was Hill’s best result of the year. That Lotus won its third GP that day (and the first for the works) team led to questions as to whether Hill had made the right decision to leave.

However, any such doubts were erased in 1962. The V8-powered BRM P57 was now fully sorted and Hill won non-championship races at Goodwood and Silverstone before the season proper began. That promise was confirmed in the Dutch GP as Hill took control after the impressive Clark was delayed in the pits for nine laps – finally scoring his maiden GP win. Engine failure with eight laps to go lost certain victory in Monaco and he finished second behind Clark after qualifying on pole for the subsequent Belgian GP. Back-to-back victories in Germany (despite a fire extinguisher loose in his cockpit) and Italy were followed by second-place at Watkins Glen behind title rival Clark. That set up a winner take all showdown in South Africa – Hill clinching a fourth win of the year and his first World Championship when the Scot retired from the lead.

His title defence in 1963 included the first of five Monaco GP victories (eventually earning the sobriquet “Mr Monaco”) but the reliability that had been crucial a year earlier had deserted the team. He also won the United States GP and scored a couple of third-place finishes as he tied team-mate Richie Ginther as runner-up behind Clark.

Hill was part of the drama that defined the 1964 World Championship. Further victories in Monaco and the Unites States plus three successive second-place in the middle of the season gave Hill the chance of snatching a second crown at the Mexican GP finale. In the event, he made a poor start but he soon climbed to third. That would have been good enough to win the championship but he was hit by Lorenzo Bandini’s Ferrari as the Italian attempted to pass. Out of the race, Hill’s hopes lay in tatters before the dominant Clark retired on the last lap. Hill was briefly “World Champion” once more but Bandini let team-mate John Surtees by to claim that prize. He also shared a Maranello Concessionaires Ferrari with Joakim Bonnier in selected sports car races that year – finishing second at Le Mans and winning the Reims 12 Hours and Paris 1000Kms.

There was no stopping Clark in 1965 although Hill won at Monaco while the Scotsman was busy beating the regulars at Indianapolis. Although unable to match his rival, Hill finished every race bar one (including another US GP success) and was second in the World Championship for a third successive year.

Although 1966 proved frustrating in F1, with Hill failing to win a GP for the time since 1961, the year provided one of his most important (and lucrative) victories of his career. Walt Hansgen was slated to drive one of John Mecom’s Lola T90-Fords in that year’s Indianapolis 500 but the veteran died a week after crashing during April’s Le Mans test weekend. Hill was drafted in as his late replacement and the rookie qualified the “American Red Ball Special” on the outside of row five. Having avoided the first lap melee, Hill inherited victory when his team-mate (that day and in F1) Jackie Stewart retired with ten laps to go. Having recently learnt to fly, Hill used his winnings to buy a light aircraft which he used to travel to races.

Hill returned to Lotus in 1967 when accepting the challenge of direct comparison with the mercurial Clark in Chapman’s team. The team had an exclusive contract with Ford to develop the new Cosworth-designed DFV engine. Second in Monaco driving an old Lotus 33-BRM, he qualified the new Lotus 49-Ford on pole position for its debut in Holland although he retired from the lead. Mechanical failures in the next four GPs denied probable victories in France and at Silverstone. He was second at Watkins Glen and finished sixth equal in the championship.

The 1968 F1 season began with the South African GP at Kyalami and Clark led Hill in a Lotus 1-2 to signal new-found reliability to go with the car’s undoubted pace. However, Clark was killed at Hockenheim during a minor F2 race before the next round of the World Championship. Hill showed his courage and fortitude as he led the grief-stricken team – winning the next two GPs in Spain and Monaco. Second in Germany and the United States, he won the Mexican finale to clinch a second world title.

Second in the 1969 South African GP and Race of Champions, he survived a frightening accident when his high aerofoil collapsed during the subsequent championship round in Barcelona’s Montjuich Park. He won the Monaco GP for a fifth time (a record that would last until 1993) but he suffered a puncture during the penultimate GP at Watkins Glen and crashed heavily. Hill was thrown clear and broke both of his legs. His cheerful reaction to his extensive stay in hospital (giving a televised phone conversation on the following Monday) only served to heighten his popularity.

Any thoughts of retirement were brushed aside and Hill returned at the start of the 1970 season. He drove Rob Walker’s private Lotus 49C-Ford that year and scored points in the first three races despite his continued difficulty even walking.

He moved to Brabham in 1971 to replace the retiring team owner. Victory in the International Trophy provided Hill will a popular final F1 success but he finished no higher than fifth when points were on offer. He also drove a Rondel Racing Brabham BT36-Ford in F2 and won at Thruxton for the Ron Dennis-owned team.

A second F1 season with Brabham included fifth-place at Monza but it was again away from that category that he scored a famous victory. He joined Matra-Simca for the Le Mans 24 Hours to share a Gerard Ducarouge-designed MS670 with Henri Pescarolo. They survived the wet conditions to deliver France’s first win in the race for 22 years in front of President Georges Pompidou, 10 laps ahead of the sister Francois Cevert/Howden Ganley car.

Now long past his prime as an F1 driver, Hill had a new project for 1973 – using sponsorship from the Embassy cigarette brand to form Graham Hill Racing. His Shadow DN1A-Ford was ready for the Spanish GP but it was not a competitive affair. Hill ran near, or at, the back with ninth at Zolder his best result.

The team expanded to a two-car outfit in 1974 with Lola commissioned to build a new DFV-powered car. The somewhat heavy T370, complete with oversized airbox, was not a success although Hill did finish sixth in Sweden – scoring the team’s only point that year.

The Lola was reworked and renamed the Hill GH1 when it was introduced at the 1975 Monaco GP. However, he failed to qualify for the race that he had once dominated and he decided that it was time to concentrate on running his team. Hill eventually announced his retirement on the eve of the British GP but it had already been a season of tragedy and much promise for the team by that time. Rolf Stommelen was leading the Spanish GP in Montjuich Park when he crashed over the barrier with tragic consequences – a spectator, a marshal and two photographers all killed. Both future World Champion Alan Jones and most particularly Englishman Tony Brise showed great promise in the car. Jones was fifth in Germany and Brise sixth in Sweden; the latter’s sixth-place on the grid at Monza confirming an upwardly mobile team and a potential new star.

That was not to be for, returning from testing at Paul Ricard that November, Hill crashed his Piper Aztec aircraft on approach to the airfield at Elstree. Hill, Brise, designer Andy Smallman, Team Manager Ray Brimble and mechanics Tony Alcock and Terry Richards were all killed in the accident.